Happy birthday to me, thanks nobody, you dip shits.SOoooooooo nobody remembered my birthday so yall can eat hot dog shit. May third motherfuckers. What the hell, it's not like I have been constantly dropping hints that I am a Taurus or anything. Then I read my horrorscope for my birthday and it was like "Yep, bitch, nobody gives a FUCK about you even your legion of fans on the computer club."

About the only person who remembers shit about me is Tank who me and him have this birthday tradition where we get curly sued which is where you go to the Great Alaska Bush Company where the actress who was curly sue will lap dance you and then put on a glove and give you a prostate jerkoff in the kitchen which is fucked up because the dishwasher dude Lopez just stands there and looks at you like "what I'm sorry I didn't know it was a latin kings meeting up by the hot sink motherfucker why don't you keep your eyes on those tear drop tattoos I'm getting my tug on."

So anyway now this campaign thing is over and it's like a million years until anybody actually votes and you dumbasses all know mitch romney is gonna win, right? Oh, you don't think so cuz of incombonts? They got a law in Pennsylvania where when you go to vote they hold up a color wheel next to your head and if you're one shade off eggshell they make you give them a picture of yourself being born just to vote. When I was on the campaign they showed me the room where all the latino votes are going to go and it was just a fat guy with a pitchfork throwing bales of votes into a shredder while a bunch of billionaires watched through a law and order window. Fuck I don't even think Michigan has polls anymore. 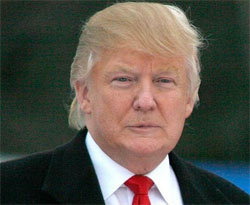 I know this dude seems about as cool as a rapping granny but turns out if you have a lot of money you can fuck basically anyone you want. who knew?I had to find something else to do with my time like analyzing shit and political things and then I realized I had donald trumps phone number from that time we were staying at the same hotel in New Jersey and we met in the bar. I went baller squad on him and took his wing. While he was offering to buy faberjay eggs for this girl that looked like an orange tina fey with frosted tips and a cannonball boob job I rolled in on her friend and took two barrels of fatness.

I think they ended up having choking sex in a helicopter or something. I don't remember. I did a shooter of liquid peyote and had a vision quest where I was a color and a smell at the same time and my spirit animal was that dog Toby that paints lines on carpets with his turd cutter. When I woke up I was stuck in the ventilation at a KFC/Taco Bell combo and the fire department had to jaws of life me out of there. The weird part was that place is open 24 hours and nobody remembers me climbing in the vent so I think I astral projected. Cross that motherfucker off the bucket list.

Point is me and the donald go way back, so I called him up and I was like "dude look I know you are all up on Sarah Palin's pussy hole like greta van sustern fantasizing in a bathtub but bros before hos dude." Of course donald obeys the guy code which is don't snitch and bros before hos and also a little bit of like gay stuff is okay but only if you act super anti-gay in public. He was like "Okay, you can job shadow me, but on one condition: no bullshit." 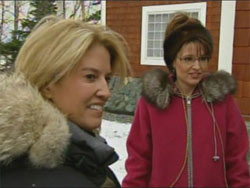 *in a witch's voice* ohhhh greta I never knew I had these feelings until I met youuuu...I was like I don't even know what the fuck bullshit is dude I one time got tricked by some hillbilly in the panhandle that an alligator was a Florida horse and they gave me a saddle to put on it and ride it around and joke was on those motherfuckers because on a dare I went eight seconds on a zoo hippo so an alligator might as well have been secretariat. I had that bitch doing lipizzaner shit in two minutes and was like "what now you skunk ape motherfuckers I will ride a shark and teach it to count with its hooves."

I was super excited to hang out with donald trump. He flew me to New York in his jet plane, then his helicopter that landed at his building and I was like "dude you got it made everything is shit you own" and he was like "that's just the start of it" and he pulls off this little blanket and there is a huge cookie cake that said "welcome to new york levi" and had a picture of me drawn in chocolate icing and he was like "I own this shit too so guess what motherfucker full on custom cookie cakes for any occasion."

I started following him around after that and most of the time I would just keep quiet. Basically he would have me around to stand over next to him at a meeting and then when the guy was saying stuff Donald didn't like he would turn and look at me and say "Do you believe this frigging guy?" and I would be like "Nope fuck no that is the dumbest thing I have ever heard." But after like two days of this he flew me out to Las Vegas and I was like sweet sin city we are going to go buck wild on this town.