WHAT THE FUCK IS UP AMERICA???

ARTICLE BY ME LEVI JOHNSTON WADDUP?HELlo my name is Levi Johnston but you can call me Hockey Johnston or just Hockey if you want. Might of heard of me. I'm the dude that knocked up Bristol, Mrs. Palin's daughter. The older daughter. Willow is H.A.F. 2 but im just talking about Bristol. I only tore that up. Not Willow. Ever.

So whats up. I just wanted to introduce myself to America. Say how are things with you and whats going on.

Things have been really hecktic for me. First I found out Bristol was pregnant and I was like...you know...whoa. Not on my watch. Lets find you a doctor. You know what I'm saying?

But Bristol was all blah blah blah gods plan this and blah blah blah a brother for my other son that her mom gave some crazy ass name like tranquilizer or some shit. I don't know what the fuck is up with that but that baby sucked anyway it had fetal alcohol syndrome or some shit. Mrs. Palin parades that baby around like its hers and even feeds it from those sweet ass titties shes got so im cool with that. 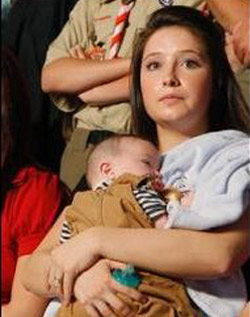 theres bristol with the fucked up baby we got rid of her mom calls it like trang or some shitMaybe I need to get me some fetal alcohol you know what I mean. Drank that shit down and then chug on Mrs. Palin's titties. Hahahah fuck yeah nigger!

Naw, but Bristol wouldn't get no abortion and I was like "damn girl your pussy is all ripped up already lookin like dried apricots you cant handle two of them motherfuckers coming out you." She refused to talk to me so I just took that shit to the ice and took it out on some faggot ass goalies. Scored all in their shit.

Then me and Doofus and Bluto drank some labatts and went out on the 4 wheelers and shot at some shit with our shotguns. I shot the fuck out of some crazy cow or something. Doofus said he shot a dinosaur but it was just a big bird with a white head and then we ran like fuck because Bluto heard the rangers and said we would get fined crazy money and be in the paper and everything for killing a dinosaur.

Pretty much everything is cool now though. Bristol called a couple days ago and said her mom is gonna be something called a "VEEP." I guess its pretty big and that old dude with the face is the veep now but he is leaving or retiring or some shit and Mrs. Palin is going to take over. I was all like "what the fuck do i care did u call the doctor about getting that baby the fuck out of you???"

Bristol calmed me down though she said she could get this surgery from a doctor called a C-section and then her pussy would still be hella tight and if the baby was all fucked up and crazy again we could just throw it away and pretend it died from like baby shit like a rattle or something. Then she said the cool part was when her mom becomes VEEP she is like real powerful and that makes Bristol like a princess and then by extension i become like a duke or a baron or something. A Lord maybe.

More Johnston Checks In Next