WHAT THE FUCK IS UP AMERICA??? 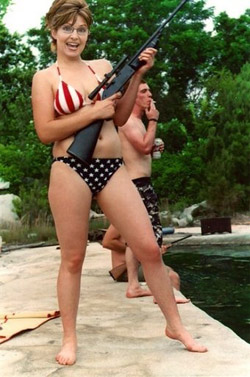 dont lie to me nigger you know you would be all up in that bitch if she just dropped them panties and was like whatI think that is bad as fuck. Lord Levi Johnston, your table is waiting. Lord Johnston, do you mind if I model this lingerie for you? Ha ha ha just kidding I am totally 100% faithful to willow.

I don't know how it all worked because I was fucked up as hell on oxy and everclear when they was telling me on the plane but I guess like Mrs. Palin married some other dude to become VEep. I guess thats cool because Todd is a total chodesworth. She fucks everybody and he is too busy driving around in snow machines and fuckin fishing or some shit to even notice. This other dude that Mrs. Palin is marrying though is like 1000 years old and he always looks pissed.

I met him at the airport and I think the dude was like...I don't know man...like maybe a little bit dead. Like can you be 80% dead? Maybe about there. He just sort of growled and showed me these yellow teeth and then disappeared into a black truck. Whatever. As long as I get to be a Duke or some shit I don't care what monster MRs. Palin is takin' a sausage from. Could be wolf man for all I care.

The important thing is Bristol can get that surgery so her pussy doesn't fall out of her ass or whatever. Then before I went in there to the convention they gave me this gay ass haircut and made me wear a special shirt. They had me wright down all kinds of shit and answer a bunch of stupid questions like "what sort of shit do you love?" I totally put bristol down as number 1 because i always know how to answer that shit the way they want. Then i was like #2 america, best country ever, and #3 hockey. Woulda put Brooks & dunn and carharts too but i figure 3 was enough numbers. 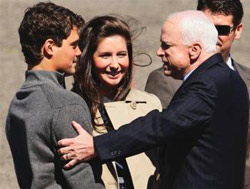 i still feel like i might be 10 percent dead after the old ass dude touched me with his grim reaper clawBristol said her mom is running against a black guy. One guy on the plane with us said the black guy had more experience but he was like a senator and i was like "uh hello mrs. plain was a GOVERNOR and a WHITE LADY" I think that counts for a little more.

Everyone is all freaked out about the media. I guess their righting articles about me and bristol having a baby or whatever and first off FUCK THEM second off I HAVENT SEEN DIME ONE. they cant just talk about me for free this is america. their using my name to sell there tabloid sleebs.

I will KICK THEIR EFFING ASSES if they start coming around here trying to mess with me or my girl.

Anyway, america whats up? whats on your mind? ne hot chicks out there reading this shit?

fuck this righting shit is gay as shit

More Johnston Checks In Next