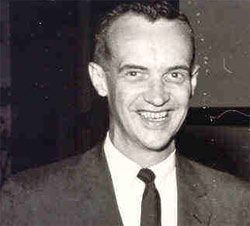 Hello, my name is Dr. Wodenferd and I am a certified Doctor of the Impossible Sciences. I have been observing the present and predicting the future since 1958. Some call me a futurist, others ridicule me as a fabulist, but I have achieved a record of accuracy that has only been bested by seven other Impossiblists and six of these were Eastern Mystical Impossiblists who jeopardize their very souls to foretell future trends.

As you well know, I am a Christian Impossiblist and I would never sacrifice my faith in Jesus Christ to make a quick buck from one of those trashy Journals of Impossiblism. I self-publish all of my own findings. 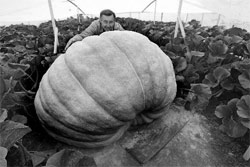 A man of yore? No, just a giant pumpkin, as predicted by me in 1985.On the World Wide Web I have read that the study of ancient skeletons has proved with science that the human body has increased in size since its inception. A man of our day stands an average of five feet and eleven inches. From that I have calculated that a man from one hundred years ago would barely have come to our titanic shoulders. A thousand years past the men were only to our belts.

Travel back ten thousand years - and science has proved this beyond the doubt - a man was only one foot tall. Go back even before this, to our ancient forebears, and science knows the very first man was only a speck. These primitive men hunted mites and built their shelters from dandruff. They were so tiny that a million could live in the feathers of a sparrow.

To think, coming from that miniscule existence to a strapping man of nearly six feet! You can see we have grown to an immense size in what is, to the ageless mountains, a very short time indeed. It should come as no great surprise that within the passing of only one more decade men are expected to be born already nine feet tall. These immense babies will grow to 30 and possibly even 40 feet in height as adults.

A fine time, looking over the top of a church, but not so fast! Women will not grow at all, remaining as they are and as they always have been. Conception will be difficult and there will be a terrible reduction in the rate of births. Though men will be larger, the decrease in population will mean there will be the exact mass of men in 100 years as there is currently. Such are the bitter ironies of the future.

I'd bet my house on that one!
Breakthroughs in Absorbency? 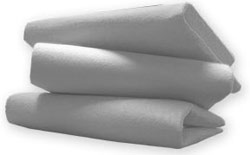 The so-called "super shammy" may one day save your kitchen from a stain disaster.The age old dilemma of the housewife: the juice has spilled and yet the towel cannot take up any more liquid. Could this conundrum be at an end? A shouting man on the television has just announced a breakthrough in absorbency that more than trebles the effectiveness of current towels. This unbeatable stain destroyer seems to be made up of multiple layers of space-age polymers that trap moisture. This means no more dribbling as you carry the towel to the sink.

And when you wring it out? The gush of liquid was incredible. I did not have my glasses on when he was talking, but I believe these items, of course just prototypes at this early stage, can be got for $1,999. Too much for the housewife on her limited allowance, surely, but if the principles behind these new ultra-absorbent towels are sound then expect to see mass manufacturing and a commensurate drop in price. After all, the radar range once cost more than a Buick, but the one I purchased in 1983 barely cost a fraction of that amount.
I predict that within in three years every home in America will have one of these incredible devices and that we will talk of spills in much the same way we laugh of ring around the collar. You could bet your house on this if you were so inclined.

A New Sort of Music? 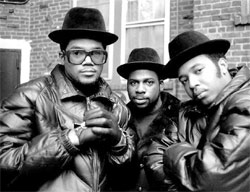 My anglocentricity has sometimes been mistaken for crude racism, but make no mistake, I have great respect and affection for American blacks and their advances in musical science.Word has come to me through channels both academic and esoteric that American blacks are on the cusp of achieving a breakthrough in musical science. Not since Jellybone Samson first hooted upon a jug has American musical science felt such an upheaval. Called "rap talking", the technique blends the use of a computerized "beat box" synchronized with a man speaking.

Of course, the blacks will talk about the things such as they do. Their dancing and their shenanigans, and I mean them no offense, but their concerns are baser. Imagine the power of the beat box if unlocked by the likes of Buddy Murphy or Sweet Dan Michaels. The white musical scientist could transform this rap talking into a revolution akin to the discovery of the violin. Imagine, the beat box blurting out its tune, and a well-dressed gentleman speaking calmly about mathematics or aeronautics.

Within ten years the first white rap talker will unlock the secrets of the beat box and change the face of musical science. You can bet your house on it!

No parlor trick, these. I offer honest predictions of the days to come.

My predictions, as always, come with no legal guarantee of accuracy. However, I promise that these are certainties you can bet your house on!