Kicks Online is a huge pile of garbage that has made me lose all respect for soccer. As a former soccer player I can tell you that Kicks Online has nothing to do with the sport. Sure you kick a ball at people but thats about the extent of the soccer experience that Kicks Online has to offer. As far as fun goes, I would rather pull hairs out of my balls one by one than play this horrible waste of computer programming. 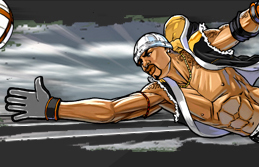 Steroids can't seem to stay out of any god damn sport.Every two weeks I spend countless hours playing horrible games to write some article that may or may not be read. This time I decided to pick a little game called Kicks Online that was created by whoever is in charge of Eastern Europe (I heard it was a woman). I didn't really bother to find out who made this game but having to play it put me in such a state of apathetic hopelessness that I didn't really care to.

The controls were designed by someone who is either the dumbest mongoloid that stinks up Earth or by some sadistic former SS officer that wants your fingers to break every time you decide to pass the ball to some moron who is just going to shoot it at half court. Filled with more bugs than a rotting corpse and graphics resembling something along the lines of "flinging shit at a computer screen," Kicks Online is one of the worst games I have had the agony to review.

Kicks Online appeals to the "too fat to actually play sports" demographic that are so glued to their computers that they can't actually go outside and you know, play soccer. The community can't quite grasp English as they either don't speak it (god damn South Americans) or they are the same group of idiots that can't spell "trombone." Every other comment is either "pass n00b" or "u suk" from a community of moronic kids that seriously have me worried about the future. I think that technology will finally stop evolving and we will plummet back into the stone age once the brain dead generation of teens grow up and take over.

YAY! A GAY PILE!!!
It should be known by now that no one wants to work as a team with anyone else in any game. Look at World of Warcraft; the most popular MMO of our time doesn't even force you to talk to another player until you reach the level cap and are so bored with your meaningless life that you decide to devote ten hours a night killing internet dragons. Kicks Online, however, forces teamwork onto you from the get go. This fails miserably as everyone I ever played with ran for the ball, rushed up court and shot against the computer controlled goalie which may as well have been a giant brick wall. Occasionally, the game would bug out and someone would score a goal resulting in one of many hilariously stupid victory dances.

Though the community is rather small (probably 100 people tops), it has to be one of the dumbest and most incoherent groups of people I have ever had to experience. Apparently Brazilians rule the Kicks Online world as every public game was named something along the lines of "NO BRAZILIANS" or "BRAZILIANS GO AWAY".

Perhaps all of my anger is due to playing soccer through seven years of my childhood and seeing it molested (figuratively you idiots) by the cold left hand of the MMO uncle (also figurative). That actually has me wondering... why hasn't some creepy company (most likely in Japan) made some child molester game? Oh wait, that's right! Second Life.

No man can look tough when he has a deformed love hat.If any of you are angry about me making fun of child molestation then you may feel a bit of the anger I felt when playing Kicks Online. In fact, the game would crash so many times trying to launch that I was in a nice fit of nerd rage before I could see the dumb gangster themed loading screen. The last time I checked, Basketball was the token sport of "the hood," or at least that is what I am told in movies. I really can't see a bunch of murderers, rapists, or monsters who illegally downloaded music playing soccer in the prison yard. Basketball, however, has always been ripe with crime and mafia ties. Soccer was a good, wholesome sport for the whole family until Kicks Online got it's grubby hands on it.