Speaking of phantom killers, welcome to an all-time classic receiving more attention than ever before. Ghosts, or at least restless spirits, have been with us throughout recorded history. Tens of thousands of accounts exist of encounters with ghosts and brushes with unhappy specters. Ghosts have an amazing track record for scaring humanity made even more amazing by the fact that

THERE IS NO SCIENTIFIC EVIDENCE

Unfortunately, a lot of people like to pretend there is overwhelming scientific evidence for ghosts. The world of psychics, fortune tellers and mediums thrives on the superstitious dopes that believe in the existence of a haunted afterlife. The honest profession of rooking people out of money during a seance has plenty of help from an entire subculture of pantomiming wimps who call themselves "ghost chasers."

Ghost chasers affect the courage of a nervous nine-year-old kid alone in a dark house. With this sort of "every creak is a demon from the pit of Hades" mindset, they wrap themselves in the trappings of a scientist or field researcher. They wear camera vests and have all manner of infrared camera, electrical detector and specialist audio equipment. Their gear is designed for actual applications, but it is used by ghost chasers as a prop to support their authority on the subject. With their glowing scanners they jump at every sound and every shadow using high tech equipment to find more and better sounds and shadows.

There are several TV shows and documentaries designed to "explore the realm of the supernatural," some of them airing on supposedly serious channels like The History Channel or The Learning Channel. The methodology is always the same. The crew films inside insane asylums or abandoned coffin factories using lowlight cameras and the hosts speak in hushed tones about "feeling cold" or "detecting a presence." Occasionally something even happens, like one of the ghost chasers will fall over or tiny scratches will suddenly "appear" on someone's arm.

The impression these shows unintentionally give is that spirits of the departed are indistinguishable from bats. They leave scratches, they swoop around and they speak gibberish only detectable by ultrasonic microphones. The key difference is that bats are scarier because most of them can cause rabies. Ghosts seem to cause little other than ridiculous overreactions of terror and the occasional moving piece of furniture.

Ghosts deserve their position on the list and I see only good things for them in the future, so long as hammy dorks that don't know how to use thermal cameras are willing to act shocked that their reflection doesn't appear in a mirror on national TV. 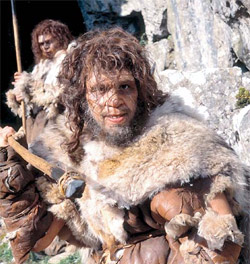 Many millions of years ago, there were two tribes of proto-humans fighting off giant beavers with crude spears and hunting dinosaurs for their pelts.

One tribe decided that all members of the tribe should fashion pants out of the dinosaur hides to conceal their tiny and grotesque genitals. They were really disgusting. They looked sort of like tiny smashed bananas. It was a lot of work, but the tribe dutifully stitched together pants.

The other tribe scoffed at the first tribe's modesty strutted around proudly with their handsome genitals wagging in the breeze for all to witness.

This prompted a war in which many spears were hurled, and though casualties were terrible on both sides, the pants of the first tribe shielded them from many wounds. The second tribe and their beautiful genitals were wiped out to the last proto-man. Their genetic line ended on that fateful day.

The first tribe, having crushed their foes, would go on to evolve and become the tiny-dicked hateful puritanical fucks that lord over the idea of "decency" in America. Ignoring their own youthful indiscretions, these fearful shits circle their wagons around their "impressionable children" and use them as an excuse to foist their morality on the rest of the country. They know no political affiliation, they are Democrats and Republicans alike, eager to censor and stifle and cover-up if it means one 11-year-old doesn't have to hear the word "shit" emerge from the cackling pacification machine they use as a baby sitter, but you know as a television.

To them obscenity is a corrupting force as real and insidious as supernatural evils and pandemic diseases. They envision children as innocent lamb-like naifs that need constant shepherding, rather than the resilient little assholes kids really are.

The obscenities that make these people apoplectic with rage can be divided into two categories: words and skin. The words are those words they have deemed, sometimes arbitrarily, as inappropriate. These words run the gamut from racial slurs to words for body parts, bodily functions and sexual acts. The skin simply means nudity. Although it includes sexual acts, these are considered so irredeemably horrific that their depiction can be criminally punishable.

Nor are these rules about words and skin simple or logical or straightforward. The confusion caused by the rules can often be as frustrating as their existence and consequences. They often differ greatly from state-to-state and from one community to another. 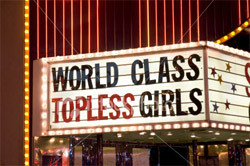 Those who intentionally or unintentionally use profanity in the United States on television or the radio have it even worse. They are subject to the same sort of laws and regional whims as pornography, but they also face brutal oversight from a number of private organizations. Most notorious among these is the Parent's Television Council.

The Parent's Television Council constantly searches the radio and television airwaves for any cause to find offense. The PTC was the source of all of the complaints sent to the FCC over the droll Janet Jackson nipple fiasco. In other cases it operates more like a vote-rigging script for an online poll, showering the FCC with automated complaints until they punish the offenders.

The freedom of expression that exists in the United States is a noble principle, but one rarely followed as long as we allow ourselves to be ruled by fear of tits and "fuck." Until then, watch HBO.