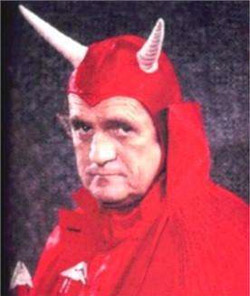 He is known by many names. The Devil, Satan, Lucifer, Old Scratch, Big Poppa Pump, the Prince of Lies, Goofus, Hammerman; call him what you will, the Devil is the personification of evil. He is one of my favorite creations of mass fear. There is something delightful and somehow quaint about the concept that mankind's misdeeds are the result of a single entity, a sort of cosmic entertainment lawyer constantly trying to snooker the unsuspecting into signing their name on the dotted line.

My favorite stories aren't the epics of the Bible or John Milton, but rather the bizarre, almost inane maneuvering in tales like Faust or the Black Rider. The Devil is not omnipotent and omniscient like his arch rival in Heaven. He's a magical guy, to be sure, but he's really just a traveling troublemaker biding his time and preparing his forces for the final showdown.

The Devil has seen various degrees of popularity as a spiritual antagonist for mankind. He probably reached his height during the middle ages, when very real problems like the plague were attributed to his evil influence. He also is frequently viewed as a sort of default state of mankind. If you fail to go to church and pray enough you will fall into the clutches of the Devil. During the dark days when fear of Satan was greatest the sin of apostasy could be punishable by death. 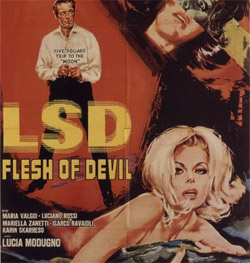 The more contemporary incarnation of Satan is still a source of great fear among Christians. Although he is unlikely to appear in person before a victim, his relentless attempts to spoil the good works of man are nonetheless constantly felt. For the truly faithful and truly fearful, the Devil weaves his web of lies using human pawns and the tools of the 21st century. Satan has great A&R skills and he knows all about the Internet.

Satan's greatest endeavor these days seems to be related to the spread of homosexuality. Sure, he still has time to indulge in the occasional human possession, but mostly he just stewards the gay agenda and attempts to recruit more godless sodomites to his burning standard. I expect after a few more decades of turning America gay Satan is going to have assembled the campest army this side of a Boy Scout Jamboree at a KOA.

The arch fiend of the abyss has seen better days, but he remains a force of fear to be reckoned with and he easily keeps a spot in the top five for the foreseeable future. 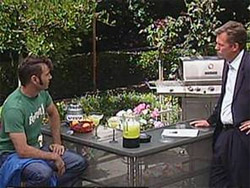 Visualize the most vile creature your imagination can conjure. Maybe this monster has ten eyes or a face made out of worms. Maybe it has the head of a snake and the body of an owl. Maybe it's just a guy with a lousy haircut and those creepy over-sized gums with tiny little baby teeth. Whatever you are picturing right now, I present to you a worse monstrosity: the pedophile.

Pedophiles are so bad that if they get convicted and sent to prison they are likely to be repeatedly attacked by rapists and murderers disgusted by the pedophile's crimes. It's hard to imagine the public overreacting to creatures as irredeemably loathsome as pedophiles, but here in the United States we like to achieve the seemingly impossible.

Enter the vigilantes at Perverted Justice. These slightly shady Internet warriors have made careers out entrapping men by posing as teenage girls. When someone approaches them on the Internet they engage in sexually explicit conversation and set up a meeting place. They then photograph the man when he arrives at the meeting place and publicize his indiscretions. Far be it for me to judge the creepy fucks at Perverted Justice, but convincing some auto mechanic from Minnesota that you are a 15 year-old-girl that likes oral sex and then humiliating them on the Internet might not be the sort of justice society needs.

Dateline NBC apparently disagrees, as they have partnered with Perverted Justice for their wildly popular To Catch a Predator series of specials. The show follows the same basic premise as Perverted Justice, entrapping men over the Internet into a rendezvous with a teenage girl at a rented house. When the sleazebag shows up, host Chris Hansen pops out from behind a curtain and starts quoting the particularly graphic portions of their chat logs. 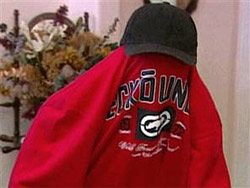 There is something ignoble about this part of the show, in which the creepo squirms while Chris Hansen recites, "I want to put my boner in your *****. I want to slurp on your ****** with my meat ***** until I ****** a ***** in your *****." Occasionally the team from Perverted Justice takes things a step further by instructing the men to do various weird things, like strip naked before entering the house or bring sex toys. Entertaining? Probably. Horrifying? Definitely.

The apparent pedophiles eventually give up on trying to explain themselves and apologize and leave the house, at which point a waiting team of police officers takes them down. It all seems like justice is served, until you realize that a number of the cases spawned from To Catch a Predator have failed to result in a conviction. Perverted-Justice are using methods not available to the police and not likely to help a case of attempted kiddie fiddling.

To Catch a Predator has also directly resulted in at least one suicide. Although it may be hard to find sympathy for someone attempting to solicit sex over the Internet from a 13 year-old boy, it's worth nothing that the man never even met the non-existent kid.

Shows like To Catch a Predator, organizations like Perverted Justices, and incidents like the case of New Jersey grandmother Marian Rubin (accused of child pornography for taking photographs of her grandkids after a bath) are all symptoms of America's unhealthy obsession with pedophilia. It turns out that it is possible to be too afraid of the worst humanity has to offer.