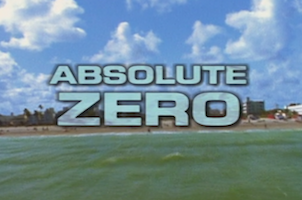 Overview: When the Earth's magnetic poles suddenly reverse, all the cold parts of the world become tropical, and all the warm parts freeze down to absolute zero. Yes, that's right, -460 degrees. You might think that's the most retarded excuse for a disaster movie premise you've ever heard, but you must be mistaken, because Science Is Never Wrong.

The Case For: Makes 2012 look like a particularly deep and thoughtful Carl Sagan lecture. If you don't think that belongs in the case for, you'd better check your facts, buddy, because we asked Science and Science Is Never Wrong.

The Case Against: Does not end with a big science summit involving a bunch of bigwigs sitting around a really big table saying "...my God" over and over while repeatedly taking their reading glasses off. That sort of ending tested very well with focus groups, and Science Is Never Wrong.

Some uneducated hacks out there might try to tell you that Absolute Zero is "utter bald-faced horseshit" or that it makes The Core "look like a fucking documentary narrated by Stephen Hawking". They might even go so far as to describe it as having exactly the same plot as The Day After Tomorrow, except with even faker Science, and in this one New York becomes a tropical paradise and all the poor people freeze to death because they're stupid. Well, those naysayers are just plain wrong, because Absolute Zero is jam-packed with 100% pure, totally reliable Science, and if there's one thing you can count on in this life, it's that Science Is Never Wrong.

What's that? You want us to lay down some stone-cold Science for you? Well, you've come to the right movie review. This isn't one of those namby-pamby movies that ends with some stupid goofball shit like killing Satan or accidentally traveling 400 million years into the past or blowing up the entire universe. Every single detail in Absolute Zero has passed rigorous scientific checks, and Science Is Never Wrong. For example, did you know that some random C- college students can predict the imminent global ice age apocalypse just by looking at some dried paint using Baby's First Microscope? That's some real A+ top-notch Science, and it's also the gospel truth, because Science Is Never Wrong.

Of course, the real heroes of Science (which by the way Is Never Wrong) are the scientists, and as the greatest Science movie ever made, Absolute Zero is just wall-to-wall master scientists in real and serious disciplines, not like those other movie scientists who study stupid fake kinds of science like "astropsychology" or "civil anthropology" or "sociology". No, real scientists are like Indiana Jones but way cooler, spending all their time having barbecues in the Antarctic snow or building an indoor jungle full of magnets for no reason. It's all bonafide Science, and as we all know, Science Is Never Wrong. In fact, that magnet jungle is so goddamn scientific that it might just be worth a slow clap of appreciation.