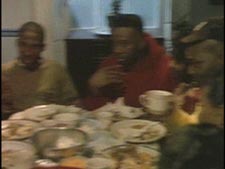 As you can see, "Ax 'Em" makes full use of the visual capabilities of the DVD medium.

The gang gathers at a random stone wall in the middle of the woods, where they have a fire going. A rap song covers all other audio, making the scene completely useless. It's really pretty amazing, considering the movie is only an hour and fifteen minutes long, just how many totally pointless scenes there are. We fade out to some black and white footage of four kids standing in a field, talking. There is no music, but unfortunately the kids are more than four feet from the camera, so they might as well be mimes for all that can be heard. We cut to a man with a shotgun who walks into a woman's bedroom. He fires, then a moment later some blood sprays in the entirely wrong direction. The man shoots a kid in another bed, and again, the blood comes out too late and in the wrong direction. Then the man sticks the gun in his mouth. That time the blood just comes out too late. As far as directions go, it's hard to screw up where the blood is going to go when someone sticks a shotgun in their mouth.

A couple cops survey the dead bodies. Outside, the kids gather at the same stonewall that the current-day gang are sitting around. One of them holds up what looks like a child who's been shot. The kid with the dead body are somehow gone when the camera scans back to them a moment later. I don't know if that;s intentional or not, but if I had to guess, I'd say probably not. If you remember the laughable text intro and combine it with the black and white footage, this must be a retelling of old man Mason killing his family! Wow, it's like history has come to life for no reason! I honestly don't know why we're seeing this. It doesn't add a single thing to the audience's understanding of the plot, such as it is. 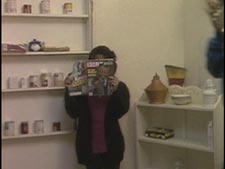 The film goes back to color as we see one of the girls standing in the kitchen, reading a magazine. Malcolm X approaches her and tries to get it on, but to no avail. Distraught by his failure, he goes off and makes a phone call to somebody. Once again, we fade to black. This time, we come up on a car driving down the road in daylight. The car comes to a sudden stop, which is chalked up to running out of gas. I guess some cars run out of gas a bit more abruptly than others. The three travelers - a black guy, a white guy, and an annoying white girl who we'll call Blacky, Whitey, and Annoying White Girl - pile out of the car and bitch at one another. Despite only being on screen for about two seconds, it is quite possible to hate them. They're just that annoying. Thankfully, we cut away from them for the time being and instead get to see one of the girls making out with Malcolm X in a bathtub. What do you know? Things are starting to go his way after all!

The next morning, the ten friends gather for breakfast - which, as far as I can tell, is chicken again - as well as to discuss who they slept with the night before, and of course, to hoot and holler. After everyone has had enough of this, we go back to Blacky, Whitey, and Annoying White Girl. We left them in daylight and return to them in daylight, but a night has passed for all the main characters. So either they've been standing around their car for the last eighteen hours, this movie was edited together sloppily, or Mfume just never gave a shit about little things like the rules of time and space. Given what is still to come in this shitfest, I'm leaning toward the third option myself, although not without a healthy dose of the second.

Whitey and Blacky go off in search of a house so they can make a phone call. They find a huge house that we've never seen before. hey let themselves in. Inside it's either randomly foggy or the camera really needs to be cleaned. Whitey hears a noise upstairs and goes to see if someone's home. Blacky, being the true friend that he is, turns on his heels and runs for it. After chanting "Hello-o" about fifty times, the Flannel Killer smacks Whitey with the phone, killing him. Blacky runs back to the car, muttering about how no one will catch his "black ass," and tells Annoying White Girl that they have to get out of there. Of course, he never saw Whitey get killed. In fact, all he saw was Whitey go upstairs. If one of my friends abandoned me every time I went up some stairs, I'd be a lonely, lonely man. What can I say? I like stairs. Annoying White Girl may be annoying, but she has principles. She stays with the car, while Blacky runs down the road like an idiot in the direction that they originally came from.

Back at the party house, one of the guys goes to the bathroom to pee. He sees Blacky stumbling around the porch through the window. That kills my only theory about who Blacky, Whitey, and Annoying White Girl really are. I thought that maybe Malcolm X called them and told them to come to the house for the party, but we clearly saw Blacky run in the opposite direction from where they had been originally traveling. And yet, he ended up at the house. Thus, they could not possibly have been going toward the house, unless of course Michael Mfume's an idiot. In any case, it doesn't matter, because after Pee Boy tells everyone else that Blacky is out on the porch, we never hear from him again. It's a good thing that subplot never amounted to anything. I was starting to get overwhelmed! 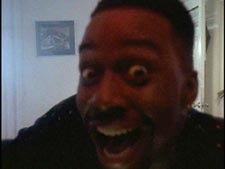 Feel the terror! Experience the horror! Witness this guy fail to keep a straight face!

Malcolm X and a girl walk through the woods by the stone wall. The fire, which was supposedly lit the night before, is still smoldering. Either the gang lit a fire that could have burned down the entire forest or this scene was shot about five minutes after the other one. Take your pick. Malcolm and his lady friend have a bit of the sex, then we fade to dinner. Surprise surprise, they're having chicken. A scream from outside draws them all away. Well, all but one guy. He's playing Gameboy. No one can resist the two-tone glory of Gameboy. No one! Malcolm X and his woman rush inside. Malcolm's hand is bleeding. Everyone starts screaming over one another, so it's impossible to hear what actually happened to him, but the viewer is safe to assume that it has something to do with the Flannel Killer. It's fairly unlikely that another dangerous element is going to be added into this complex story. The front door slips open and Whitey's body falls inside. Everyone screams some more and runs outside. There, they see the Flannel Killer doing some sort of maintenance work under the hood of one of the cars. Sure, there are ten of them and one of him, and all he's doing is tinkering with a car, but nonetheless everyone screams even more and runs back inside, making sure to look directly into the camera as they keep screaming. 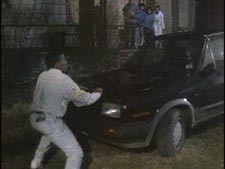 Yeah, you keep on shaking your groove thang, there. That's really helping. Moron.

One of the guys gets up the nerve to go back outside. There, he tries to ward off Flannel Killer by dancing around like an idiot. In fact, basically all that guy does for the rest of the movie is dance around like an idiot. Thus, he shall hereafter be referred to as Dancey Guy. Flannel Killer waves a machete at him, and he dashes back inside. The gang comes up with the brilliant idea of running into the woods. While they debate the merits of this plan, the Flannel Killer comes in through the front door, taking them all by surprise. I don't know what convinced them that they'd be safe on the other side of an unlocked door. If the killer is smart enough to spend time working under the hood of their car, I think he's got the mental capacity to figure out how to get through a door. Since this situation has no simple resolution without a lot of bloodshed and expensive makeup effects, we just fade to black.

We come up on the gang now out in the woods. They cleverly decide to split up into small groups. Malcolm X, the only one with an injury, is left all alone. As he bemoans his fate, the Flannel Killer comes up from behind and raises a bat. Malcolm screams and wobbles his glasses up and down faggily. That's right, faggily. There's just no other word for it. The next shot is Malcolm on the ground, presumably having been hit with the bat. The Flannel Killer drops the bat and grabs the random pistol that just happens to by laying on the ground near Malcolm's feet. I swear all of this actually happens. I know, I wouldn't believe it either.