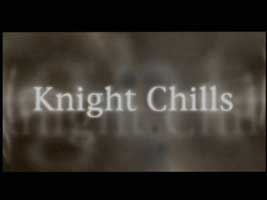 Overview: A stupid nerd whom nobody likes because he's a stupid nerd decides it would be a good idea to drive into a tree, then return from the dead as a black knight and kill everyone in his roleplaying club for some reason. So he does.

The Case Against: The film features the single worst child actor since the little pink baby from Dinosaurs; there's really only enough plot for about twenty minutes, but the movie goes on for an hour and a half.

It's a little known fact that I absolutely hate puns. I can't stand them, even when I use them. Especially when I use them. The title of this movie is a pun. That doesn't bode well for the rest of it. Sad to say, that one crappy-ass pun is several times more clever than anything in the actual script. The only possible excuse for the existence of this movie is that a bunch of people were sitting around, lighting themselves on fire and seeing if it would hurt every time, when someone said, "Hey, you know what would be a good idea? Let's remake 'Skullduggery,' but let's get rid of the ancient curse plot device and let's make every character completely unlikable!" Everyone must have agreed that this was a sound plan, most likely due to severe mental retardation, because "Knight Chills" exists, and lo and behold, it is "Skullduggery," minus the ancient curse plot device and without a single even remotely likable character. The best thing this movie has going for it is that the little boy who plays Jack Jr. is so horribly annoying that all of the other actors seem better by comparison. Well, that and it's not directed by the Polonia brothers.

The impetus for "Knight Chills" is the small controversy that popped up a few years back when some ultra-religious nutballs came to the brilliant conclusion that Dungeons & Dragons is somehow linked with Satan worshipping. The thing is, one a controversy scale one one to ten, with one being a minor difference of opinion between two friends and ten being the Israeli/Palestinian conflict, this doesn't even register. It's not worth making a movie about. Besides, "Knight Chills" came out in 2002, well after those accusations died down. Somehow, I don't think that a few fanatics who wouldn't play the game anyway denouncing a roleplaying game as evil really counts as a crucial part of American history that just needed to be captured on film. A historical epic? No. A pathetic excuse for a movie? That's a big ten-four, good buddy.

This is John. Luckily, he won't be around much longer.

The fun begins with John, a nerd in his early twenties played by a nerd in his late twenties, shuffling through some photographs, drawings, and notebooks and getting ready for a night of roleplaying. He goes downstairs and tells his mother he's going to the library, to which she responds by nagging him about his dying uncle Sal. Personally, I don't see the connection, but it's okay, as it will never have any bearing on anything else in the movie. John drives to Jack and Laura's house, where he immediately gets pegged in the head with a snowball, courtesy of Hanee, one of the other players. It's not even remotely important to tell all the different players apart, but since they're almost all of the characters in this thing, we might as well get to know them a little better.

I hate this kid. I hate his face, I hate his stupid hat, and I hate those damn pajamas that he wears for the entire movie.I should also introduce Jack's son, who's name, conveniently enough, is Jackson, A.K.A. Jack Junior. This horrible little ball of dough is the son of Jeffrey and Juanita Kennedy, two of the writers. If you've ever wondered where baby fat goes when people grow up and lose it, the answer is it fixes itself firmly to this kid's lard-laden face. Jackson is actually his real name, and I assume that it's only his character's name because the kid is too stupid to remember anything else. He's certainly too stupid to handle even the most rudimentary speech. Everything that he says is completely unintelligible. He manages to make sounds that no combination of English letters can quite duplicate, but I'll do my best. For instance, when John enters the house, Jackson waddles towards him and spurts out:

Jackson: "Ego tapeoff uh coe pow!" (Possible translation: I have no earthly idea. My best guess is "You can take off your coat now," but that hardly seems like a necessary line of dialogue. Then again, whatever.)

I hate this kid. A lot. He makes my life worse. Anyway, John goes on down to the basement, chanting knightly lore aloud. Zac, the stoner who apparently couldn't decide whether he wanted to end his name with a "C" or a "K" so he said "fuck it," mocks John for being such a colossal dork, and rightly so. After John tells everyone that he lied to his mother about where he went, there is a brief discussion about how some people thing that people who play roleplaying games are involved in devil worship. That more or less the last we'll here of that, though. John takes a moment to make a poor attempt at flirting with Brooke, and then it's time for some super hardcore gaming action! WOOOOOOOOOOOHOOO! From the suspense of slow-motion dice rolling to the incredibly cliched metaphors of Jack's Lore-Lording, this is one exhilarating waste of ten minutes of my life. I will give credit where credit is due, though. Throughout the gaming, there are soft sound effects that relate to the action that is occurring in-game, which shows some attention to detail. Kudos to you, "Knight Chills." Too bad the scene still sucks. During the gaming, Hanee's character tries to knock John's character off a cliff, prompting John to have his character respond in kind, which in turn prompts Hanee to punch John in the face. Well, at least they say that Hanee punched John in the face. We see him reach toward John, but the actual strike is suspiciously absent. Laura sends Hanee home with Russell and the game breaks up.