If you look up "Feast" on IMDB, you might notice that there are only two user comments and that both of them are fairly positive. Let me tell you right now - that is only because the people who wrote them are idiots. Now, I'll admit right off the bat that this movie is not quite as bad as some of the ones I've had to watch lately, but not being quite as bad as "Bad Magic" is like not being quite as evil as Hitler. It still doesn't amount to much. "Feast" starts off fairly promising, actually. Likable, if illiterate actors, halfway decent shot composition, no Polonias in sight. It's in the second half, though, that the movie takes a sharp turn from gently irritating to brain-burstingly pathetic. The script is a collaboration by James Holiday and Charles Rojas, but the two of them together couldn't manage to come up with an hour and a half of rational action. The last half hour or so makes absolutely no sense and leads up to an ending that fails to resolve a damn thing. It doesn't help that the audio was apparently captured by shoving microphones up the actors' asses. Want to learn how to stretch eighty-eight minutes of softcore porn and fake blood into a night of endless boredom? Then by all means, read on. 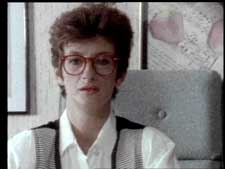 The first sign of trouble ahead is during the opening credits when we learn that this is a Dead Alive production. "Mr. Ice Cream Man" was also a Dead Alive production, if you get my drift. And if you don't get my drift, I'm trying to say that this movie already sucks. We see a girl running through a forest in slow motion as Peter, a genial black stereotype narrates his nightly dream of killing and eating her. Well, "narrates" might be a strong word. Peter doesn't really have what one might call a strong grasp of the English language. He drops entire syllables from the middle of his words. It seems like he's just seeing the script for the first time, which may very well be true.

His psychiatrist, Brenda Whitlock, tells him that his dreams are the most unusual she's ever heard. Her clients must be the most boring people on Earth. Brenda is played by the repulsive porn star Sharon Mitchell. Miss Mitchell must have had a difficult time adjusting to the world of legitimate acting, as this is one of the few scenes where she actually has clothes on. Believe me, that means it's one of the better scenes. Brenda insults Peter's problems for a while, then tells him to make an appointment with her secretary. "What a weirdo," Brenda remarks once Peter is gone, by which I mean when he's barely off camera and still definitely within earshot. If you don't think she's a horrible psychiatrist already, don't worry, it will become evident time and time again before this mess finally comes to an end. 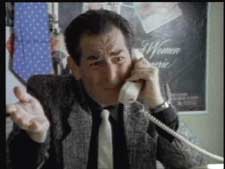 Of course he's a movie producer! He's got a movie poster on the wall! And look at that tie!

At his law office (we know it's a law office because there are books on the wall), Peter makes a phone call to Leroy Washington, the head of the classily named Climax Pictures. The call is intercepted by Misty, the horribly stereotypical ditzy secretary. Total number of characters introduced so far: 3. Total number of dimensions between them: 1.5. Misty wastes Peter's time with questions about Sylvester Stallone and... hell, I don't know. The minute she opens her mouth, I stop paying attention. Finally, she patches him through to Leroy. In his first line of dialogue, Leroy makes two incredibly racist comments at Peter's expense, then demands that he not be treated unfairly just because he's white. That's about as charismatic as he gets. He tells Peter that he's holding a cold reading at a sound stage that night and convinces him to come. After Leroy hangs up, a pasty land-whale of a human being comes in to read for an audition. The fat, fat man speaks in an obvious falsetto voice. Get it? The big guy has a squeaky voice! Hooray! That's about as good as a humor gets in this script, folks. As if the scene wasn't bad enough, Leroy has him read the same lines a half dozen times. Each reading gets progressively worse, then Leroy rubs his hands all over the guy's upper thigh. Yep, nothing makes for award-winning cinema like having to watch an ugly man jiggling an even uglier man's leg fat, that's for sure. 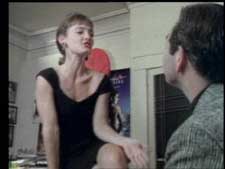 Maybe it's me, but her arm just doesn't look right.

Outside the studio - or rather, in Undisclosed Outdoor Location A - Misty coaches her friend Tawny for her upcoming audition with Leroy. It's hard to believe that Tawny's going to have much luck with an audition when she can't even get through this miniscule scene without reading the script over Misty's shoulder. Tawny does manage to impress Leroy, however. In fact, she doesn't even have to act for him, show him a resume, or even tell him her name! What talent! Leroy tells her to show up for the cold reading with Peter that night. At the cold reading, Tawny does fine because she is allowed to have the script right in front of her. Peter struggles, however, because the scene requires reading. Ironically enough, the script actually calls for him to have trouble reading a word. That word is "goodbye." Peter is supposed to be a successful attorney, and he can't read a common two-syllable word. Let that be a message to all you nay-sayers: say nay more often! This movie blows! Peter finishes off the scene by shooting Tawny point-blank in the chest. It takes her far too long to fall the whole eight inches back into her chair, but hey, that's acting for you. Leroy rushes up onstage, shouting about how excited he is, then tastes a drop of Tawny's blood. The whole movie sounds like it was recorded on a Fisher-Price toy, but there is enough horrendous clipping in this one scene alone to drive an entire audience out of the theater. Oh, who am I kidding? Everything about this movie is enough to drive an entire audience out of the theater. 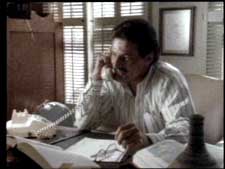 "Hello, Pizza Hut? Do you have any openings? Somehow, I don't think my acting career is about to take off."

Brenda listens to a tape of Peter's dream. The moment it ends, she springs into action, calling Gary Brown, a Princeton anthropologist. She is quite surprised to actually find Gary in his office. Being the suave ladies' man that he is, Gary asks Brenda on a date for that evening, and they both hang up. Wait - I have to be missing something, here. Brenda made the call, fully expecting to have to leave a message on Gary's machine. Gary asked her out, and they both went their separate ways. So Brenda basically called to get asked out. Jesus, for someone with the face of an ostrich, you'd think she'd be a little less ambitious.

We cut to the police station, or rather a sloppy room with a table, which is bad moviese for police station. There, a woman in a red blazer and a grizzled older man in a leather jacket and sunglasses, which is bad moviese for police officers, discuss a three year old murder case. There is plenty of bad acting in "Feast," but Mike Tristano managed to put his two worst actors together in the same scene. They constantly drop half of their lines, then spit them out later in the scene. From time to time, they actually cue each other. You can see the strain of remembering entire sentences at a time etched on their faces. I think that they're trying to say that they really have no leads in the case and they need Gary's help, but that's just what I can patch together from their mumblings.