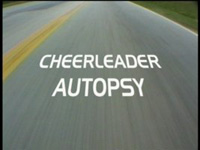 The Case For / Against: I decided to sum up my feelings about "Zombie Cheerleaders" in a short Ogden Nash-esque poem:

I laughed,
I cried,
I died,
inside. 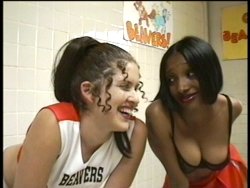 The "Beavers" huh? I'd like to "dam their river"! Also, I would not be particularly opposed to having sex with them.I think I must be going crazy. This alone isn't a particular shocker: for years I've been waiting until I can be one of the cool kids and take daily doses of lithium or magnesium or potassium perchlorate or whatever substance doctors would prescribe in order to return me to my ground state of melancholic acquiescence. I just never figured that the process would assume such a cruel form. I always figured that the first sign would be something relatively normal, like becoming utterly convinced that the lady at the checkout register at the local register was constantly snickering at me behind my back, instead of just pointing and laughing in my face like she normally does. Or maybe contract some OCD, which I could actually use, since my room is a bit of a sty right now. But to actually sort of appreciate a movie that I can quantifiably diagnose as being terrible? Jesus. If there's a God in heaven, this is a real low blow, man. Couldn't you just make my leprous limbs rot off?

Don't get me wrong, I am never planning to watch "Cheerleader Autopsy" again in my entire life, but sitting through it was, until a pivotal scene near the end, more an exercise in passive quasi-amusement than the standard Josef Mengele spectacle of gibbering and quiet pleading for lighting to arc through my television's cathode ray tube into my brain. The most immediate and obvious explanation for my reaction to this piece of shit movie is incurable insanity. The movie's benevolently short running time of 75 minutes might also have something to do with it. However, that's hardly a reliable indicator, since the theory of relativity, first posited by LL Cool J in "Deep Blue Sea," tells us that "Cheerleader Autopsy's" runtime really ought to feel as drawn out as, oh, I don't know, some sort of hilarious taffy, like salt water taffy where the salt water has secretly been replaced with pee. 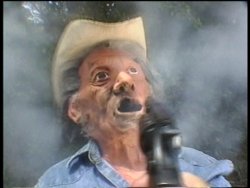 Why? Why do the paper maché ones always die young?Another explanation might be because "Cheerleader Autopsy" is, unlike some recent movies the giant space slugs living in my attic have commanded me to review, actually not particularly unlike what the title suggests. When I rented "Bad Bizness" I was expecting a little more adhesion to the ideas presented by the film's name than the words "bad" and "business" simply being used within the script of the film. When I opened "Cheerleader Autopsy," on the other hand, I proclaimed to myself that, so help me as the sky is mottled sepia, this movie better have some dead cheerleaders having their earthly remains autopsied the fuck out of them. After a muttered prayer to Xenu and checking my leprechaun traps I settled down for what I hoped would be a nice session of organ weighing and coroner recommendations. Turns out I was in for some organ weighing, just not quite in the manner I had envisioned.

The movie opens with an old broken down school bus pulling up to the curb and the foul, crusty bus driver angrily leaning on the horn in a Crankshaft-like display of impatience. Meanwhile a gym coach departs the bus, dressed in an eighties-vintage wifebeater and short gym shorts, something far removed from the clown-like tents of fabric, protecting the tender modesty of a man's upper calves, which pass for the average pair of gym shorts in this day and age. The gym coach poses in front of the bus for a moment before getting fed up with the bus driver's incessant honking and throwing his baseball cap at the bus driver, who retorts with a long stream of Micro-Machines-Man caliber speed cussing, capped off with what becomes his repeated catchphrase, "asscrack." The gym coach furrows his brow. "What?" he asks, unfamiliar with filthy bus driver cant. The bus driver catches his breath. "Isaid, ifwedunnatakendokalekalamasilicovolcanoconiosis, asscrack," he repeats, once again putting special care and emphasis on the final word, hopefully driving his catchphrase further into the solid bedrock of the viewer's mind. Then for good measure he sits on the cap and noisily farts on it for a few minutes, presumably to prove some kind of point. Farting on baseball caps might be the bus driver equivalent of "Q.E.D.", I don't know.