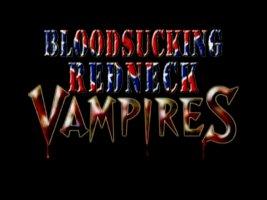 Overview: "Bloodsucking Redneck Vampires" could singlehandedly set back public perception of the South by twenty years, so it's a lucky thing that no one will ever see it. Of course, there are other more prosaic reasons why people are lucky that they will never see this film, but all in due time.

The Case For: It's actually kind of funny at times, although maybe the jokes just seem funny in comparison to the miserable, disgusting human condition that pervades the rest of the movie.

The Case Against: Page four of this review. 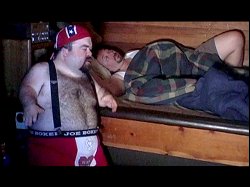 Joe Boxer's latest ad campaign didn't do as well as they were hoping.When I applied for this writing gig I thought it would be "fun," in the same way that a fat man thinks running a 10K race might be "fun." Unfortunately, I didn't realize that I would be watching almost nothing but horror movies. "Rich," I said to Lowtax during one of our weekly phone sex marathons, "I don't even particularly like horror movies." He assured me that everything would be fine and that the galaxy of shitty movies was resplendent with a constellation of examples in every conceivable genre. What he neglected to mention was that almost all of these consisted of Pakistani technical training videos or low budget documentaries about the life and death of Tupac Shakur. "Bloodsucking Redneck Vampires" is not the worst horror film I have been forced to watch thus far, but this is about as much of a consolation as being told that my newly contracted thyroid cancer isn't a concern because I'll be dead of ebola within a week. If anyone can suggest some non-horror films worthy of my attention I'd kindly ask you to email me with information, because I am nearly at wit's end. Also, send some money.

The name "Bloodsucking Redneck Vampires" immediately bodes poorly for the work. The Racial Character Class of "vampire" can encompass many different abilities, some more strictly adhered to than others. I can count the number of times I've seen a vampire turn into mist or even a bat on one hand, and I've suffered numerous farm accidents. Some traits, like weakness to sunlight or wooden stakes through the heart, are usually included. But there is only one hard and fast rule that is invariably followed in any movie involving vampires: they suck blood. If someone screams "oh shit watch out for the vampire," the innate reaction is to protect one's neck from any dude with preternaturally pointy teeth. "Redneck Vampires" would have sufficed for this movie's title, and even "Bloodsucking Rednecks" could be considered adequately descriptive in a pinch. But by extending the title to "Bloodsucking Redneck Vampires," the film's makers are doing nothing more than prolong my embarrassment when my roommate wanders through the room and asks what the fuck I am watching. Of course, the simple act of watching this movie inherently robs me of any dignity I may have once possessed, but I would prefer to keep the illusion intact.

One positive aspect of this movie is that it is by far the scariest low budget horror film I have ever seen. This has nothing to do with the "bloodsucking vampire" aspect of the film and everything to do with the "redneck" part. "Bloodsucking Redneck Vampires" would be the perfect film to show at a recruitment meeting for, say, the Black Panthers, or Al Qaeda, or maybe MEChA. There's not a single non-white person in the entire film, so there's no dilution of the unmitigated hatred to be felt against every single character, from slovenly drunken idiot to slutty daughter to obese rural mother to effete metropolitan fop. This movie is to vampire flicks what "Deliverance" was to buddy travel movies, and the idea that people might actually live the way portrayed in this movie makes me root for the vampires. 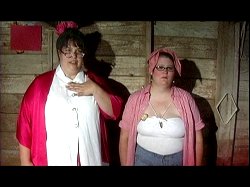 Fat and fatter.The movie opens at some sort of house party where a chubby vampirella sips on a snifter of what I assume to be blood. Meanwhile, a girl is tied up in the upstairs bedroom and is sensually teased by another girl. The non-tied-up girl soon bares her fangs and sinks them into the neck of the first, who moans in pleasure. Unfortunately, before the nudity can progress beyond the briefest inclusion of boobs, both are staked by a mysterious figure lurking in the darkness. The vampirella's idiot man-servant hears the screams from upstairs and warns her liege that they must leave immediately. The vampirella rolls her eyes and spits out some hackneyed dialogue she practiced by watching old tapes of Count Chocula ads, chiding her manservant for being a moron (in what proves to be a running theme throughout the film) before the two finally head out on foot. "Perhaps we could find a car or some other mode of transport," pipes up the manservant. At first I thought he was being ironically clever in his stilted language, but eventually I figured out he was just stupid.

The pair stumble through the dark, Vampirella attempting to appear regal as she leads the way, while her manservant drags a hundred pound suitcase. Soon they stumble upon a dirt road and the manservant hides as Vampirella assumes a quasi-inviting pose that she saw once in a movie. Luckily backwoods folk are not particularly discriminating as the first hillbilly to drive by slams on his brakes and begins salivating. "Holy sheep dip!" he shouts in delight. To be fair, it is a dark deserted road, so maybe he mistook her chubby pallid grimace for a sexy-pouty ice queen demeanor. Attempting to make conversation, the excitable hillbilly rambles on and on about the squalid minutiae of his existence, and Vampirella, her patience exhausted, finally gives up and just beats him up and throws him out of the truck. I guess she snuck a bite in there somewhere too since he turns into a vampire later on. Oops! Guess I should have spoilered that bit, no point in watching the movie now. Sorry.