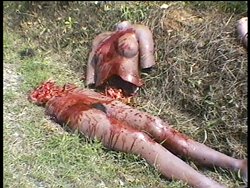 Warning: the preceding image was extremely fake and should not have been viewed by small children.Getting back to the story, the gym teacher checks his watch and frets and pouts, because his squad of cheerleaders are late for the bus. The scene shifts to the locker room, where the cheerleading squad, which consists of five girls with a combined age of at least 112, prance around giggling in their underwear for a while. Finally one of them realizes they were supposed to be changing clothes for a reason. "Remember last time we were late for the bus?" she recounts. "We all got paddled, hard." She giggles some more as she recounts the memory, because all cheerleaders are kinky like, I don't know, something hilariously full of kinks, like dreadlocks soaked in pee.

Sure enough, after the girls finally file out to the bus, the coach paddles them one by one as the bus driver leans out the window and leers at the high school girls being sexually degraded, once again just like Crankshaft. After the corporal punishment is complete the bus takes off and makes a pit stop at some sort of pep rally for the cheer team, who are ignominiously named the "Stickwater High School Beavers". Naturally the crowd is holding signs like "You Can't Lick Our Beavers" and "We Love Beavers" and "I Like To Have Sex With Young Tight Beavers" and other equivalent slogans which break the shackles confining ordinary use of innuendo. After a brief pep rally with the fifteen or so members of the crowd hooting and hollering, the cheer squad reboards the bus and they clatter on down the road to the cheer championships.

The movie then cuts to a frat house with the title "HARVERD MEDICAL SCHOOL" overlaid, where a frat boy is lying in bed cuddling with a naked female mannequin. In the midst of his reverie, his roommate bursts in with a sheet of paper, explaining that the two of them have been kicked out of Harverd, for among other things, "misuse of resources at the cadaver lab." So I guess the frat boy was actually cuddling with a corpse instead of a mannequin, which I suppose is worse, although it was an actual human female at one point. The second frat boy, Blake, seems not to really mind being kicked out for his roommate's necrophilia, and decided to go stay with his uncle Clyde and work at his mortuary. Maybe his roommate has given him a few ideas, I don't know. 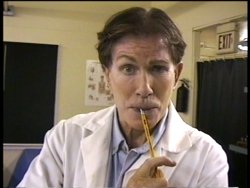 Would you want this man operating on you? Too bad, since you'll be dead.Back on the bus trip, the cheerleaders sit around talking about wind and engine noises for a few minutes. Well, it's possible that they were talking about something completely different, but the cinéma vérité school the director was obviously hoping to emulate forbade him from recording pickup dialogue so instead I will just imagine that the cheerleaders were all saying something really deep and profound, like how many pints of semen they had pumped from their stomach in a single evening. Meanwhile the coach keeps pestering the bus driver to get the hunk of junk moving faster if they want to make it to the cheer competition on time, and the driver responds with streams of unintelligibles occasionally punctuated with "asscrack." Soon the coach gets fed up and jerks the gearshift into overdrive, sending the bus careering down the road. "Holy shit," the bus driver intones, then after a second's pause, he shouts "asscrack" a few times for good measure.

Soon the bus starts making funny noises, or at least different funny noises than usual, and the bus driver brings it to a halt on a gravelly back road. "Supercalifragilihominahomina asscrack," he curses, which roughly translates to "the bus has broken down and now I must attempt to fix it." The coach orders the girls out of the bus to do some exercises while he attempts to help bang on the engine. Broken down vehicle, backwater road, the scene is set for horror!

Instead, a nearby hick in a lawn chair starts taking pot shots at a bottle set up on a fence. As the coach is attempting to decipher the bus driver's expert engine analysis, which is composed of "asscrack" repeated in different levels of pitch and timbre, a stray round suddenly pierces the engine block! The engine explodes in a fireball! Well, I assume it does, since all that happens is there's a flash of light and two props made up like charred corpses suddenly fall to the ground. Then the bus slowly starts rolling backwards down the slightly inclined road, and the cheerleaders, whose only experience with running away from rolling objects was gleaned from the opening scene of Raiders of the Lost Ark, attempt to run away from the out of control bus by running directly down the center of the dirt road, instead of moving six or seven feet to either side. Naturally, they are horribly crushed, although the movie doesn't have the budget to show that either and instead cuts to the drunken hick curiously peering into the barrel of his own gun, ending with him managing to fire a shot into his own head and dislodge the four pounds of raspberry Jell-O that was apparently lodged there.