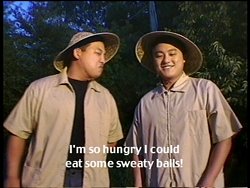 Well... it might be a Vietnamese expression, I guess...Once again the movie cuts back to the frat boy Blake, who has arrived in the town where his crazy old uncle lives. After picking Blake up at the local elementary school playground for some reason, probably to fulfill the insatiable urge of every shitty director to film a scene at his old public school to show an old teacher just what a raging success story he is, Uncle Clyde takes Blake back to the mortuary, which happens to look just like a normal house with a sign placed out front. Maybe that's how they do things down in Georgia, I don't know. Inside, Uncle Clyde shows him around, including his four corpse gurneys, his nicely framed photo of a horribly dismembered corpse, and another photo of a supine girl that Uncle Clyde explains was a mangled cadaver that he sewed back up into a state of beauty. Blake, suddenly disturbed at the idea of necrophilia for some reason, appears perturbed. "You didn't, you know..." he asks in possibly the only delicate moment of the entire movie. Uncle Clyde is unrepentant, however: "Remember the first rule of the mortuary business: if they don't say no, then consider that a yes." A similar rule is often employed in other areas, like telemarketing or Best Buy service plans. Blake's momentary discomfort over sex with corpses soon passes, however, as does any repulsion he feels towards Uncle Clyde's other pasttime, namely, selling corpses to the local dog food factory. "What if the pigs catch you?" Blake asks, using the standard terminology for the region. Uncle Blake, however, produces a badge, revealing that he is not only the local coroner but the local sheriff. Oddly enough this doesn't help get any paperwork signed faster.

Back at the school bus, a driver stops his car and notices pieces of cheerleader corpses strewn around, apparently flung from the heinous collision with a bus moving three miles an hour. He calls 911, and soon Uncle Clyde and Blake are at the scene, whistling at the large selection of body parts which happen to look exactly like bits of mannequins. The man who called 911 is busy performing CPR on one of the more intact corpses, and rather than telling him to scram, Uncle Clyde grabs a tire iron out of the trunk of his car and bashes the man's skull in. Blake, who has gotten over all semblance of human feeling, merely chuckles a little at the gruesome murder. "More money from the dog food factory," Uncle Clyde explains, although I don't think anyone was particularly wondering what the big deal was. 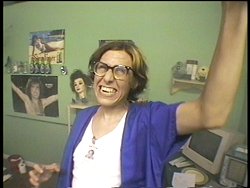 He may not look like much, but he's got it where it counts. By "it" I mean his penis. And by "his penis" I mean someone else's penis.Back at the mortuary, Uncle Clyde takes a nap on a gurney and Blake tries to wake him by stabbing a scalpel into the sole of his foot. After Uncle Clyde gets up and accidentally stomps on some broken glass, he explains that he hasn't had any feeling in his legs since his balls got cut off by Charlie in 'Nam. "Don't worry, though," he says. "A couple sips from my patented black beer and I'll be good as new tomorrow." Turns out Uncle Clyde happens to have the formula for a certain recipe of beer which can magically heal any injury. Blake seems to take this incredible medical breakthrough in stride, which isn't surprising considering his complete lack of emotion regarding necrophilia and homicide. The thought that such a discovery would be worth trillions of dollars does not appear to enter either of their heads, sadly allowing the movie to continue.

After the two sociopaths get through examining and tagging the batch of cheerleader corpses, which included pulling some babies out of their wombs and throwing them in the trash, they take off for home and allow the night janitor, Norbert, to perform his rounds. Norbert, who weighs about 98 pounds not including his enormously hornrimmed emo glasses and who lives in a squalid room attached via a crawlspace to the mortuary, emerges from the shadows and starts going about cleaning in his surly, emotionally crippled way, occasionally broken up by brief periods of crying hysterically about his failed life and how he dropped his science fair project at the age of nine. As he prepares to shove the charred cadaver of the gym teacher into the incinerator, he notices that somehow the coach's gym shorts shielded his nether regions from the intense heat like a nylon derivative of asbestos, leaving his large, suspiciously rubbery penis intact. Norbert, whose emotional problems all naturally stem from having a small penis, suddenly has a burst of inspiration and begins cackling hideously. He removes the essential organ from the dead man, who no longer really needs it, then grabs a giant meat cleaver and chops his own dick off.

Normally when I add a paragraph break right after something completely bizarre it means that I am going to add some sort of modifier or disclaimer, announcing that things aren't really as awful as I made them out to be. In this case, however, the direct approach is not only the best but the most accurate, as "Cheerleader Autopsy" quite clearly and graphically shows a man chopping his own dick off, complete with blood-spurting stump and a lot of blood-curdling screaming. I don't really know what else there is to add. If seeing a guy graphically sever his own penis is not something you had listed on your list of lifetime goals, then you might want to avoid this movie, so just a heads up. You might want to avoid the following scene, where he then takes a needle and thread and upgrades himself to a deluxe model, finishing off the procedure with some swigs of the magic healing beer.

After watching someone detach and replace their own penis there isn't really a whole lot I can say to raise the rest of the film to an appropriate climax. Uncle Clyde and Blake end up fighting over money, with Uncle Clyde being killed and thrown in the crematorium. One of the dismembered cheerleader corpses ends up not to be quite dead, and after Blake bandages up her wounds and has sex with the "Boxing Helena"-esque torso, she comes around and makes fun of his sexual prowess, causing him to beat her head in with a bedpan. By the end of the movie Norbert has sewed new legs onto the not-quite-dead girl and claimed her as his girlfriend, winning her over with his frankenpenis, but really all of this remains in my mind as a gauzy, indistinct haze, completely overshadowed by the one act of self mutilation that I had pretty much determined I could live without seeing. If a horror movie's most lofty goal is to shock and horrify, mission accomplished. In that sense it's possibly the best horror film I have ever seen. Although I would have preferred keeping my sanity.