Dawn of the Mummy 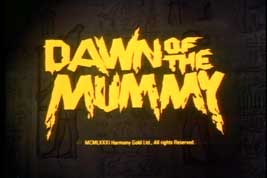 Overview: A bunch of snotty models awaken an ancient mummy by defiling a tomb that a team of graverobbers were about to rightfully defile. Hilarity ensues. And by "hilarity," I mean "carnage." And by "carnage," I mean "bad acting."

The Case For: There's just nothing like finding a good tomb, basking in the awe-inspiring millennia that it has withstood, marveling at the wonders it contains, and then - BAM! - defiling the crap out of it.

The Case Against: If the majority of the characters are one dimensional and that dimension consists solely of "screaming," something is amiss.

When is the right time to bail on a movie during production? Is it when the script calls for models and you end up with a cast who couldn't get jobs modeling clay? Is it when your costume department's idea of dressing those same models for a photoshoot involves huge, frumpy nightgowns that completely obscure the models' figures? Is it when your movie is about a mummy attack, and the mummy doesn't even appear until over halfway through the film? Well, if your name is Frank Agrama and it's the sexy, soulful year of 1981, then forget about bailing! You don't even begin to question the production until a good five or six years after the movie's already been released! And so it was with "Dawn of the Mummy," Frank Agrama's attempt at making a George Romero-style zombie horror masterpiece. Sadly, he forgot three key details. First, he's no George Romero. George Romero was only George Romero on his good days. Second, the zombies. There are zombesque creatures in this film, but only because the actual mummy is a big puss. Third, the horror. The idea behind horror is to give the audience a good scare, not just to show images of people acting scared. If this movie spent a fraction of the time it devotes to people screaming to actually showing the mummy doing something more complex than standing, this film might be a classic. Instead, it's just proof that flawless German engineering may be able to create a car, but brother, they should stay the hell away from the movies. Unless they're movies about cars. 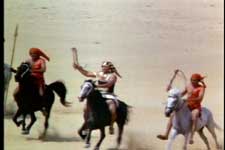 ...Before the cream sits out too long, "WE WILL WHIP IT! WHIP IT GOOD! RAAAARGH!"

The terror begins in Egypt (which coincidentally is also where the terror continues and concludes) in the year 3000 B.C. Frank Agrama doesn't waste any time showing us how life was different all those thousands of years ago. Without such modern luxuries as automobiles and handguns, your average ancient Egyptian posse was forced to deal with punk-ass mofos using a prolonged series of ride-by whippings. Although not nearly as sudden, menacing, or particularly dangerous as today's gang tactics, the three man riding crew in this scene does alright for itself, riding their tricked out horses around some honky village, whippin' bitches left and rizzight. They let the people of that random sand village know the score - watch your step in the hood, because you never know when three complete strangers might suddenly ride into town and start oppressing people. The riders not only whip the people into submission, they also carry off one young boy apiece, presumably for the post-whipping sex. It's never really specified.

We instead cut right to a funeral for some important guy named Sephriman (pronounced "Suffery Man," and frequently said with a randomly chosen foreign-sounding accent to make it as annoying as possible). It's possible that Sephriman is one of the riders from the first scene, but there is absolutely nothing to substantiate that other than the fact that if he isn't, then the first scene was totally useless. The priestess presiding over the ceremony lets everybody know that if the treasures of his tomb are ever stolen, Sephriman will "rise AND KILL." This phrase is repeated roughly seventy times, so there can be no confusion that Sephriman is fully prepared to rise AND KILL. He has absolutely no qualms about the either the rising, or the AND KILLING. So nobody touch that treasure. That is, unless you want Sephriman to rise AND KILL. Because he'll do it, man. Rise AND KILL, that is. Five men stay in the chamber with the sarcophagus, under the priestess's instructions that, in the event of a treasure stealing situation, they are to be come an army of the night (the best kind of army!), and should also feel free to rise AND KILL. With those final words ("rise AND KILL," that is), the priestess leaves the chamber, and the men bow their heads in preparation for a nice dose of crazy red death gas. On her way out, the priestess struts her stuff by getting both the title and titular line, "He who enters the tomb... after it is sealed... will die on the dawn of the mummy!" 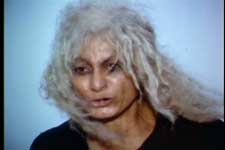 Woo! Look at her! She's like a whole amusement park of ugly!

A snappy transition later, we find ourselves in present day Egypt in the company of three men intent on dying on the dawn of the mummy. They can't get enough of it. Rick, their dashing caucasian leader, celebrates noisily as they blast the tomb open with dynamite. He celebrates noisily a lot. That's more or less his primary mode of communication. Whenever anything happens, his first reaction is to shout about it at the top of his lungs. He blasts open an untouched tomb? "HAHAHA! YES! HA HA!" He finds another door inside? "HAHAHA! GREAT! YES! DOOR!" He finds gold? "HAHA! SEPHRIMAN! YES! WOOHOO! CHIM CHIM CHIRREE!" He swallows a bug? "HAHAHAHA! ALRIGHT! YES! CRACKERJACK! TOP NOTCH! WHOOPIE! DOODLEY DOO! SHABAZZ!" And then, of course, he promptly hits his two inferior, non-caucasian assistants for making too much noise.

As they rush down to investigate their findings, Rick tells his cronies that they can't go in today because the first chamber will be filled with crazy red death gas. Just then, a batshit insane old woman with three teeth and eyes far too big for her skull. It looks like one good smack to the back of her head could pop them both right out. It would also make for a far more entertaining performance than the one she gives. She rants and screeches at the three men about "the cuuuuuuuuuuuuuuuuuuurse," but she is swiftly defeated by the power of Rick's machismo. Even when she tells them that the curse will cause the mummy to "rise AND KILL! Rise AND KILL! Rise AND KILL," Rick is unimpressed. He pulls out a pistol and aims it square at her head. At that range, even his dinky little gun would splatter her head all over the dunes like a watermelon at a Gallagher show (heh heh... Eighties humor). He then fires into the air a couple times, and the old lady goes running off. There's just something hilarious about how deliberately he points the gun right at her before just firing wildly into the air. It's sort of symbolic for the whole movie. It's like the people behind it were going in the right direction, then just said "fuck it," and started filming whatever they felt like. As for Rick, he tells his homeboys to guard the tomb (A.K.A., get drunk and pass out), while he goes to catch some shuteye at a comfortable local hotel.

That night, Batty McOld is still running from the gunshots several hours earlier, and even less surprising, she's still moaning about the cuuuuuuuuuuurse of Sephriman and how he will rise with a seventy percent chance of AND KILL. She comes across a trio of Egyptian men, who promise to guard the tomb for her. Unfortunately for her, with all this running around and moaning in English, she forgot her basic Egyptian. Otherwise she would have known that "guard" is Egyptian for "try to rob, but get our faces burned off." The men go to the tomb, where they find Rick's pals in the wondrous throes of liquor-induced comas. After a prolonged argument about holding lanterns, they enter the tomb and immediately notice it's hard to breathe and there is a foul stench in the air. They push on anyway and manage to last just long enough to split up before their faces burn off. Probably something to do with all the crazy death gas in the air. They each run screaming out of the tomb in turn, and that's the cue for the title screen. Yep, you wouldn't want to put the title at the beginning of the movie, or say, right after the priestess says "Dawn of the Mummy." No, you wait for some random point involving a bunch of no-name characters who will never be in the movie again and have absolutely no effect on anything, other than to prove that yes, there really was poison gas in the tomb. Smooth, Agrama. Really smooth. 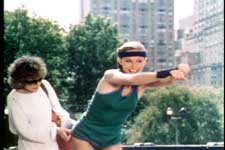 Setting the standard for every other movie to come in the 1980s, right after the title screen comes some cheesy synth song played over a montage of the various models walking down various streets in New York. We then bounce right back to Egypt, where the models are traveling in search of a good background for their fashion shoot. That's right, the entire New York scene is just them walking. No dialogue, no character development, it doesn't even introduce the plot device of the models' trip to Egypt. Just try to calculate the amount of money wasted by having one single, moronic city scene in a movie that is otherwise nothing but desert shots. Then weep at the realization that that's more money than you will ever be able to waste on anything in your life. Bounding between two white Land Rovers, we get to hear snippets of conversation designed to sum up each character in less than three seconds. The breakdown goes something like this:

When one of the Land Rovers loses a tire, Gary and Lisa climb up a sand dune to talk alone. They are exhausted by the climb, but Gary still has enough energy in him to shove Lisa down the other side. That Gary, what a way with women! On her way down, Lisa rolls into a burned human head sticking out of the ground. She starts screaming and doesn't stop for some time. Another hour and twenty minutes, by my watch. The rest of the gang runs up to see what's happening. Yep, they just magically pop up at the top of the dune the second Lisa starts screaming, despite the fact that Gary and Lisa nearly killed themselves climbing the very same dune. Hmm... I don't want to call that a continuity error... but then again, I also don't want to call it anything else.