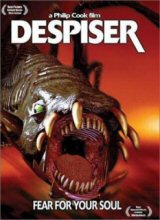 Overview: After losing his life in a noble sacrifice (driving his car off a bridge) a slightly confused artist finds himself in purgatory, where he must prevent an evil creature from collecting enough missiles to blow up purgatory and return to earth. Yes, that is really the plot.

The Case For: The solid objects in this movie are very laid back and don't really mind clipping and sliding right through each other.

The Case Against: The incredibly stupid story is just an excuse for Phillip Cook to show off his awesome computer-generated landscapes and environments, most of which look like they were generated by a broken Nintendo 64.

The intense opening scene of Despiser takes place in purgatory, where a group of brave warriors are riding off to battle using the best mode of transportation purgatory has to offer – a rusty blue sedan with a Virginia license plate. After they reach the battlefield (a big gray wall next to a burning car) the ethnically diverse warriors step out of the car and prepare to do battle with “The Shadowman” for some reason. If it seems like I’m not giving you any background here, rest assured it’s only because I hate this movie. The four brave fighters, all armed with plastic replica Counterstrike weapons, stealthily approach the big wall for about ten seconds before the only woman in the group sees a guy with his feet tied to a cross, forgets all about their stealth attack and decides the best course of action is to scream at the dead guy. Springing into action, the other three walk up to the cross, cut the shoelaces holding the guy’s feet up, dump him on the ground headfirst and then casually walk up to the wall, which has magically transformed into a giant stone church. 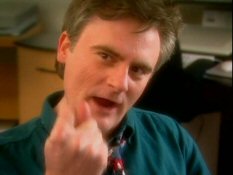 "I've got your nose!"After he loads up his revolver with a magical bullet, which is different from a regular bullet because it has a gigantic red lens flare that follows it around, the leader guy suddenly decides he doesn’t want a woman in his group anymore. He tells “Charlie” to stay behind, and when she tries to argue in her annoying fake accent, he easily wins the argument by winking and cheerfully saying “You just a spring chicken!” which somehow gets her to shut up and stop arguing. Hey, whatever works, I guess.

After the leader, Carl Nimbus, walks through the entrance of the church (from the outside the entrance barely comes up above his waist, but once he’s inside the door is bigger than him) he encounters a pasty white goth who looks like Einstein after someone attacked him with a lawnmower and dumped chalk on his head. After a brief conversation with Carl, the goth (who I guess is supposed to be the Shadowman) shows what a kickass villain he is by pulling a gun, firing and missing. Carl shoots Captain Pastyface, then stands there while a few horrible-looking computer generated bad guys jump through the windows and then fall over while Carl’s buddies shake their plastic guns back and forth while bullet noises play. The Shadowman gets back up, gets shot, runs away, gets shot again, dives out the window onto a balcony, then gets shot some more. After getting shot the final time he slips and almost falls off the balcony, but he grabs on, grunts a lot and manages to haul his fat ass back up onto the ledge. I mean, getting shot 20 times without dying is one thing, but only the truly hardcore can survive a 20-foot drop onto grass. The opening scene ends when Carl unceremoniously shoots him with the magic lens flare bullet, causing him to spend several seconds flopping around on the ground while shitty looking drawn-in purple electricity flies all over the place and a blue line appears in the sky and starts wiggling around while the entire screen turns white.

I couldn't think of a good way to describe Gordon's argument with his boss so I made this animated gif instead.Sadly, that opening scene is the high point of the entire movie, as the next scene lets us experience all the excitement of a graphic designer sleeping on the keyboard. The hero of the story, Gordon Hauge, is rudely woken up by his boss, who proceeds to lean over and start hitting random keys on the keyboard, which somehow makes the mouse cursor move across the screen and close the image Gordon was working on. This causes the image to be erased, since Gordon’s image program isn’t one of them newfangled ones with a “Save changes?” dialog, and after a brief argument with his boss, Gordon drops a verbal atomic bomb by standing up and declaring “You’re gonna get squat right now, you narrow minded, uncreative buttplug!”

After getting fired for letting loose such a vicious barrage of nonsense, Gordon drives home to find a U-Haul truck parked outside his house. This doesn’t clue him in that something is going on, and neither does the fact that when he walks in the front door, his friends are there taking all the paintings off the walls and putting them in boxes. After cheerfully asking “Hey, what’s going on?” our highly observant hero is shocked to learn that his wife is leaving him. His wife informs him that they’ve been ordered to leave their house “because of their deliquent rent.” When his friend Norm talks about loaning him some money, he responds by saying “Norm, we don’t need your money” while standing up and starting to take his pants off. I honestly don’t know what to make of that. Anyway, she asks him about possibly getting an advance from his boss, and he responds by happily telling her that he quit. When she starts to freak out, he tries to get her to relax by adding “Well, actually he fired me first, then I quit!” but somehow that isn’t enough to calm her down. What a bitch.