The Mystery and Wonder of the Musical Jamboree 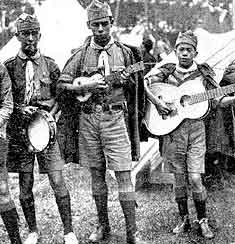 Could it be? A jamboree?Early in the development of animal society, it was clear middle ground was needed between the different species in the kingdom. Because so many types of creatures had to coexist and because there was a myriad of mutual concerns amongst all of these creatures, the creation of an open forum was necessary. The genesis of this forum was a slow process, one hampered by distrust, greed, and general spite. Bears didn't want to get along with alligators, and for good reason. What did an alligator have to offer a bear, anyway? But with man's growing dependence on destroying pretty much everything, these differing species would have to unite to discuss issues of territory, defense, and a rapidly shrinking ecosystem. While it took some time, an open dialogue was established. And in a big way, no less. After centuries of silence, the sounds of cooperation and common ground echoed through the forests and swamps as a spirited tune. Animals were united by nothing less than the awe-inspiring force of the musical jamboree. Today, in a world plagued by war, millennium-old grudges, futile territory struggles and stupidity, it's time we humans utilize the power of the musical jamboree to usher in a new age of peace and understanding.

To make use of the musical jamboree, we must first understand its origins. When the first musical jamboree occurred, creatures of all types got together, put aside their differences, and each contributed their own uniqueness to the wonderful jamboree tune that flowed through the lands. Bears would provide the bass with their deep growls, alligators would let raccoons play their teeth like xylophones, possums would bang sticks on rocks and logs to round out the percussion, and birds would chirp in time to the beat. The end result was a musical experience as raw and primal as the soundtrack to Teenage Mutant Ninja Turtles 2 and as engrossing as a good book adapted into a movie with lots of special effects, like Teenage Mutant Ninja Turtles 2. Every creature from the lowly but diligent ant to the overbearing ox had a place in the jamboree. As long as a creature could carry a tune and contribute to the festivities, it was welcome to participate. Since that first jamboree, thousands more have occurred all throughout the world, from the swamps and bogs to the jungles and forests. Every place there can exist life also can exist the seeds of the musical jamboree. It's just up to the good-natured beings of the world to water those seeds and let the magic grow.

Unfortunately, musical jamborees have been in sharp decline since the Industrial Revolution. However, many are still known to occur when the time is right. Musical jamboree researchers everywhere agree that you are most likely to encounter the following types of joyful celebration:

Animal Jamboree
The original type of jamboree still occurs periodically, although the motivations have changed much. In olden times, the jamboree was meant to build a bridge to the future, but anymore they are used only to build bridges to the past. As the world becomes increasingly hopeless, dreams take a back seat to memories. This decline in imagination can be attributed to the death of innocence, the point in time where someone or something becomes damaged goods and no longer sexually desirable. Still, these jams are spirited and encompassing of all creatures. Except stink beetles. 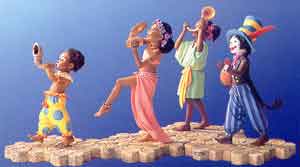 Even godless clowns can't deny the mirth of a jamboree!

Hillbilly Jamboree
While it can be argued humanity has already embraced the musical jamboree, it can also be argued that hillbillies aren't a part of humanity. The hillbilly is essentially the lowest rung of humankind, existing even a notch below hobos and Internet writers. Even still, the hillbillies have managed to create a respectable replica of the musical jamboree. Their music, however simple and primitive, brings together a cornucopia of slack-jawed yokels for the purpose of song, dance, and infectious rhythm. The instruments of a hillbilly jamboree are pots, jugs, and any other basic items. When the jamboree gets going, hillbillies will become increasingly experimental with their music, using all kinds of unpredictable items to add texture and depth.

Undead Jamboree
Nothing is without danger, not even jamborees. In times of great darkness, it is quite common for a diabolical demon to rise from his slumber and command an army of skeletons and other ghouls to make merry music of the damned. If you encounter an undead jamboree it is best that you run like mad or suffer the eternal consequences. Cover your ears, because while the music is playful and spirited, the musicians are anything but! The product of the undead jamboree will be one terrifying tune that you'll carry to your grave. JUST WHERE THEY WANT YOU! You can recognize the undead jamboree by its usage of bone-based instruments. Skeletons will use their skulls and ribcages to produce infernal ditties sure to lead your ears into the fairy circles of hell. Their demonic conductor will also highlight each of their songs with a spine-tingling and ghoulish laugh. Finally, be aware that the undead jamboree will feature astonishing chorography as well as breathtaking amateur pyrotechnics and juggling. It's a just a shame that if you behold an undead jamboree, you won't be beholdin' anything else ever again.

Now more than ever, it's time we humans take a lesson from the animal kingdom and start working towards a lasting peace. Sure, it didn't really work for them, but it can damn well work for us. With so many other primitive life forms taking advantage of the musical jamboree to bring unity, why can't we as humans? Would it be so hard for the Palestinians and Israelis to come together and create a jovial tune to help heal all the pain? Really, I don't think I'm asking a lot. The area might be war torn, but there are still plenty of musical instruments available. If the animal kingdom has taught us one thing – other than that there is never a bad time to start licking your crotch – it's that anything that makes noise is a musical instrument. With a little planning suicide bombers could explode themselves in time with the beat, guns could be fired at just the right moments, and everyone could have a merry time. The same goes for India and Pakistan. You want a peace plan? Gather both your armies on the border and challenge each other to a musical battle. After a few tense sitar duels, both armies will give into the moment and join in on a ruckus battle of conflicting tunes that eventually blend into one harmonious tune. What's that sound? That's the sound of peace!

It wouldn't be a Wednesday without a new advice column from Helen, now would it? I guess it probably still would be. If you hate Helen, then you best be sucking down a bowl of karma, because she's got a new column up just to spite you! If you love Helen, then there is also that very same column up to amuse and enlighten you. Either way, you're getting some Helen action. Preview Activated:

Helen, for years I have failed in my efforts to make contact with my dead family. When I heard that you have opened the portal to the spirit world I was overjoyed. Can you please contact my mother, father and two sisters to tell them I am sorry for killing them with a breadknife.

Find out how Helen tackles this and many other questions by reading her latest column!