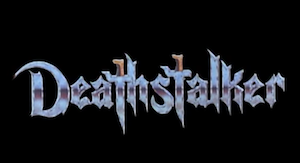 Overview: A film crew makes a movie called Gor, adds a bunch of rape scenes, then crosses out the word Gor and writes Deathstalker instead. The end.

The Case Against: Watching this movie basically makes you an accessory to rape.

Every once in a while, you sit down after watching this week's cinematic atrocity and start to brainstorm the perfect introduction for a zany hilarious comediashically wackety bonkers McCracked.com send-up, but then you stumble onto someone else's half-literate user review on IMDB that just perfectly captures the entire movie in one brilliant chunk of rage-fueled word-bile, and you steal it and use it because who's going to stop you? And so it is with Deathstalker, and cold, calculating Internet Ranger "rlcsljo", who must be some kind of shitty manboob wizard movie-reviewing Rainman. Take it away, you magnificent autist:

"This movie is packed with everything you would expect in a sword and sorcery film(except explicit sex)!...there are twenty-five breast shots, twenty-seven butt shots, six sword fights, fifteen impalings, two amputations, one arrow in the neck, three beheadings, on horse dragging, one eye-candy, one finger food, one mud wrestle, one pig face, one magical trans sexual operation, two bitch slappings, one crotch stabbing, one head smashing, and one draw and quartering."

We would try to ask what sort of "sword and sorcery films" rlcsljo usually watches, but we decided not to, partly because we're terrified of the answer, and partly because we already know said answer contains the words "full penetration" at least twice. But regardless of his unforgivable sexual peccadilloes, our anonymous friend has managed to completely reproduce the spirit of Deathstalker: wall-to-wall violence, misogyny, more violence, heroic sexual assault, and even more gratuitous, yet poorly choreographed violence (featuring actors fresh out of the Captain Kirk School for Remedial Martial Arts.) In short, this is the movie that Goreans were actually picturing in their fever dreams when it was announced that there would be a Gor movie.

Not that we actually verified that meticulous count of breast and ass shots, mind you, because it's not possible to do so unless you're some sort of cybernetic automaton. You know how if you say/think of a random word like 'elevator' or 'potato' over and over and over it starts to lose all meaning and sound like weird alien gibberish? Watching this movie is like that for boobs and butts; 20 minutes in and you'll have seen so much nudity you'll forget everything you ever knew about human anatomy and go blackout insane with confusion/rage, waking up 9 years later drooling in a ditch at the foot of the Andes with a fistful of alpaca hair and what you hope is a partially eaten guinea pig, because that's the kind of weird foreign shit that happens outside America.

Where were we? Oh, right, Deathstalker. Well, it turns out that we can't just end the review on that list of assorted MPAA triggers, because that's a pretty normal level of sex and violence for a bog-standard early-'80s barbarian movie. Deathstalker manages to set itself apart with new and exciting levels of gross, baffling, and jaw-dropping spectacles which will make you question why all of humanity hasn't already been wiped from the face of the earth by some benevolent deity or stereoscopic alien race. Our hero, gyrating barbarian uber-hunk Deathstalker, supposedly our hero and savior, is the only man who can stop the vaguely evil-ish sorcerer-guy Munkar. Except...well, as heroes go, it turns out that Deathstalker isn't particularly heroic:

Well, Deathstalker might be able to just chow down on the King's Royal KFC, tell him "I hath eaten all the skinne, milad, and now I must away", flip him the bird and go back to his usual life of raping and pillaging (mostly raping). But when a grimy old hag tells him that he is the chosen one, he has no choice but to go on the exact same holy quest anyway: a sacred crusade to end consensual sex and cure Terminal Wizard Cirrhosis (TWC) once and for all. The hag uses her magical telepathy to annoy the everloving shit out of him (and us) until he agrees to fuck and kill and fuck-kill everything to fucking death.

Seriously, right after Deathstalker leaves her hovel, he bends over to take a sip of cool, clear water and suddenly he hears "DEATHSTALKER, YOUR THIRST SHOULD BE ONLY FOR THE THIRD POWER". Deathstalker seems like a pretty stubborn fellow to us, so we can only imagine how long this went on before he gave in. DEATHSTALKER, THAT ROAST PIG WILL FEED YOUR STOMACH, BUT ONLY ULTIMATE VICTORY WILL FEED YOUR SOUL. DEATHSTALKER, BEFORE YOU PICK YOUR OWN LICE, YOU MUST CONFRONT THE LOUSE KNOWN AS MUNKAR, LORD OF ALL EVIL. DEATHSTALKER, YOU SHOULD ONLY BE PATRONIZING THE WHOREHOUSE OF ULTIMATE GLORY IN BATTLE. DEATHSTALKER, THE ONLY LEAK YOU SHOULD BE TAKING IS LEAKING BLOOD IN THE NAME OF YOUR GREAT QUEST.