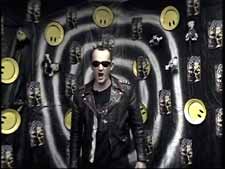 Those smiley faces kind of throw off the whole scary vibe.

While Stalin was in power in the Soviet Union, he screened and approved every single film that was released throughout his empire. He was a busy guy, what with all the time he had to spend killing his own citizens and ignoring the basic tenets of Marxism, so in one year only five new movies were released. As you can imagine, it was a stifling time for any new artists and the Soviet cinematic scene became bland and repetitive. However, I'd vote for a system like that here in the United States in a heartbeat because just so crap like "Terror Toons" would never see the light of day. I'm not sure exactly how a project this awful ever got off the ground, but I assume someone gave Joe Castro a digital camera and a "1001 Wacky Cartoon Sound FX" CD for his birthday, so he immediately went out and contracted Rudy Balli to come up with the worst script he could muster. The technical aspects of this movie - bringing cartoon characters to life and blending animation and live action - were obviously way beyond the scope of Castro's meager budget, so one has to wonder why he even thought he could get this thing off the ground. The animations - I do have to give "Terror Toons" credit for actually having any - typically consist of two or three choppy frames and blend seamlessly with the live action in the sense that Chris Rock would blend seamlessly with a Klan meeting. Add a bunch of porn stars trying to get into legitimate acting, a couple of guys in moronic suits, and a few thousand spiral effects to the mix and you've got yourself a healthy dose of "Terror Toons!" How nice for you.

As if "Terror Toons" wasn't bad enough to stand on its own, the movie begins with an introduction by the official Brain Damage Films narrator. His freakish spiky hair and inability to speak more than three words a minute never fail to spook audiences. Specifically, they are spooked by the fact that a production company could actually have low enough standards to let this Chromosome 21 trifecta speak on camera. The narrator not only sets the mood, he spoils the last half of the movie entirely by revealing that Cindy is the only one who can stop the villains. Good job there, shitsack. Once Captain Obvious finally finishes ruining the one bit of quasi-suspense the movie has to offer, we blast into the action like an illegally maintained scud missile missing U.S. troops (zing! Take that, Saddam!). 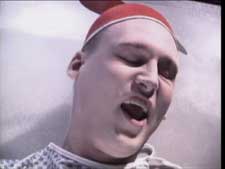 Ask yourself, are you this man? If the answer is "no," then your life is probably going alright.

We open on a little boy strapped to an operating table. Of course, when I say "little boy," I mean "a full grown man in pajamas and a propeller beanie." For some reason, Castro put full grown adults in all of the kid roles. It's probably the same reason that he made this movie at all - he's certifiably insane. Seeing a grown man squirm and whine for his mommy is funny for the first few seconds, then it becomes boring, then it just gets sad as the realization sinks in that this guy doesn't even have a trace of dignity left. Then it becomes boring again. The camera pulls out to show off the colorful cartoon background (read: piss poor blue screen that looks like a Crayola box threw up) just as Dr. Carnage appears. For the record, the man inside Dr. Carnage's green foam rubber carcass is Matty Moo, who was also inside the Jack Frost suit in the classic "Jack Frost 2." What can I say? The guy knows how to pick a script.

Dr. Carnage shows off how evil he is by shooting the manchild with a crappy laser that has no effect whatsoever while a hideously high-pitched laughter sound effect plays. That laugh is the bane of my existence. Luckily, it only occurs forty four thousand, nine hundred and twelve more times before the movie is out. Dr. Carnage sticks a needle in side of the manboy's skull, which causes his eyes to turn into horrible spirals. The doctor then cuts open his victim's stomach and pulls out his skull. Through his stomach. We're talking about the skull from his head, here. Just so we're clear. Sigh... One craptacular graphic later, we finally get to the main title. 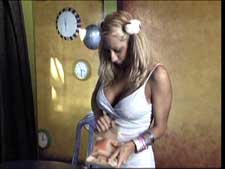 Candy spends her days like all the other girls in her second grade class - staring down her enormous rack.

After the painfully long credits (which not only include Matty Moo, but also Lizzie Borden and Shimmy Maxx), we fade in on a woman in her twenties with enormous fake breasts. Because this is a crappy horror movie, Castro makes sure to include a few good shots of her soapy bosom, as well as an obviously planned nipple shot. That sort of blatant smut is standard fare in this sort of movie. Sure, there's something a little off about the way that the woman sings "Rubber Ducky" and the way she has her hair in pigtails, but I'm sure it's nothing. Oh wait, I know what's bothering me - she's fucking supposed to be a little girl. She's Candy, the precocious little sister. The character is written as six or seven years old, but what the hell, why not have her played by a damn porn star? Oh, because it's freaking pedophilia, that's why!

Once Candy manages to cram her silicone-transportation modules into her dress, she bounds downstairs to greet her mother. Sticking with the theme of casting people who are indescribably freaky in their parts, the mother is played by drag queen Shimmy Maxx. I've seen this movie twice now, and I honestly had to check the internet to figure out if Shimmy is a man or a woman. That's not to say that she/he is a convincing drag queen, just a frightening mass of genetic material. She/he looks like the love child of Eddie Izzard and an American bald eagle. She's got all of Izzard's transvestite makeup, hair, and fashion sense, but with the addition of six inch talons on the end of each finger. The mother gives Candy a package that came for her in the mail. After telling Candy that she and her sister Cindy can't have any friends over, the mother and father leave for a wedding. 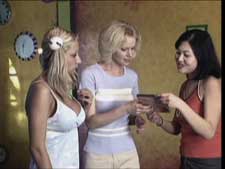 It's hard to watch them make the same mistake I did - picking up this damn movie.

Candy goes back inside and eagerly rips open the package like the fly of her last trick. Wonder of wonders, it's the "Terror Toons" DVD! And yet, Candy is actually excited. Cindy and her friend Amy mock Candy for watching cartoons. Candy defends it, though, claiming that it's not a cartoon, "It's a new style of animation!" Wait, isn't animation basically a cartoon? And didn't the parents say Cindy couldn't have any friends over? Amy was already in the damn house. That has to set some sort of record for the shortest amount of time needed to violate a parental edict. For the record, the actresses playing Cindy and Amy are twenty-nine and twenty-three respectively. They're both supposed to be about seventeen. It's one thing to cast people in younger roles, but at least cast people who are close to the same age. Oh well, if that was the worst age problem "Terror Toons" had, I'd be a happy camper. Instead, I'm a miserable, miserable camper. Speaking of misery, Candy scampers off to watch the "Terror Toons" DVD. The fake DVD menu has three options, which ironically is one more than the real DVD menu. Rather than watching the movie or show or whatever it's supposed to be, Candy goes right to one of the extra features - "Terror Toons Live." What's that you say? Cartoons are rarely done live? It's a terrible strain on the artists' wrists? Yeah, well I can quote The Simpsons too, smart guy, and that is just the first of many Simpsons rules that the movie breaks over its badly drawn knee.