How to Make a Monster

So, after we're introduced to the main characters and their horrible annoying gimmicks, we meet another character named Laura (Clea Duvall). Laura is the second in what I like to call the "'How to Make a Monster' Trifecta of Ugly Cunts." Again, I'm pretty sure Huang just made this movie as a cruel joke: There are three women in this movie and I guarantee not one of them has ever had sex without a paper bag over her head.

I mean, seriously, how do people cast a role like this? Not only is Laura butt-ugly, her character is an annoying, submissive, whiny woman who I pretty much wanted to beat to death with a hot iron from the second she appeared on screen. I can only imagine what the casting call ad looked like (thanks DocEvil for your never ending love and devotion): 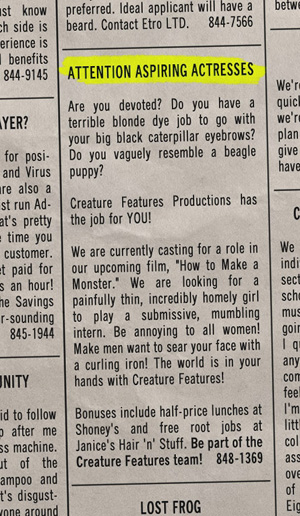 Now that I've shown you the movie's major players, I think it's time to introduce you to the other important plot piece: The "motion capture" suit. It's a little-known fact that this suit was constructed out of tin foil and wires by a group of Nazi scientists, and that it was hidden away in a vault after Hitler deemed it "a little too mean, even for a concentration camp." Around the time the suit arrives, we meet the third woman in our trifecta, a really ugly stripper (Julie Strain from the Heavy Metal movies). She slaps the suit on for the "motion capture process" (a blatant excuse to show off her gigantic nasty fake tits for a few seconds), when lightning strikes a power line outside the office and kills the power.

Of course, given that the movie indicates they've worked a whole twelve hours at this point, the programmers are devastated to learn they've lost all their work in the ensuing power outage. Sol's "amazing" AI chip (an old motherboard under a glass dome) may be ruined, and things are looking pretty grim. The stripper storms out and the three have a group meeting with Peter and Laura. They decide to play the game they supposedly just lost all the info for and the loser has to stay and work late. Upon completion of the game, the boss lady tells them, the person who designs the best feature of the game will win a million dollars. Since that figure is 100,000 times more than the actors were paid to be in the film, they all jump at the chance. 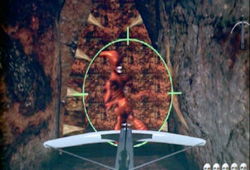 "Yeah, I like to call it Silent Hill meets Hexen meets a giant cave opening that looks like a vagina with teeth in it."

Here's where Huang's technical expertise comes in again. Since he knows nothing about videogames, he had the set designers litter the hallways with posters for games from other companies. And not just any games, either – bad games. Terrible games. This is fitting with the rest of the film, though, since the title the programmers are making would literally be the worst game ever made.

Let me repeat something: I understand a little technical ignorance. I know movies are made to be entertaining, not totally factual. However, what Huang and his CGI people (who were undoubtedly lured from the local Video Hut for an enticing fifty extra cents an hour) created is terrible. Awful. It's not a video game, it's a series of terrible-looking CGI videos, most of which are unfinished and littered with wire-frame models. So the programmers, along with Laura, sit down to play a friendly game. Sol goes out first after his controller is sabotaged (because he's black, he reminds us), and thus has to stay late.

Laura ends up winning the match after battling a bunch of monsters that look like the result of a drunken night between Pikachu and a nest of scorpions. This is because she was the "1991 Ms. Pac Man world champion," she says. Since there's a definite correlation between archaic old eighties arcade games and first person shooters, this revelation really adds a lot to the movie's believability, as well as Laura's character. If you're a retard, that is.

So Sol stays late, and finally, approximately 45 minutes into the movie, something interesting happens: He dies. It's unfortunate the actor playing him couldn't take the Brandon Lee path and die along with his character, but whatever. It's not even like it's a good death, though – a big mechanical hand reaches out from under the desk and grabs him, the desk shakes around a little bit, and we cut to a new scene.