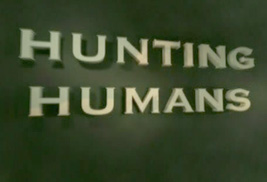 The Case For: If you're really ugly you could watch the actors in this movie and say "hey, at least it's not that bad."

The Case Against: If you are a normal-looking person who dislikes bad movies you will likely walk away from "Hunting Humans" with both a brain tumor and a sick stomach. 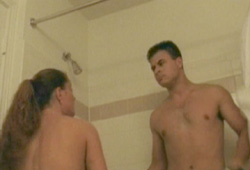 Sorry, Aric, that shower could spit acid and it wouldn't wash the stink of "Hunting Humans" off you.

Ever since I started reviewing movies for Something Awful SA Forums user "Tarid" has pestered me to review "Hunting Humans."

Well you know what, Tarid? Fuck you. No, seriously. I don't know what I ever did to you, but I'm sure it wasn't bad enough to warrant a request like that. You have created a rivalry, Tarid, and I will see to it that your fate involves you being forced to watch this movie while someone shoves an industrial curling iron up your ass.

Here is the main problem with "Hunting Humans": In the movie's 90 minutes, precisely two things happen. And they're not even good things, or interesting things. "Hunting Humans" does to thrillers what Marge Schott did to the Cincinnati Reds, up to and including having a dog take a dump on an already-shaky tradition.

In fact, if this was an objective summary, I could use this here bulleted list to accurately describe the whole movie:

But this is not an objective summary. It is a Something Awful movie review. As such, I am given liberty to say things other reviewers may not be able to. For instance: This movie sucks. Hard. "Hunting Humans" is the kind of project that comes about when a bunch of people from the YMCA summer creative writing course decide to get together, overdose on Benadryl, and write a movie.

But maybe I shouldn't rip on the director for once. I mean, 100 years from now film students might look at "Hunting Humans" as the start of a filmmaking revolution, with Kangas at the helm. Sure, the concept is nothing that any 17-year-old Livejournal poet hasn't come up with, but it's all about the execution of the film.

For instance: Kangas has pioneered the act of smearing a layer of Vaseline over the camera lens before filming a movie. This creates a number of interesting effects, such as making some of the movie's action almost impossible to see. However, at times, an unreadable screen is a good thing, especially in the case of "Hunting Humans." This is because nearly everyone in the film is incredibly, stomach-churningly ugly.

Like I have said on multiple occasions, I am not a good-looking guy. I am aware of this and as such I do not turn my critical eye towards the looks of others. However, in the case of "Hunting Humans" I feel something needs to be said. This film contains more ugly people than the line to Wrestlemania. If everyone in the world resembled the actors in "Hunting Humans," modeling agencies would scout midnight hunting gear sales at Wal-Mart for new clients. It is almost as though Kangas only had enough money to hire one person for his film, so he simply employed a bunch who, when he added their chromosome counts, came up to one human being.

But words aren't enough to accurately describe how ugly these people are. This chart should help a little bit, much like seeing a still of a person being brutally murdered captures at least a small fraction of the implied horror: