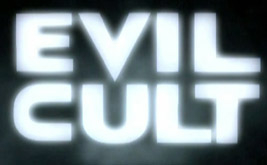 Overview: Honestly, I've seen this movie twice now (plus scanning it for screencaps) and I'm still not entirely sure what the hell's going on.

The Case For: This joke has been made before but I'm being serious when I say there's not one reason to watch this movie.

The Case Against: Some of the movies SA has reviewed are Oscar-worthy compared to this sucker.

You know that friend everyone has? The one who cracks in-jokes from five years ago and still thinks they're hilarious? The guy who watches Super Troopers two or three times a week and can fire off topical quotes from the movie for almost any situation? The one who you kind of roll your eyes at when you see his name on the caller ID?

Well, about five of those guys annoyed someone into giving them a camera and DVD burner and now we have a movie like "Evil Cult." I bet you wish you would have picked up the phone now.

I knew something was wrong with the movie before I ever even put it in my Netflix queue. Generally, I just pick the lowest rated movies I can find, wait for a day where I'm not feeling that suicidal, and pop one in the DVD player. Even though "Evil Cult" has a one-star rating, the first few reviews on the page are excellent. Fawning, even. For instance, "drjohnson," of Oregon, has this to say about the film:

This very well could be the "Evil Dead" of the new millennium. Reminds me a lot of Sam Raimi and Bruce Campbell's work in the late '70s - early '80s. Pretty decent effect for a super low budget movie. Tons of funny one-liners. Over the top acting. Buckets of blood! Woo Hoo!

Well, "drjohnson," let's set something straight: I am not a member of the rabid Evil Dead fanbase, but I am still offended that someone could compare the films like that. And after a couple of viewings, I'm not sure that "Evil Cult" is even really a movie. Instead, it is more of an idea - a horrible, terrible idea - that someone actually thought other people would enjoy. Kind of like a snuff film but with an even smaller target audience.

Still, a couple positive reviews don't mean anything, right? There are always a few idiots who like a bad movie (see Home Alone and its sequels). However, while doing some research on the film at IMDB, I also came across another glowing review for the film. From Oregon. Again comparing it to films like "The Evil Dead" and "Army of Darkness."

Using my amazing powers of deduction, I have come up with a couple of conclusions: "Evil Cult" is probably the worst movie I have ever seen, and it's safe to assume Co-Directors/Writers Rob and Neil Taylor are from Oregon. It's also almost certain that they spammed positive reviews of their godawful film on various Web sites.

Well, Taylor brothers, I can imagine the three people who read the IMDB bio did it because they drunkenly mistook your movie for incest pornography. And they're vastly outnumbered by the people reading this review. And if you readers think I am even slightly credible, I am begging you not to watch this movie. I realize some of you are masochists. I realize you want to watch the worst of the worst. But please, for your sake, stay away. And if you absolutely have to see it, make sure you pirate it so these cocksuckers don't see a goddamn dime.

I am not sure what format the Taylor brothers used to film "Evil Cult" but I am fairly certain it was not any kind of store-bought technology. Instead of using a camera they got at Target or something, I think they may have pooled their lawn-mowing money and built their own film-capture medium. Something capable of shuffling the various film filters at random and shitting out a garbled mess a few hours later.

Let me explain: Not one scene in this movie uses any kind of natural color. Nor are the modifications subtle. Instead, the Taylor Brothers simply mashed buttons on whatever camera they did use until the film that came out the other end looked like a clown wiped his face on it. Since most of the film is shown in "deep sepia" or "sky blue" or some other auto-setting, it wouldn't be surprising if "HAPPY BIRTHDAY, BOYS!!!" scrolled across the bottom of the screen at some point during the film.

But it's not that they can't direct or write a movie. It gets so much worse. Not only did Rob Taylor have a hand in the behind-the-scenes work, he stars in "Evil Cult," too. As Neil Stryker, Rob Taylor shows us the full extent of his acting chops, which include (and are limited to):

We get our first taste of this during the beginning of the film, when Stryker battles some eighteen-year-old kid who, because he is wearing a lab coat and a white wig, is supposed to be some kind of mad scientist. The scientist jumps into a portal, jumps out, gets shot, and we cut to the opening credits. There's no real explanation as to why any of this happens; instead, after the fight, we see Stryker walking down an old road carrying an old duffel bag. The viewer, I suppose, is simply supposed to make up a reason for this, which is still better than anything the Taylor brothers could ever come up with.

Stryker is quickly picked up by a man named Walter (Greg Gosser), and although he is supposed to be some sort of supercop, does not protest when the man - who is wearing what looks to be a burlap bag with a cape attached to it -- offers to take him to his house for "some food and rest."

Not that anything in the film makes much sense at all. Film editing, like every other facet of movie creation, is a mystery to the Taylor brothers. Apparently they were so excited about making movies they just skipped learning how to do it. Besides a natural affinity for the "fade out" button on their Handycam (literally almost every cut fades to a black screen, even if the next one takes place two seconds later), the boys love one other thing: Split-second takes. Countless numbers of them. I do not think there is a scene in this movie which lasts longer than three seconds, and that's probably just because one of the brothers forgot to hit the "stop" button and the onscreen actor kept rambling to compensate.

Of course, when they pull into Walter's driveway, Stryker sees something is wrong. Bad actors pretending to be cultists are hanging out everywhere, for instance, and they're all wearing pajamas and smiling a lot. Additionally, the house, which looks huge on the outside, is essentially constructed of two-foot wide hallways and blue light.

A lot of the movie's "humor" (I use quotes much the same way a historian might call Hitler a "nice" guy) comes from its dialogue. As I mentioned before, a large portion of Stryker's lines come in the form of terrible one-liners. Rob Taylor doesn't just want to say bad lines, however: He wants to say them in a horrible voice. Apparently Taylor's idea of a stereotypical action hero involves saying every single line in a tone that makes him sound like he just gargled a gravel-and-bleach cocktail. This is compounded by the fact that the movie is approximately 18 hours long and Taylor's nu-metal goateed mug is onscreen for 17 of them.

Stryker is then given a tour of the house and within ten minutes manages to sleep with one of the cult girls (at least I assume he does, the closest the movie gets to a sex scene is him kind of slumping onto a pillow and going to sleep) then breaking into a room of the house he is forbidden to enter.