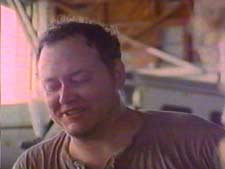 Wow, you can almost feel the stew mastery.

Work, in this case, is the garage of an airport. Tom is approached by a genial, corpulent, sweat-stained gent by the name of Stewmaster. How did he get the name Stewmaster, you ask? What a coincidence, that's what Tom asks, too! Ooh, what luck! Stewmaster spends about five minutes talking about how it's such a funny story, then it turns out to be completely self-explanitory. The man makes a mean stew. Note that this will not come into play at any point in the movie. No one gets killed with stew, stew doesn't foil the zombies, Leeza doesn't have sex with stew - stew and the fact that this fatass is its master are both completely irrelevant. I can only assume that the original script included several scenes that pivoted on the complete and utter mastery of stew, but with a budget of $5.99, some things had to go. Now all Stewmaster does is give Tom his paycheck, which includes a forty percent pay cut. Tom is justifiably upset about this. Some stew would probably make him feel better, but there isn't any. Oh, the irony! 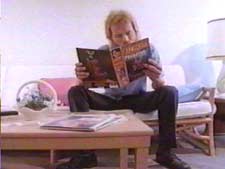 When Tom tells Leeza about the pay cut, she offers to return to her old job, but Tom refuses to let her work because she's a woman and women are meant for making babies, cooking, and cooking babies. Instead, he resolves to get a part time job. Leeza is about to go out shopping, which makes Tom suspicious because she didn't do it during the afternoon. Silly Leeza, women aren't allowed on the streets at night! She goes out anyway, so Tom decides to kick back and read a magazine, and Tim Ritter decides that we need to watch him read the entire thing. This is the longest, most awkward stretch of film I've ever watched. It's just Tom and a magazine for so freaking long.

Once he finishes the magazine, he notices a black book sitting on the coffee table. The moment he opens it, the entire scene becomes lit in red, signifying that this is a black book of evil! Tom reads Leeza's account of having wild sex with Ben right on the couch where Tom is sitting. There are plenty of visuals to accompany the description. You've only seen a couple pictures of Ben, so maybe you're not disgusted by this, but I'm choking back bile, here. Tom doesn't seem too thrilled by it, either. He takes out his frustration in a constructive and mature fashion, i.e., going to the beach and beating the crap out of some guy. Twice. Now, I can't be sure, but I think that he beats up the same guy twice in a row - once on the boardwalk and once in the water. Lowtax disagrees with me on this point. He says that when Tom punches the first guy over the edge of the boardwalk, the guy disappears altogether, then Tom beats up a second, different guy. You can go with whichever stance makes you happy, but let me just pose this one question: how can a person just disappear? Hmm? Answer me that, Lowtax! People can't just vanish. It doesn't make any sense, and then what kind of movie would this be? I think I made my point. 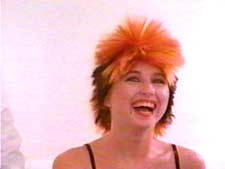 I don't know what happened to her hair, but I'm sure she can sue for it.

We cut to a car pulling up onto Tom's driveway and lawn, establishing the theme of people being absolutely unable to park properly in this movie. Ben and his new girlfriend Angel get out, laughing hysterically for no reason. Angel is your stereotypical freespirited teen, if your definition of a stereotypical freespirited teen is a pasty blob with an iguana on her shoulder and a mutant hedgehog growing out of her scalp. As far as I can tell, Angel exists for the sole purpose of pissing me off, and me specifically. Not since "Nukie" have I hated a single individual with such passion. She doesn't stop laughing for a second, and everything she says is not only horribly acted, but annoying as fuck. I'd rather have my toes pecked off my angry crows than spend sixty seconds in a room with this woman. The first time she speaks it's to ask if Tom's into threesomes, then she immediately calls him boring and casually tells him to go get a purpose in life. Well she's ugly as sin and has a horrible fashion sense, but at least her personality sucks. She goes off to the bathroom, so Ben uses the opportunity to ask Tom for drugs.

Proving that Tim Ritter is hep to all the drug lingo, Ben uses six different euphemisms for marijuana, a few of which haven't seen the light of day since the fifties, then asks for cocaine. It's quite a jump from weed to coke, but hey, Ben's a sixty-five year old party animal! Tom tells him he'll check and goes upstairs. The joke's on Ben, though. Tom really went to cut Angel's head off! Ha! I love that gag! To complete his revenge, Tom throws an incredibly fake representation of Angel's severed head at Ben. It hits him, making a delightful "spluchik" sound. Somehow, Ben dies from this. Tom buries the bodies out in the wilderness, taking time to French kiss Angel's head (he killed Ben for having sex with his wife, remember), then head for home.

The next morning, Tom is a little crotchety. He had a big day of murder, after all. Leeza tells him that an electrician is coming to fix the ceiling fan in the guest room during the day, which for some reason causes Tom to run from the house. Whatever. Tom ends up at a seedy bar, where the background noise is so bad that even Tom's voice over is practically unintelligible. He comes to the conclusion that Leeza is not to blame for her adulterous ways, but rather it is men like Ben who are "ruining" her. When Tom returns home that night, he finds Leeza's black book under the mattress. Again, a red light hits him as soon as he opens it. This time, there is an entry about having sex with the scrawny, redheaded electrician. The scene is like something out of a porno from the Seventies. Leeza actually uses the line, "So, Mister Electrician, how'd you like to fix my wiring?" Seriously. Tom shouts out the question that's on all of our minds: "Why is she writing all of this down?" Yes, why is she writing all of this down? The plot thickens to a watery broth. 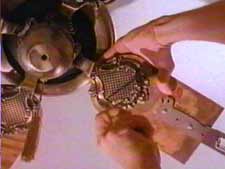 The horrific world of fan maintenance!

Tom stays home sick the next day while Leeza goes out to play tennis. Tom calls the electrician and claims that the fan isn't working. Because this movie takes place within a fantasy world, not only can the electrician come out to the house that very same day, but he can get there before Leeza even gets home from a damn tennis game. If this was real life, Tom would have to wait three or four weeks minimum to get to kill this guy, if they even sent the same guy! While he's waiting for the electrician to come, Tom attaches machetes, which he just happens to have laying around, to the end of each fan blade. By the time the guy actually shows up, Tom is giddy with anticipation. In fact, he spends the majority of the rest of the movie laughing like an idiot. When the opportunity presents itself, Tom grabs the electrician around the groin and hoists him into the spinning fan blades, chopping off the top of his head. He then stashes the body in the attic. He's positive that Leeza will never go up to the attic. Hell, she won't be leaving the kitchen anytime soon if she knows what's good for her. Tom commandeers the electrician's van, nearly running over the movie's sole black person in the process. The black guy gets a nice, black line to say, too: "Where you get yo' license, a gumball machine?" Heh heh, that guy rocks.

When Leeza finally gets home from playing the entire goddamn Wimbledon tournament, she finds Tom shampooing the carpet in the guest room wearing nothing but a speedo that says "Here's the buns" on the back and "Here's the meat" in front. On behalf of my eyes, I'd like to take this opportunity to say ow, my eyes. They get into a huge argument over whether or not the carpet needed cleaning, but Tom eventually wins by saying "Oh no! It was quite a mess. More than you'll ever know," and laughing in the most evil way possible. And yet, she doesn't question it. Tom and Leeza settle in to watch some TV, but the set is busted. Leeza resolves to call the repairman in the morning for some sex - I mean, so someone will come and pick it up. Oh wait, no, I mean for some sex.