The Case For: It has Scott Baio's brother, most of the annoying characters get killed.

The Case Against: Scott Baio's brother also wrote and produced, all of the characters are annoying. Also, a dance/cleaning scene that makes no sense.

Kids never learn. No matter how many times I tell them not to throw wild orgies in houses where children were brutally murdered, they do anyway. Then they all get killed and I have to watch a movie about it twice. It's a vicious cycle. It's also the best that Steven Baio could come up with in his desperate bid to impress his brother's girlfriends. Steven, who looks like like the lovechild of Scott Baio and Bronson Pinchot, stars in this sensible, grounded film of teen angst and thinly veiled homoeroticism, which he co-wrote with director Dominick Brascia. Brascia's father was one of the executive producers who gave this crap distribution facility the greenlight. And so, with a hearty dose of nepotism in their veins, the creative minds behind "Evil Laugh" embarked on a successful endeavor to make one of the most hilariously bad movies in history. How nice for them. 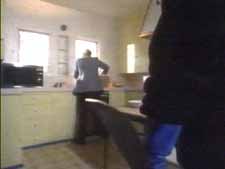 Look out, Jerry! He's got a knife! Jerry, watch out! Jerry... aw, screw it. Enjoy your stabbing.

The movie begins (that's the first mistake, right there) with a shot of a "For Lease" sign over which someone spraypainted "Stay Away." We are treated to the first of several dozen shots of the house, most of which are just to remind us that the location hasn't changed. An anal wart with a toupee, also known as real estate agent Mr. Burns, parks his car in the house's oddly massive parking lot/driveway and approaches the house. He is surprised by a delivery boy, who is delivering food for the house's new tenants. According to the delivery boy, the order contained monkey brains and calf hearts. Burns send him inside, ordering him not to touch anything. Just then, a car pull up. Mr. Burns goes back to the parking continent to meet Jerry, whose goal in life is to look as much a possible like Kiefer Sutherland with a heroin addiction. Jerry mentions in passing that he's a doctor, and that he invited some of his doctor friends up to the house for the weekend. Trying to make a sale, Burns tells him that the house is a perfect place for a group of young interns. Personally, I'm not sure what constitutes an intern-friendly location, but keep that little exchange in mind. We will only be reminded that the characters are doctors seventeen thousand, eight hundred forty-two more times. It has no bearing on the plot, per se, but it's very important all the same. Oh wait, it's not.

Burns takes credit for having some food delivered, even though Jerry was the one who placed the order. Jerry enters the house and shouts hello repeatedly, even though he has no reason to suspect that anyone, including the delivery boy, is there. He goes to the kitchen and examines the food that is laying around. Someone comes into the room. Jerry assume it's the delivery boy and gets upset over the lack of monkey brains. Apparently, the delivery boys Jerry is used to wear all black, creepy masks, and carry huge knives. Needless to say, Jerry gets the stabbing that frankly he had coming to him, even after being onscreen for a mere two minutes. Each time the killer stabs him, it makes the "Nintendo-age Mario jumping" sound, just like in real life. The killer cuts out Jerry's heart and puts it in a bowl. And then, out of nowhere comes the title screen! Booya! 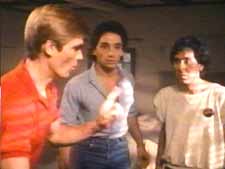 Mark tells Barney how many times he can have sex with him, while Johnny watches his dream of becoming the biggest Baio brother evaporate.

Some indescribably cheesy Eighties music plays over awkwardly angled shots of traffic, then it's a smooth (read: not smooth) transition to Barney, sitting on the side of the road by a broken down car. For the record, Barney is a self-hating closet homosexual and everyone seems to know it. Half of his dialogue - sadly enough, the good half - is either going out of his way to make fun of gay people, saying how many chicks he's going to score with (but never does), homoerotic innuendo, or about how much he loves cooking for company. In fact, this entire scene is pretty gosh darn flaming. For example, the first line, delivered by a musclebound blond man in cutoff shorts and no shirt, is "Barney, could you lower the jack so we can tighten the nuts?" It's repeated twice. And the car isn't even on a jack. Barney puts down his horror magazine - Brascia was hoping that seeing pictures of better horror movies would distract the audience long enough to not realize this is excrement - in order to complain about being asked to help, then he complains about complaining. In a flash of inspiration, he then complains about the car breaking down and about the trip taking too long. Mark, the big blond guy, tells him not to worry, he's going to drive fast enough to get them to their destination on time. Barney then complains that Mark drives too fast. That Barney, how can you possibly not love him? Meanwhile, shirtless guy #2, A.K.A. Johnny (Steven Baio) pees on some beefy, leatherclad biker's chest. Johnny runs back to the car, which is magically fixed, and after mentioning that they're all doctors thirty-nine times, the three friends speed off, giving the biker the "up yours" sign. Gayest scene ever. 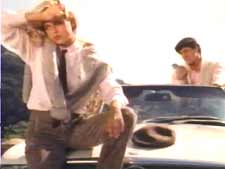 The incredible prepposity of this image cannot be measured by any means available to modern man.

Elsewhere, two young ladies are also having car troubles. Connie and Tina can't seem to fix their jeep, even though they're both doctors. You're right, being a doctor has absolutely nothing to do with fixing a jeep, but just try telling that to Steven Baio and Dominick Brascia. They'll just stick their fingers in their ears and sing showtunes. Connie, for future reference, is the smart one, whose job it is to become really creepy while describing murders in way too much detail later on. Tina is the slutty one whose job it is to provide enough cleavage for the rest of the class. Tina babbles about how she wouldn't have sex with Barney, but she would with Johnny and Mark, and, okay, she'd have sex with Barney, too. Then she fixes the jeep by slapping the dashboard in a manner that I fully believe was choreographed to show the most cleavage and make her breasts bounce as much as humanly possible.

Let's see, we've got the Scott Baio wannabe, the jock, the dork, the smart girl, and the whore. Now we bounce to the next two stereotypes, the preppies! Not just ordinary preppies, though. These are some sort of virulent strain of super-preppies. Sammy talk on his swanky Eighties-style car phone while sitting on the back of his Mercedes whilst his cap-doffing, pearl-wearing, blonde WASP girlfriend Betty checks her makeup in the mirror. They are preptastic. Sammy makes a few casual comments about how much more important his Mercedes is to him than Betty, and she takes his abuse without batting an eyelash. Sammy yammers on about how the house that they are all going to used to be an orphanage until some guy named Martin went crazy and killed everyone. Now, Jerry wants to reopen it. Oh, and Sammy and Betty are both doctors. See, everyone's a doctor? Get it? Doctors. Don't worry, I'll remind you later.

In a quick scene, we find the delivery boy tied to a chair in a completely dark room. The killer starts chuckling like a chain-smoking circus clown on nitrous oxide who's been punched in the throat one time too many. The delivery boy remarks, "Hey man, you've got a weird laugh." He's wrong, of course. The killer doesn't have a weird laugh. He has an evil laugh, hence the title. What a little dipshit. Barney, Mark, and Johnny are the first to arrive at the house. As soon as Barney walks in, he proclaims, "Honey, I'm home!" The other guys promptly banish him to the kitchen. Mark and Johnny hear strange whispers coming from the closet, but when they open the door, there's no one there. Just then, Burns appears. He makes a remarkably feeble attempt to explain the sounds, then asks them if they're really doctors. Odd, considering earlier he asserted that they were all a group of interns. Johnny tells him that in reality they're med students. So everything we've heard about being doctors was all bullshit. They're just students. Mark grabs Burns, approaches him menacingly, and tells him as threateningly as possible, "They call me young doctor Killdare." Why this intimidates Burns, I don't know. Probably because he's a big puss. Why Mark would want to intimidate Burns, I don't know. Probably because he's a big dumbass. In any event, Burns leaves and the mood inexplicably lightens. Johnny and Mark chatter about the house's various great attributes. "Hey, did you see the pool," Johnny asks. No, Johnny, and neither did you, because you haven't left the front hall yet. Figure that one out, doctor.