The Case For: The actors frequently get to show off their top-notch swordfighting technique, in which they have mastered the art of aiming only for the other guy's sword to make as many cool clanging noises as possible.

The Case Against: This was all set up to be a guilty-pleasure '80s action schlockfest, but the director took the "pleasure" part too literally and tried to crowbar uncomfortable sexual overtones into every nook and cranny, which really just leaves the "guilty" part. 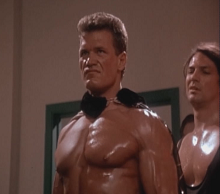 What the hell is this movie? The box art and nebulous plot summary promised us that some guy and his girlfriend would be kidnapped, and she would be chained to a rock to force him into some kind of over-the-top 80s underground gladiator arena combat tropefest. We would have killed for some over-the-top 80s underground gladiator combat. We were all ready to invite Haymaker and The Vein back to describe all of the impractical spiky leather armor, bizarre and functionally useless weapons, and parade of villainous opponents who are just walking showcases for steroid abuse and one particular crippling character flaw. But they would have had nothing to commentate on. We thought we were going to witness Arena but not in outer space, The Dungeonmaster with less sorcery but more goalie masks and iron spikes.

We were dead wrong.

We randomly scanned to the middle of the movie on Netflix and what do you know, it's a rape scene with repeated extreme zooms on the woman's face while her boyfriend is forced to watch. It's like somebody is trying to hijack the proceedings every few minutes and turn it into a serious documentary on underground sex trafficking, which somehow doesn't quite fit in with the guys in goofy post-apocalyptic chic outfits wailing on each other with fake swords. Oh, and also our hero's frigid girlfriend comes around to enjoying her sexual slavery and becomes Queen Slut of the Underground, which maybe knocks a couple more points off the human dignity meter for anyone involved in this nightmare.

In a lot of ways, sitting down to watch Legion of Iron feels more like joining a forensic investigation than watching a movie. Nobody can witness Legion of Iron without developing a morbid curiosity about just what the hell happened. Clearly the cast and crew have seen campy 80s action movies before, because they ripped off just about every single one ever made - but not well, mind you.

The heart and soul of any typical action B-movie is in the stereotypical, yet relatably human characters; the unlikely hero who overcomes all odds with his bravery, the innocent and good-natured girl he has to save, the cartoonishly villainous evil mastermind and their array of memorably one-dimensional minions. Legion of Iron has none of these. Here's what you get instead:

- An Eastern European steroid freak who looks like he probably owns and operates a hardcore weightlifting gym called "The Iron Curtain" - Johnny Everyteen, all-American high-school football star and his girlfriend, Alyson Chastity Icerella, who enjoys driving up to Makeout Point specifically to refuse to make out
- Lyle Wagner, token minority and gladiator bloodsport mentor, who enjoys pimping out his wife for the good of the people and taking 15 minutes and multiple gunshot and stab wounds before finally dying
- "Queen Diana", a cold, calculating dominatrix who ironically specializes in utterly humiliating herself with acting that ranges from "failed attempt to be sultry" to "yelling really loudly and incoherently".

...Clearly the cast and crew have seen cheesy 80s action movies before, because they ripped off most of them in one way or another. The whole "kidnapped against his will to compete in a bloodsport" thing is pretty obviously inspired by The Running Man, from which the "this rich playboy could be you, a winner of this totally legitimate competition who we set free and trusted not to tell anyone about it" contest-winner video shows up verbatim. The young, brash fighter being mentored by a grizzled veteran who trains him to take out the arrogant, intimidating champion is basically Rocky, or Star Wars, or a zillion other movies. And of course, let's not forget the desert jalopy gyrocopter explosion madness finale, which is definitely from...from...well, it was strongly reminiscent of similar scenes in The Dungeonmaster and Metalstorm, but we refuse to believe that anyone could ever sink low enough to crib from a Charlie Band movie.

Speaking of that last scene, we really have to spend some more time on that, because holy fuck, just look at it:

Just in case you had a minor stroke while watching that, let's just summarize the action: Billy and his girlfriend are making their escape in the stupidest Mad Max surplus vehicle they could find. Their evil captor Queen Diana takes exception to this, and pursues them in some sort of armed tricycle hang-glider (notice that bolting some wings on does not make your movie an exception to the rule that tricycles are the lamest and least threatening vehicles known to man). She has zero chance of actually hitting them with her pea shooter, but then Billy shows off his heroic instincts by flipping their car on the only rock anywhere for a hundred miles in any direction. Then, to prove that she can be just as dumb as any man, Diana takes her one and only advantage - being able to fucking fly - and pisses it away by zooming around a few inches off the ground, and gets thrown off her own stupid ride to death.

In conclusion, don't make the same mistake we did and watch Legion of Iron, ever. We know it looks campy and gratuitous and action-packed, but trust us, it's all an elaborate lie. There are only 3 fights in the actual arena, they're all terrible, and the protagonist isn't even in one of them. Fuck that.