We have yet another major superhero movie being released into cinemas this weekend and so we thought that after our review we would take a look back at some of the other movies starring that same superhero. Of course, the hero in question is Spider-Man as he appear in the sequel to the reboot.

EXPECTATIONS: So here we have yet another Spider-Man movie. The trailers look like they have been put together with footage from three different films of varying levels of interest to me. I think I'll buy one ticket to the one with an electrified Jamie Foxx whispering about killing Spider-Man.

REALITY: The Amazing Spider-Man 2 is so close to being good. There are moments of great cinema in here that are far better than anything in any superhero movie for years, but as a whole it is just such a confused mess that it ends up falling short. At 142 minutes, it suffers from the typical bloatedness that seems to afflict all modern Hollywood blockbusters and upon a single watch, it is readily apparent what could have been excised to make for a cleaner, leaner and ultimately better film. 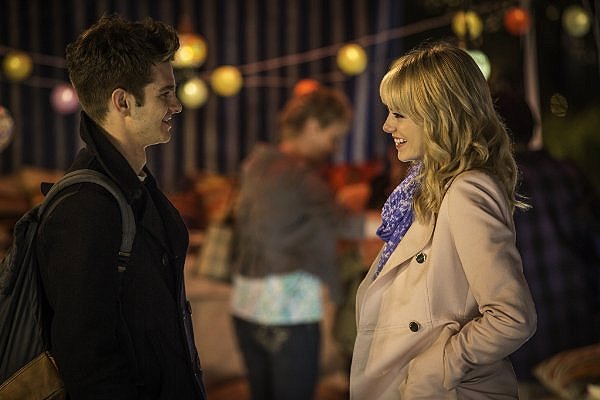 
After graduating high school, young couple Gwen Stacy (Emma Stone) and Peter Parker (Andrew Garfield) find themselves questioning whether or not their futures lay together as they each follow different paths. Gwen is about to leave for England for a scholarship at Oxford and Peter is busy repeatedly saving New York City from outlandish individuals by doing whatever a spider can. Enter Max Dillon (Jamie Foxx), a brilliant electrical engineer who is overlooked, ignored and forgotten by everyone in his life until he is saved from certain death by Spider-Man. The next day he is electrocuted and bitten by radioactive electric eels and becomes the super-powered Electro... Hold on... Let me try that one again...

The next day is Max Dillon's birthday and on that day he suffers a works accident that leaves him heavily electrocuted and bitten by radioactive electric eels...

On his birthday, Max Dillon is bitten repeatedly by radioactive electric eels... 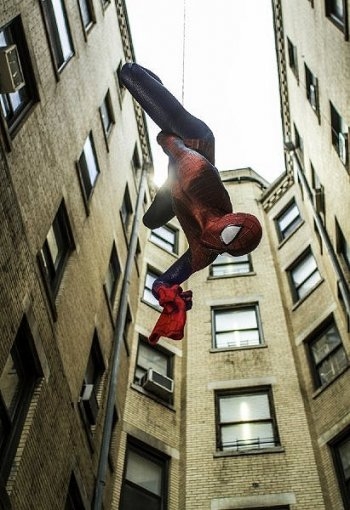 No, that whole scenario would have been a pretty good movie. The rift in the relationship as Gwen decides to leave and Peter feels that he can't because he is constantly needed in his city while Max aspires simply to be noticed in a cruel, uncaring world. Gwen feels that she has a responsibility to use her incredible intellect and scientific knowledge, Peter never forgets the words of his dead uncle Ben and feels that his unique powers give him an intrinsic responsibility to save all the lives that he can and Max feels no responsibility to anybody and this once harmless man uses his powers for purely selfish reasons.

This theme of the responsibility we have or feel is continued from the previous film and it's still a little muddled on the subject. During the opening sequence, Gwen makes a speech to her fellow high school graduates about not taking responsibility over the lives of others. That's fair enough on its own, but this is played over footage of Spider-Man saving a literal busload of people from death. Consider, too, that Max's entire tragic accident, becoming Electro and antagonising the city would not have come about had Spider-Man allowed him to die. While Peter/Spider-Man never actually takes on board this idea, the film does repeatedly question the audacity he must have in order to play with these people's fates. I'm not entirely sure why this is. If a rescue worker saves someone's life and that person then goes home and murders their family, do we blame the rescuer?

It seems like a strange venue to explore here, questioning the motives of someone who genuinely wants to help everyone. This seems to be a running theme throughout the Spider-Man movies, as though anyone who tries their hand at making one just can't bring themselves to agree with the main character's politics.


That said, most of the time Jamie Foxx is on screen is superb. The way he discovers and unleashes his powers is great cinema. His first confrontation with Spider-Man in Times Square is some of the best blockbuster filmmaking we've seen in a long time. So much is happening in that scene. We can't help but sympathise with Max, even as he becomes a threat. We understand his anger and his frustration and the realisation that now he is someone that nobody can ignore even if they try. This is played out when he is experimented upon by a crazy German scientist played my favourite overactor Marton Csokas.

Where this film falls completely flat, though, is in the forty-or-so minutes that should have ended up on the cutting room floor. This is where Harry Osborn (Dane DeHaan) comes into play. I think all of this, every part of the Harry Osborn plot, including the continuing mystery of Peter's parents, the extended story of the origin of the radioactive spiders (the eels are never explained; maybe in the next movie?) the schizophrenic nature of the Peter/Gwen relationship is a result of a late rewrite. Someone realised that you couldn't make a Spider-Man movie that was shorter than 120 minutes and didn't have lots of sad teenagers in it. It's hard being a teenager these days; all of their dads are dead. We need as much footage as possible of young people being sad, angry and confused about their dead dads or we can't really enjoy a man in red spandex blurting white stuff all over a blue Jamie Foxx. Even Foxes scenes take a considerable dip when Osborn goes completely off the rails. Of course this leads to some massive missteps that I won't spoil, but comic book fans will be able to guess at. You could have lost all of this and had an actually great Spider-Man movie. Ah, so close, and yet so far.

MINORITY REPORT: When Spider-Man robotically tells Max that he cares about him, and Max inevitably takes it the wrong way, I had to wonder if they cut out a whole subplot about Spider-Man taking a summer course in public relations. I assume he got an A in that class, because the last scene in the film is dynamite. - Joseph "Jay Dub" Wade