Overview: The heroic yet grimy Martian Communists (aka the Red Annoyance), led by stoic man of action Grant Rockblaster Jake Mason, square off with the mystical gypsy Space Bene'Jesserits and with the Galactic British Empire (the cool evil 19th century version) in the climactic Battle of Who Gives a Damn.

The Case For: Introduces the concept of planet-ism, which is like racism except for anyone who was born on Earth. Finally, somebody found a way to create equal-opportunity oppression for the rest of us.

The Case Against: Red Faction: Origins manages to create a dystopian future world so grim that being sentenced to hard labor in an actual gulag seems eminently preferable to finishing the movie by about minute 10. 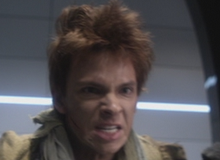 We all know that video game movies are always, always a great idea. So just try to imagine our surprise and delight when we happened across a DVD of Red Faction: Origins in some random backwater video store bargain bin one rainy Wednesday afternoon (do not actually try to imagine this). Full disclosure: the only thing we knew--or know now for that matter--about the Red Faction franchise is that it lets you and a few of your commie Martian pals run around with rocket launchers blasting yourselves 500 mile long spider holes through concrete walls to hide in until you all eventually realize no one's ever going to come out and kill yourselves out of boredom (which, incidentally, is remarkably similar to the Red Faction: Origins viewing experience, so maybe it's a pretty good adaptation).

So in other words, if you're looking for deep commentary about whatever dumb plot or characters are involved or how badly/unbadly this movie butchered the source material, you won't find it here. What you will find here is the shocking revelation that video games have actually made an even worse and dumber contribution to cinema than just loosely derivative video-game movies: reviews of video-game movies, written by actual video-game reviewers.

The endless glowing praise based mostly on information and insights that can be gleaned from reading the DVD case/having lived in the 20th century at some point should be familiar to anybody masochistic enough to read IGN game reviews regularly, not to mention the Aspergian attention to irrelevant technical details:

"The picture is solid and smooth, with decent detail and natural colors. The sound, presented in Dolby Digital 5.1 is on par with the video. It delivers the necessary audio cues without losing anything in the mix. There are even some moments in the action scenes when the surround channels come alive."

At least one nugget of truth managed to sneak past the editors at the very end though:

"Red Faction: Origins may just be one of the best video-game adaptations in recent memory. Although, admittedly, that's not saying much."

Hilarious though all of this is, you're not here to read some weird meta-review review parody, you're here for the inside scoop on Red Faction: Origins. Okay, you're probably not, which is good because like we said we weren't gonna give you any anyway. Glad we got that awkwardness out of the way! We wanted to say this movie should have been called John Carpenter's Moron Idiot Kings of Mars, but Red Faction: Origins is somehow too incoherent to even be a John Carpenter movie. It's also far too boring, since instead of Ice Cube blasting people with akimbo circular saw CGI pitbull Chris Tucker rocket launchers or James Woods shooting mutated nanite-augmented ghosts from his penis, you've got, well...

These Star Citizen ships just keep getting worse and worse :'{

Who would have thought that the flying jet coffin with no wings and a Lite-Brite for a circuit breaker would constantly almost crash and liquefy everyone onboard every 30 seconds? Just once we'd like to see a crappy movie spaceship where the CGI artist had the brains to realize that airplane wings are there for a good reason.