We cut to a parade somewhere, where the Dragons lead the Stingers on a chase through the crowds of people and down a few city blocks. The chase ends suddenly with no resolution and no explanation of why either gang was there in the first place. The scene is never mentioned again. I repeat, the filmmakers wasted untold amounts of time and money to organize an outdoor, on-location film shoot during a parade (I'm making the correct assumption that they didn't arrange the parade themselves), meaning they were on a strict timeframe and were counting on huge numbers of people, just so they could shoot a scene that is completely and utterly pointless. Wow. Back at the dojo, Jack forbids the kids from ever going after Cobra Khan directly. I guess he doesn't know that Cobra Khan is dead and gone, and only little Cubby remains. That's sort of odd, considering you'd think that if Cobra Khan died, White Dragon would have been among the first to know. Eh, whatever. There are much bigger plotholes than that to worry about.

You know what always helps to distract from those plotholes? Another training montage! The kids' first training sequence is repeated once again in lieu of actually filming anything new. It's just a setup for Damien's mother to come in, anyway. She comes to pick up Damien and bring Jack some cookies she baked for him out of the goodness of her heart, and not at all because she wants to have crazy sex with him. Through the magic of voice overs, Dave Eddy lets us hear what's going on inside the heads of Jack and Damien's mother as they exchange pleasantries. And just what sort of profound thoughts does the White Dragon have about this lovely woman? "Holy Buddha! Her hair is like a waterfall gleaming in the sunlight." For the record, no it isn't. She is so caught up in fantasizing about Jack's rippling muscles that she leaves without her son. At least, that's the reasoning I apply to the situation. One could argue that by the end of the scene, the writer simply forgot why he brought the character in in the first place. But I wouldn't want to imply this isn't a very good movie or anything.

Jack once again forbids the kids from pursuing Cobra Khan, and this time he even takes their masks away. However, Steve is able to smuggle his mask out of the dojo, as well as Damien's. He left Tanya's behind, but he insists that they don't need her anyway. You have to love the unity in this team. They're about to go up against a foe that their master insists is too powerful for al three of them to handle together, so Steve decides that they'll be fine with just two. Good reasoning, there, Steve-o. 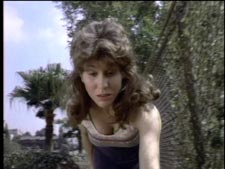 Meanwhile, two of the Stingers lure Damien's mother into a trap as she is walking somewhere. They actually attempt to snare her using the hundred dollar bill on a fishing line trick, pulling it just out of reach when she goes for it. Yes, I'm well aware that that only works in cartoons. To her credit, she actually doesn't go after to money. So the Stingers try again, but this time they put a page of coupons on the hook, and lo and behold, she chases after it. Sadly, the coupons get run over by a car, so that doesn't work. They finally get her by putting a topless photo of Jack on the hook. Comedy gold! Dave Eddy is sure to get plenty of shots of her butt and cleavage as she hunches over to chase after the picture, too. He's one class act, that Dave Eddy. The three kids see the Stingers capture Damien's mother (which is particularly impressive since only Steve and Damien were walking together), but they don't even try to stop them from getting away. When the Stingers are waving foam bats around, the kids can't stop them fast enough, but when a loved one is on the line, they just stand there and forget their lines. You just can't rely on this generation.

Now comes an exciting part: an entirely new montage! This time, it's just White Dragon practicing some moves. Alone. In the dark. For two and a half minutes. You can't buy that kind of action! Masked and ready to go, Steve and Damien invade the Stinger's home turf in order to save Damien's mother. The duke it out with the gang members in typical "Pocket Ninjas" fashion, which is to say, without using any actual martial arts and over some completely inappropriate music. At one point, I swear Steve actually bites someone's leg. There's nothing too wrong with that, except that he does so while wearing a mask that covers his entire face. There's one guy with a mullet that the two of them can't take out, but luckily, White Dragon shows up on the scene and spends a couple minutes dealing with this one random thug that has never been seen before in the movie. It's a little sad. After the thug is finally subdued, White Dragon removes the mask to reveal that it is actually Tanya there to save the day! Why she didn't come in her own damn mask and why Jack didn't come as White Dragon, I can't say. I'm sure it has something to do with mystical powers and codes of honor. Oh no, wait, it's probably because this movie sucks. And it's about to suck a whole lot harder. 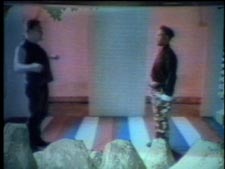 Two men acting out a video game. I almost want to kill myself on their behalf.

As all the thugs are taken into custody by the police, the narrator returns, which, in a better film, would signal the end of the story. It's a complete arc. Narrator at the very beginning, narrator at the very end, everybody's happy. But there's still one small loose end to be tied up. Remember Cubby Khan? He leads the dragons on a chase to a funhouse, finally stopping in a room with a strange looking machine. Rather than fight them head on, Cubby challenges the Dragons to face him one on one in a VR fighting video game. So that's what they do. I blame Satan. I'm serious, here, the fight that the entire movie has been leading up to with countless montages is settled in a video game. And in the VR world, the kids aren't even themselves. The game is represented by two adult actors fighting each other in really jerky, blocky motions that have been sped up about eight times. So while the kids are wearing VR gear and slowly waving at the air, two adult actors are visibly having their dignity sucked out of their bodies as they make fools of themselves trying to act like video game characters in a movie where even the real people fight by disco dancing and throwing balloons at one another. In the end, one of the Dragons - there's no way to be sure which - actually manages to beat Cubby Khan, which means... something. I can't tell you exactly what. The scene just ends. Cubby Khan's fate is never revealed. I swear to you, the scene just fucking ends right then and there.

We find ourselves back in the treehouse, where the three kids assess their situation. The badguys are defeated, I guess, but there's no reversing the damage that's been done by dumping that toxic waste. Tanya lectures her two friends on the dangers of pollution and how we all have to do our part for the environment. The end. No really, that's end of the movie. Yes, I know, I hate it too.

Reading over the plot as I just described it, even I have a hard time convincing myself that I'm talking about a real movie. It doesn't seem possible that one film could pump so much confusion into so little time. Whenever you think this movie can't sink any lower, just when you think it can only get better from here, it manages to pull out one more trick that makes you question just how human beings - creatures gifted with the capacity for rational thought - could ever have gotten together and actually produced this piece of crap. "Pocket Ninjas" leaves you feeling violated and empty inside, like the movie has actually crawled inside your mouth and hollowed out your brain so that it could just sit there, stinking up the inside of your skull like something the dog left on the carpet. This movie has no redeeming features whatsoever. Half the time the audio on the dialogue is too soft to hear what's being said, and when you can hear the dialogue, you wish you couldn't. The fight choreography in this movie is horrendous, even for a kid's movie. The acting alternates between the kids reading their lines from scripts positioned just out of the frame to the defeated performances by the adult actors who are all to aware that this is the last movie they'll ever do. As far as plot is concerned, this movie reaches levels of sheer idiocy that bring back flashbacks of "Nukie." And so help me God, if I ever see another montage again, something terrible is going to happen. My fondest desire is to find myself in a situation where I can actually pick up screenwriter Mark Williams and and use him as a projectile weapon with which to bludgeon Dave Eddy into a coma.