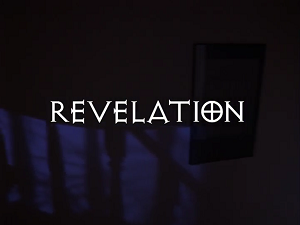 Overview: After the rapture, Satan's one-world army squares off with the Christian underground resistance movement known as The Haters (which is the best possible name for an underground resistance movement), who are trying to stop Satan's evil plot to suck everyone into his virtual reality world (think the Matrix as designed by the makers of Star Citizen on a shoestring budget.)

The Case For: If you're Christian, have no taste, and have a bumper sticker on your pickup truck that says "Warning: In event of rapture, this truck will have no driver", and you can't stand either Kirk Cameron or Nic Cage , then this movie is tailor-made for you.

The Case Against: If you're not Christian, watching this movie will probably not convert you, but it will make you feel embarrassed as hell and like a total dickweed for ever believing in anything again. I mean, it's not, like, Neil Breen bad or anything, but don't let your friends or loved ones catch you watching it because they might react like they walked in on you jerking off the family dog while dressed up like Superman.

Somehow, we just can't help ourselves from coming back again and again to the disturbingly well-represented genre of fundamentalist Christian post-rapture-apocalypse movies. We've seen all kinds of bad movies, but there's something uniquely terrible about the Jesus-freak end of the world fantasy movies.

On top of all the usual problems, movies like Revelation add on an extra layer of contradictory mental acrobatics, just to keep the whole Rapture premise together. Every time, there are basically three kinds of people left on Earth:

1) Satan's minions include lots of faceless soldiers and guys in suits with ridiculous eyebrows;


2) Non-believers, who are generally good people but didn't realize that the afterlife is a giant Monty Hall game and the real God was behind door number 2;

3) Devout Christians who are confusingly and much to their outrage still un-raptured, and so run around praying for everybody smugly and converting people in category #2, using various methods.

That last category is particularly confusing to us, especially in Revelation. Somehow we have a hard time that the kindly grandmother singing church hymns constantly wasn't devout enough to make the cut. Maybe she stuck up a convenience store in her youth? Shot a man in Reno, just to watch him die? Or could it be that this is a movie funded entirely by Christian ministries, and they're not going to make any movie that's nothing but heathens. (It's the last one.)

Now, as we all know, dystopia as a genre is traditionally used to project our deepest fears, social outrages, and manifest curmudgeonings onto an imaginary future-y wasteland full of glowy robots and rocket shoes. You know, to provoke thought, teach lessons, and what have you. Revelation, of course, does none of those things. Instead, it projects a mediocre image of moronic IT drones in Hawaiian shirts using Windows 95 to hack into www.Illuminati.com in hopes of bringing down the global atheist cabal and delivering their fun-hating Christian brethren from the chains of secular oppression via primitive VR goggles. It then takes that image and smears fistful after ample, nutty fistful of greasy, reeking human shit across it until it no longer resembles anything a reasonably well put-together human being could ever conceivably relate to or enjoy on any level.1

And so, inevitably, what starts out as a feeble but supposedly well-intentioned attempt at delivering some kind of moral message quickly devolves into the familiar persecution fetish circle-jerk about how white Christian guys with funky eyebrows are really the next embattled minority group to be systematically exterminated for their beliefs and culture. Usually this narrative involves some kind of delusional, trumped up horseshit about mass immolation squads sweeping neighborhood to neighborhood for shitty parables to prevent the poor ignorant masses from ever learning the sacred forbidden truth that "Good = Good, Evil = Bad". Revelation kicks all of this up a notch by having a father casually deliver his son to the local secret police detention center, because he caught him reading a Bible in his room.2

Speaking of unsettling eyebrows, the only actor you've ever heard of in Revelation is Jeff Fahey, a.k.a. Thorald Stone, which is a name just as manly as Mason Storm but attached to a man half as deserving. He starts out as some kind of detective working for Satan, but quickly becomes suspicious and joins the Christian underground resistance after being asked to spray down one too many pacifist tent revivals with hot lead. The resistance movement is officially known as The Haters, which is just so incredibly hilarious on its own that we don't even need to come up with any jokes about it. Exhibit A: 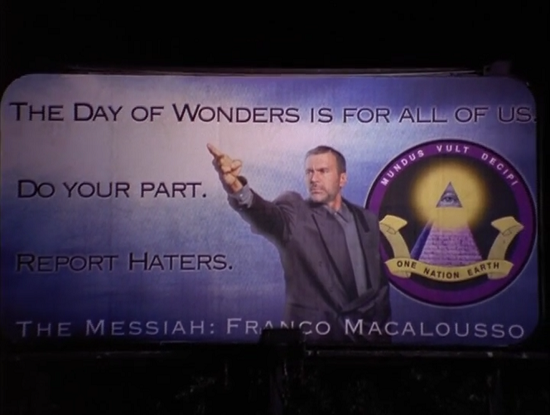 You may also notice that Lucifer The Messiah's official seal there reads "Mundus Vult Decepi", which we could write a whole ten-page treatise on re: the multiple layers of irony involved in having the villain in a Christian movie say that line, let alone spell it out on a fucking billboard for everyone to see. But we'll just let you google that and move on to the heart of the movie: computer hacking. The entire movie revolves around Satan's free giveaway of VR headsets for the Day of Wonders, but all of the time spent on morons hacking their way into virtual beach resorts just feels like a complete waste, because it's all completely supernatural anyway. For Christ's sake, an important plot point revolves around a blind woman putting on VR goggles which she can somehow see through, even before her sight is restored by selling her soul to the devil (a compact which is, of course, sealed with the traditional high-666.)

That brings us to the real moral of Revelation: disabled people can never be trusted. Seriously, out of all of the Haters (still funny), the two who turn on everyone else and join the forces of darkness are the blind lady and the guy in the wheelchair, because they can't resist the offer of being de-handicapped by Satan. We're not sure that was the intended moral lesson, but there it is. Oh, and they were also the only people who knew anything about computers, but don't worry: God's here to hack the Gibson and save the day. Yes, the action climax of Revelation involves a progress bar slowly filling up...through divine intervention. Okay, there's an equally amazing action climax where the Devil tricks a bunch of idiot Bible babies into wandering directly into a giant oven for the ultimate Death Schvitz, only to discover that God likes them too much to allow them to get Anne Frank'd to death (unlike those lousy Christ-killing Jews.) Yeah, turns out Satan's kind of a dumbass.

So there you have it, Revelation: a dubious allegorical romp through the anointed and eyeliner-tattooed brows of one Jeffrey Fahey. We're not really feeling swayed one way or the other on the whole Rapture thing, but there's one thing we're sure of down to our very souls after watching this: there are no Christian3 film schools.

[1] " Note: if the idea of this image appeals to and/or arouses you, you may be a Junior Art Buyer for the MOMA and therefore do not actually have a soul.

[2] "Please, dad, don't make me go to Satan Summer Camp! I wasn't reading the Bible, I was just listening to Goatraper's new album and jerking off, I swear!"

[3] Okay, we googled this joke and we have to make a pre-emptive retraction: there are no reputable Christian film schools.