Treasure of the Four Crowns 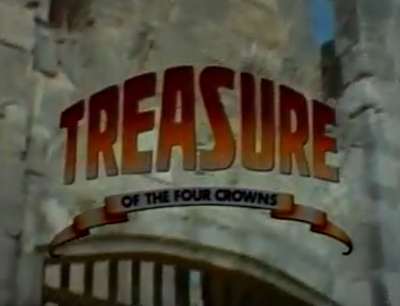 Overview: Italian Marty McFly risks life and limb against a fortified ninja monastery with an elite crew of ne’er do-wells, including a fat man with a mustache and an old clown prone to heart attacks.

The Case Against: Imagine your favorite heist movie. Got it? Now strip it of everything that made it work; the sleek, sexy cast, the clever misdirection, the snappy writing, the flashy, exotic gadgets, and the cohesive plot structure. That’s this movie. Also, the lead actor’s name is, literally, Tony Anthony (aka Tony Tony, aka Anthony Tony, aka Anthony Anthony, aka Nicky the Nose).

Naturally our first thought was that the man was roofied and dragged into a van immediately after asking what the movie was actually supposed to be about, or that this was part of some Italian government-sponsored illegal LSD mind control program, which we feel is well supported by the parts of the movie where it sounds like Ennio just got insanely high and is playing an extended theremin solo, but then the actual orchestra shows up, usually at the most inappropriate times possible:

Maybe they drew him in by just showing him all the close-ups of Italian unibrows and he assumed it was another spaghetti western.

Treasure of the Four Crowns is an insanely boring movie, but not in the usual meaning of “insanely boring”, i.e. “so ungodly boring that only a lunatic could sit through the whole thing” (we’ve been there before.) No, Treasure of the Four Crowns is almost lethally dull, but somehow it is at the same time one of the most outhouse ratshit, off-the-padded-walls spectacles you will ever wish you could unsee[1].

Sometimes, the most efficient way to mock a bad movie is just to describe its plot accurately from start to finish. This is not one of those times. The only way we can even attempt to convey the lunacy that is Treasure of the Four Crowns will be to jackknife wildly between seemingly unrelated characters and plot points, until somebody projectile vomits blood, bile, and hunks of organ matter all over their Italian anime wall scrolls. After all, as the Star Wars intro to this movie informs us without a hint of irony:

IN THE UNIVERSE THERE ARE THINGS

Let’s start with the cold, hard facts: lesser movie reviewers will try to chortle at the fact that “hurr, it’s called Treasure of the Four Crowns but there are only three!!” when it’s clearly explained by the windbag museum curator that the first crown was unwittingly destroyed by the Arabs in 1887, who tried to unlock its secrets without the magical key. Get your facts straight, idiots. Although we could see how one might be confused by the whole Four Crowns mythos, since only three of the four crowns actually contain unfathomable cosmic powers, while the fourth one is apparently the booby prize because it just has a little scroll inside that says something like “Better Luck Next Time” in Aramaic.

Another fact: Treasure of the Four Crowns is a wonder of ‘80s Italian knock-off cinematography[2]. The keen observer might notice that there are several scenes in this movie where objects exist for the sole purpose of being thrust towards the hapless viewer, including but not limited to:

A keen and cynical observer might make the connection that these scenes were done to cash in on that Super 3-D Vision that all the kids are raving about about at the skate park. A keen and cynical observer with internet access will go on to check the IMDB page and see that neither “Supervision” nor “Wondervision” are real, which will make their head hurt as they wonder why Ferdinando Baldi even bothered. Actually, seeing this movie might just lead you to believe that any sort of vision is a curse.

[2] Not to be confused with 80s knock-off Italian cinematography.