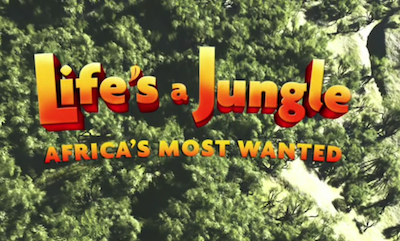 The Case For: There is no possible justification for the existence of this movie, except to fool confused near-sighted grandmothers trying to buy copies of Madagascar 3. Well, that and to be torn to shreds by unscrupulous comedy movie critics, but mostly the first thing.

The Case Against: So very many things, but let's go with the animation, which compares unfavorably to a bootleg Cambodian knockoff episode of Veggie Tales circa 2003. For a movie made in 2012.

The creators of Life's a Jungle are morally bankrupt, creatively bankrupt, and we hope to God regular bankrupt by now too, after having the gall to release this catastrophe onto an unsuspecting public. Their sales and marketing plan seems to have consisted entirely of giving it the subtitle "Africa's Most Wanted" and praying that some clueless Barnes and Noble drone would stock it next to copies of Madagascar 3 in the kids' section. Fortunately, this seems to have been the final, merciful nail in the coffin for both the production company and writer/director/voice actor Robert D. Hanna1, so for once our prayers to the movie gods have actually been answered.

Comparing this movie to a fever dream would be like trying to explain drowning by analogy to drinking a cool, refreshing glass of water. No human being with even the most superficial experience in social interaction could ever dream up something as disturbingly, mind-bendingly unreal as the action and dialogue in Life's A Jungle. Any and every line of dialogue is like being brutally kicked in the solar plexus, interspersed with wooden, stilted poses; long, pregnant pauses; and frequent, explosive bouts of spastic dance numbers accompanied by the smooth, ear-soiling ethnic percussion overtones of #387 - Vaguely Racist Jungle Xylophone from some cheap knockoff Casio's MIDI instrument-patch-wheel road to ruin. Oh, and so many fart noises that all inappropriate fart-based humor will be ruined forever if you're stupid enough to watch this.

The "star" of this debacle is Pip the dog, who (coincidentally?) sounds exactly like Pip from South Park, but is exponentially mincier and more high-maintenance. Pip is so foppish that he literally lives in a mansion and gets hand-fed giant bowls of caviar with a silver spoon by New England WASPs. This could be an ideal setup for your classic fish-out-of-water tale when he's dumped into the jungle and forced to survive for the first time in his life, but since nobody with a sixth-grade education or up was involved in this shit show, Pip just skips all of the character development and goes straight to becoming a bamboo-based civil engineer and one-dog matchmaking service for a herd of testosterone-riddled rhinos whose hobbies include pissing all over everything and, well...that's about it, actually. We'd say "and then laughter ensues", but we sure as hell didn't laugh, possibly because our souls had already been totally destroyed by the haunting glassy-eyed stares of the assorted monstrosities in Life's a Jungle.

Speaking of which, let's meet the rest of the animal kingdom roster! We already covered the rhinos, who (as we all know) are the undisputed kings and apex predators of the jungle, as well as just being colossal dicks to everyone due to their tragic inability to score with female rhinos. Rounding out the cast are Flash the sloth, who is really slow, because that's just hysterical2; Loo the crane, who for some insane fucking reason sounds exactly like a grizzled gold prospector from the 1870s; and Artie the anteater, whose personality consists of the words HANG TEN DUDE, COWABUNGA RADICAL!

This is where we'd usually make some attempt to summarize the plot after much complaining, but there's nothing to summarize this time. Life's a Jungle isn't a movie so much as a fucked up acid-trip nature documentary of an alternate-universe Africa which exists entirely on a rusty Commodore 64. In fact, the movie is vastly improved if you just start to imagine Sir David Attenborough narrating over it3: "Ah yes, the majestic New England Mincing Terrier. He has a symbiotic drinking relationship with many other fascinating jungle creatures, such as the Lesser Dead-Eyed Aardvark and the Bolivian Retarded Toucan-Crane. Let's watch as they have a tropical jungle luau dance party."

In short, every aspect of Life's a Jungle is a crime against humanity. We're not even kidding - every single one. If you were actually deranged and sadistic enough to show this to your kids, they'd be calling social services before the first half hour's up. Everything is so painfully weird, disturbingly twisted and bafflingly stilted that it almost manages to cross the line into 'wannabe arthouse horror movie' territory.

Hmm...that gives us an idea:

[1] Tragically, our eternal nemeses Phase 4 Films survived to distribute crap another day, but Life's a Jungle must have hurt them at least.

[2] You might be tempted to accuse Zootopia of ripping off Life's a Jungle at this point, but that's impossible because nobody involved in computer animation could see Life's a Jungle without immediately quitting the field and/or breaking their own hands as a precaution.

[3] At gunpoint, obviously. Suspension of disbelief can only go so far.