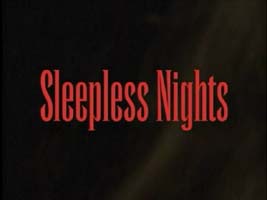 The Case For: There is one absolutely fantastic moment involving a baby in a refrigerator.

The Case Against: These have got to be the pussiest vampires in the history of cinema. 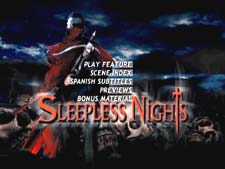 Sadly, Vincent is not the only thing this movie has stolen from the Final Fantasy series.

I love vampire movies. Well, okay, that's not really true. I love vampires. Vampire movies usually suck. Nonetheless, being the happy-go-lucky idiot that I am, I can never stop myself from renting every new vampire flick that hits the shelves. When I saw the cover art of "Sleepless Nights," I knew right then and there that I had to rent it. "Oh man," said I. "That looks pretty freaking cool!" The art in question can be seen at right (minus the DVD menu options). Check out that imposing figure with his red cloak that shields half his face and his sunglasses that totally obscure his eyes. Man is he badass. It wasn't until I got home, popped the movie into my DVD player, and realized that I wouldn't be seeing anything even remotely that cool in the next hour and a half that it finally occurred to me that the reason the figure on the box looks so badass is because he's a direct rip-off of Vincent Valentine from Final Fantasy VII. "Well," thought I. "That doesn't bode well." And indeed it did not. The movie turned out to be a dull mush of cliches and wooden acting. And what makes it worse is the "Making Of" featurette on the DVD. There's always the hope with movies this bad that the cast and crew knew they were making crap all the way through. Hey, maybe they even set out with the intention of making crap! But that is not the case with "Sleepless Nights." Writer/Director William Hopkins actually takes himself completely seriously. He wanted this script to become a big budget Hollywood release and was originally dead set against producing it on such a tiny budget with a digital camera. Admittedly, it would have been better with a bigger budget, but hey, "Feeders" would have been better with a bigger budget. It doesn't change the fact that the script was still terrible to begin with. Sorry, Hopkins, but this movie was doomed the minute you started. 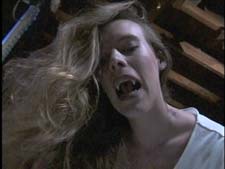 The story begins ten years ago, as we find Christian Grey, a hunky guy with a hunky name, a hunky cut on his face, and a hunky appetite for a hunky cereal, whittling stakes. His partner in the ever-expanding field of vampire execution, the slightly older and less hunky Jacob Sloane, enters and the two men talk about the hunt. Specifically, there's a hunt. They do it. The hunting, that is. Jacob shuffles off to go be useless elsewhere, and Allison, Grey's wife enters. Grey tells her that they're closing in on Lord Malgaard, a vampire who is "smarter than most, and more ruthless" and also has a particularly stupid sounding name. Allison seems normal enough at first, but when Grey touches her neck, his fingers come away stained with blood. Then she suddenly starts talking like a character out of a bad Victorian novel, which is a clear sign that someone is a vampire. The fangs are a decent indicator, too. She tells Grey that Malgaard came and drank her blood, then made her drink from him, binding her to him. I guess this happened within the last few minutes, since the blood is still fresh and wet on her neck. But then again, we find out later in the movie that once a vampire drains all of your blood, you stay dead for a full day before rising as a vampire, so Malgaard couldn't have been there within the last twenty-four hours, so maybe this movie just sucks. In any event, Allison shows the usual self-restraint that all vampires in all crappy vampire movies show when confronting a loved one and immediately goes for Grey's throat.

Grey wakes up suddenly. He had been dreaming. But this is not the Grey we are vaguely familiar with. No, now his skin is pale and his hair is immaculate - in other words, he's a vampire. His slow, monotonous narration fills us in on the fact that ten years have passed since that fateful night. Oh, if only he had known that being one of two guys in the vampire hunting business might have had such dangerous consequences! 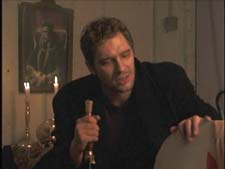 This is our bad guy, ladies and gentlemen. Sorry.

At some garage, Dr. Hogarth (the quality names just keep on coming), a bearded man in a suit, gets out of a big black car and is met by a long-haired punk with a snake around his neck. The snake guy brings Hogarth into the garage, where he finds himself surrounded by vampires. The atmosphere is underscored by what sounds like a sampling of the opera midi from Final Fantasy III (the male part, not the part where you can make Celes screw up the entire performance). Their ringleader, a man named Stritch (see?) greets him, and has him escorted away to prepare for a ceremony. Stritch goes to find the leader of the vampires - you guessed it, Lord Malgaard himself. When Stritch enters the room, Malgaard is fiddling with a cheapass sword and shield that the props department probably made with cardboard and a little housepaint. He tells Stritch that he used to be a templar, and then he just stops. It really seems like he's about to tell a story or make some sort of point about how much or how little has changed since those days. But no, he just sort of stops talking. It's the perfect combination of bad writing and bad acting that leaves the audience with a general feeling of "huh?"

After a nice awkward pause, Malgaard and Stritch go to join Dr. Hogarth and the other vampires. Apparently preparing for the ceremony really only consisted of putting on a white robe. Malgaard drones on for a while about how he and Hogarth had a deal - Hogarth provides him with an ancient amulet that makes him immune to the sunlight and Malgaard makes him a vampire. However, the good doctor doesn't have the amulet quite yet. Malgaard explains that if he made Hogarth a vampire now, when he got the amulet he could use it to gain power for himself, so he has to die. Theoretically, he could just make Hogarth a vampire in a week when he gets the amulet, but then he couldn't pretend to have some flimsy justification for killing him! Malgaard swings his sword in the dumbest fashion possible and takes Hogarth's head off. Well, he takes an incredibly fake looking dummy's head off, at least.The point is, I don't care if he has super strength, there's no way a wimpy slash like that would actually slice through flesh, muscle, bone and cartilage. Not that I'm saying Malgaard does have super strength. In fact, there's very little in this movie to suggest that the vampires have any sort of power whatsoever. 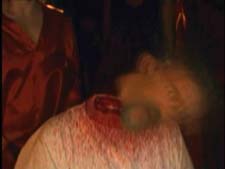 Oh no! My mannequin!

It turns out that Dr. Hogarth was not just some random amulet collector. He was a multimillionaire who made his fortune selling self-help books to incoming members of the church he founded, the Church of the Future. In other words, he was a complete rip-off of L. Ron Hubbard. Malgaard plans to assume control of the Church of the Future, but first, he and his vampire buddies party hard by filling their glasses with blood, then drinking and making panting sounds. I'm sorry, I just can't muster any respect for the undead when they get winded from drinking. Suddenly, the revelry is interrupted by a bunch of human agents armed with crossbows and stakes, which draws a look of pure, unadulterated stupidity from one of the vampires. Here's another clue that these vampires aren't quite as much of a threat as they're made out to be: the humans kill every single one of them without sustaining any injuries. Only Malgaard and Stritch escape. Seriously, there is a room full of vampires, and none of them can manage to even nick a single human. Those are some pussy-ass vampires, right there. And since when do vampires die the second you shoot them with a crossbow? We never get a decent explanation, there. I mean, I understand that if you put a wooden arrow through the heart, it's the same thing as a wooden stake, but do you have any idea how hard it is to hit the heart dead-on? Every time one of the humans shoots, a vampire drops. Now either these agents are the best crossbow artists in history or these vampires are really goddamn weak. 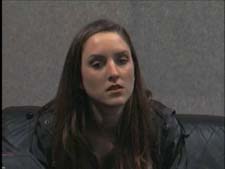 Careful, Katlin, you're almost showing an emotion, there.

William Hopkins is so ashamed of his own vampires at this point that he shifts focus to the humans for a while. Katlin Moore sits at her desk in the middle of the headquarters of whatever agency is in charge of vampire hunting these days. Her boyfriend and fellow agent, Jeff comes over for a leisurely chat about bite patterns. Katlin mentions she's tracking a vampire code named N-5 who has been following Malgaard across the country, but who always leaves his victims alive. Sadly, their romantic pillow talk is interrupted by a visit from the head of the agency, Jacob Sloane. Yes, Sloane is still hunting bloodsuckers, and the past ten years have not been kind to him. He's somehow managed to age at least twenty years and develop a need for both huge glasses and a cane. He chastises Katlin for not wanting to destroy N-5 simply because he doesn't kill people, and also for missing an appointment with the the agency physician. Sloane obviously has nothing better to do than meddle in the personal affairs of low-level pencil pushers. And why wouldn't he? After all, he's just head of a government agency that just raided a building and killed easily a dozen vampires. It's not like he'd have any work of his own to be doing. The entire scene serves to give the audience a better introduction to the agency and to point out that working for this agency apparently causes people to lose the ability to move the upper half of their faces. It also introduces the term "necromorph," which is what the agency calls vampires. "Necromorph." You like that? Try it out. Roll it around on your tongue. Now say it a few hundred times in succession in precisely the same tone. Hooray, you've just reenacted this entire scene! Congratulations! Now go pray for forgiveness from the gods of halfway decent movies!