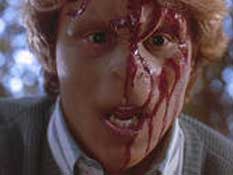 The mutant cat-boy is enraged when a hotdog-eating contest goes horribly, yet wackily, awry.The police begin to show up outside, complete with 5-dollar spinning lights they stole from Radio Shack on the tops of their cars. The mutant cat-mother and the fleeing girl run outside, upon which the mutant cat-mother impales a police officer on a fence and does a great deal of yelling about her son, her only son, oh no, her only son, they will pay, he was her only son, her only evil mutant cat-person son! The 10 billion stray cats in her yard are suddenly enraged by the presence of an evil mutant cat-person in their hood, so they attack the evil mutant cat-mother en masse, causing cheap roadside fireworks to shoot out of her various skin pores. Her rubber mutant cat-mother suit eventually catches on fire and the girl huddles in the police car watching the inferno that was the mutant cat-mother burn like a Roman Candle. The girl looks to her right, and lo and behold, there is Clovis the cat! Remember good ol' Clovis? Deputy Cat? Protector of virgin girls and enemy of evil mutant-cat people everywhere? The movie ends with her insightful and touching line, "It's just you and me now, Clovis." This is where you're supposed to either watch the credits float up the screen or finally pull the trigger, whichever you decide.

If you haven't gathered it by the plot summary, I will conveniently sum it up for you: this movie is terrible. What amazes me the most is that when doing research for this article I was stunned to read that some of the reviews of it were positive, even glowing. The most shocking of these was from Time.com, which wrote,

"Vampires have a certain sad majesty, and so do these Sleepwalkers: half man, half cat. Their genetic code condemns them to dine on the living; their incestuous passion is strong enough to raise the dead. In their solitude they are like any child who feels alien from his classmates, or any fortyish office worker who feels life draining away. They are the creatures we see in the mirror on our darkest nights."

What the fuck? Were they watching the same movie that I was watching? Did Stephen King personally hand out large quantities of narcotics during their special screening? And if so, how much money or how many subscriptions to 'Guns and Ammo' did it take to purchase Time's journalistic integrity? Whatever it was, it had to have been astronomical, surely more than the $48 budget it took to produce this film.

Another scary fact is that some lunatic out there saw fit to give this movie an award... two in fact! One for visual effects and computer animation (guhhh?) and another for 'animal wrangling.' This person is one Chrystfferssen Maakorey of (this is not made-up) "Gaiboy Entertainment and Fennec Productions," who has been bestowing the coveted "Fennecus Award" on lucky films and their actors, directors, etc. since 1981. Gaiboy Entertainment. Gaiboy. GAIBOY.

The third and probably most frightening aspect of this film is the sheer amount of money it made at the box office. Sure it was no "Biodome," but as mentioned above, "Sleepwalkers" managed to pull in over 28 million dollars. Just for the sake of reference, here are various other things that cost 28 million dollars:

That's a lot of money to spend at a movie whose only claim to fame is that it was written by that one guy who wrote those other shitty movies and those boring books that contain 400-page descriptions of abandoned office buildings. Maybe the American moviegoing public was a lot more gullible back in good ol' 1992, but judging from the box office gross of over 79 million dollars from the zany geriatric hit "Space Cowboys" in which they shoot Tommy Lee Jones off to the moon to die because he has cancer and is constantly depressing them, things haven't gotten much better. I just don't know if I want to live in a time and place where things like this routinely happen. The only reassurance I have, the only reason I have not plunged into the nearest deep lake to die a horrible lonely death in said deep lake, is that the Carrot-top movie "Chairman of the Board" only grossed a bit over $300,000 in its entire box-office run. That's reason to keep on living as far as I'm concerned. That and all those stray cats in my yard protecting me from the evil mutant cat-people.