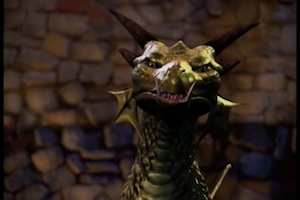 So far, what we're describing probably just sounds like a mediocre and unremarkable kids' movie, but of course that's precisely the Canarom formula; the first half-hour or so lulls you into a false sense of security, and then the rails come off. Teen Sorcery isn't quite as gregariously ludicrous as Shapeshifter, but there's still no shortage of arbitrary rules, insane exposition, and plot holes big enough to hold a marathon witch-burning and general inquisition session in, something which would really have brightened up the events of Teen Sorcery, by the way, but no dice.

Following what feels like months of low-level magical prank war, Mercedes finally comes to the shocking realization that she can actually use her sinister powers to take Dawn out, instead of just scowling and walking away in a huff every time. Reaching into her big grab bag of magical ailments which are easy on the special effects budget and the writers' imagination, Mercedes comes up with the spell of eternal slumber, which promptly puts Dawn into a coma. Dawn's three friends immediately respond by panicking and trying a bunch of increasingly stupid things to wake her up, none of which seem to include actually asking the magic fucking amulet to do it.

At this point the movie undergoes a smooth and seamless transition into just ripping off Sleeping Beauty, because Satan requires extreme amounts of plagiarism to power his unholy geas. Plus for flavor there's also some Sliders escapades involving a medieval castle, a world where hippies evolved from men, and of course the ever-popular Planet of the Nerds. But mostly just Sleeping Beauty.

Of course, every Sleeping Beauty story needs a prince, and Teen Sorcery delivers in the form of Michael Charming (ugh), who spends the first half of the movie fainting in bio class, being repeatedly shot down by Dawn, and showing up to a costume party in an outfit so astronomically ugly that it must have taken a team of master tailors months to construct it. Not that he does all that much better in the second half, mind you, even if he does technically save the day.

Before he can wake Dawn back up with a clammy, hesitant kiss, there's the little matter of the climactic battle with Mercedes, whose great reward for combining both amulets together is turning into a quadriplegic dragon with no magical powers and a reaction time that's at least a solid three seconds. Satan sure does have a sense of humor about rewarding his loyal servants. As you can imagine it's not much of a fight, although it does involve a giant plastic egg full of sleeping medicine that he somehow pulls out of his ass (not literally, we hope.)

Does Teen Sorcery live up to the utter madness of Shapeshifter? Sadly, no. It's still pretty spectacularly terrible, though. The child actors are generally not bad, but everyone else is hamming the everloving shit out of every word of dialogue. And the soundtrack exclusively provided by a Canadian basement-dweller with a copy of Fruity Loops and the Romanian National Whimsical Oompah Band will not help to reduce the growing headache you'll get from trying to follow the plot. Fuck it, two down and four to go.