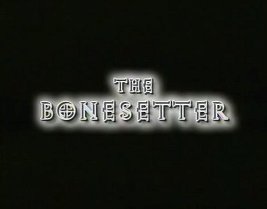 The Case For: It's short.

The Case Against: This is the worst movie I have ever seen. Is it the worst movie ever made? I don't know, because I'm not God. But I do know God doesn't exist because He would never let this movie be filmed. So not only is "The Bonesetter" utterly devoid of merit on any level imaginable but it killed God. 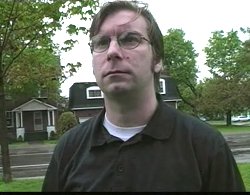 Our hero, Kyle. No, fuck that, he's not my hero, he's your hero. What, you don't want him either? Fine, he's no one's hero, we all hate him."The Bonesetter" is both an extreme example and a perfectly representative example of the basest sort of cinematic bullshit I'm forced to wade through in my masochistic pursuit of terrible movies. Nothing about it is in the least portion interesting or evocative or thought provoking or even marginally entertaining. Why do these sorts of movies continue to be made? I may decry horrible movies left and right but if something has Coolio dressed up as a vampire threatening to masturbate on a police android, there's bound to be somebody on God's green earth who can find some small amount of entertainment in that image. But stop me if you've heard this before: a supernatural villain is terrorizing a small community and it's up to an unlikely hero to defeat it and save the day. If you're not enthralled at the prospect, congratulations at having an IQ somewhere north of a sugar beet. "The Bonesetter" doesn't make me want to track down more movies by the director, it just makes me want to die.

Why? Why are movies like this made? Fine, the creators have no money. That's fair, I have no money either, and yet I can state with adamantine certainty that I am better and more worthy than them. And not just figuratively either; if I was led to the slave auction block alongside everyone involved with the creation of "The Bonesetter" it's not even a question of whether or not I would fetch more money, because the entire cast and crew would have had been branded with enormous intricate Bonesetter logos indicating their uselessness for anything more complex than being dismembered and served to pigs. Why must being a low budget indie film translate into a worthless plot filled with worthless characters who act with the realistic intensity of someone who is most concerned with not looking directly at the camera? Is there something in the water? Do only the stupid people insist on actually going through with these travesties, and anyone with an iota of sense calls it quits long before their embarrassment is transferred to DVD for the world to revile? 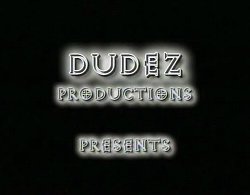 "Dudez Productions"? Why am I even bothering? If I was starting a production company at the age of seven I would have scrawled down "Dudez" as a possible company name before shaking my oversized head and dismissing it out as too "sophomoric." Actually I would probably use the word "poopy".Low budget movie maestro Brett Kelly decided that writing and directing "The Bonesetter" wasn't enough for him and he had to complete the shit trifecta by playing the lead character as well. This is actually a welcome step because at least it dispels any notions a person might have right off the bat of being any sort of worthy effort. A real actor playing the starring role of Kyle would just lend some small degree of respectability to the proceedings so I suppose in that sense I should thank Brett Kelly for deciding to grace it with his hideously ugly presence. This is past normal low budget ugly, past fat Jedi fighting fat Sith in the forest Star Wars fanfilm ugly, but the sort of ugly that immediately alerts the viewer that not only is the lead actor amazingly unattractive, but is in fact unattractive to such an incredible degree that he must also be directing the movie, which means that he must be an idiot for wanting to making a movie starring someone so ugly, which means the movie is going to be horrible and they should turn off the DVD and watch something more fulfilling like "The Gong Show" reruns. Taken in such a manner, it could be argued that the lead actor in "The Bonesetter" being a disgusting oaf is actually a plus. This should help you realize what sort of a movie is being discussed here.

At least the director had some vague, gauzy impression that he wasn't classical leading man material since his character starts out as a nerd who works in a library and makes horrible jokes about people using the internet. I say "starts out" because despite the fact that his character's introduction shows him being rescued by his sister from some guffawing bullies who are even fatter and uglier than he is, he still manages to end the movie as some sort of hero, despite no explanations of any changes in his character whatsoever. Somehow he manages to get the girl even though his face makes children cry. It just makes no sense.