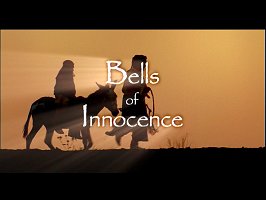 Overview: "Bells of Innocence" is a good Christian film, in that it includes a hero who attempts suicide onscreen, an angel who is a total asshole, and a little girl who murders people. So in other words, it's not really a Christian film at all, and so none of the confusing plot twists make any damn sense because you can't just say Jesus did it.

The Case For: If you hate Chuck Norris, you can watch this and see just what he's been reduced to.

The Case Against: Chuck Norris doesnt bust out any karate moves on anyone. OK, I get that he's old, but what the fuck, he's not an actor because of his dramatic talents. Oh and also the movie is absolutely horrible. 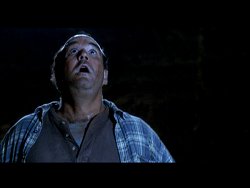 Just your average Depression-era Joe.Ever since Time Changer I've been wanting to return to the world of stupid Christian films. Unfortunately I was sidetracked by a lot of crap about zombies and vampires, not to mention strangely obscene emails written by people of faith, suggesting I perform acts that I am pretty sure are so mortally sinful they would literally make the ground rip open and pull me down into Hell right then and there. But when I came across "Bells of Innocence," it had the perfect combination of Christian morals and old washed-up martial artists that ensured I would get to see something very special, if by "special" you are trying to avoid hurting this movie's feelings, because it is legally retarded.

The movie opens outside "Ceres, Texas" in 1932, where a white man and his white grandson are tending to a nighttime fire. Despite obviously being white as the driven snow, the two are dressed in full stereotypical Plains Indian attire, possibly because they sneezed upwind of an Indian village and three days later collected the belongings after all the Indians died of the common cold. As the grandfather and grandson stoke the fire, suddenly torches appear in the distance and a man dressed in blatantly modern-day clothes stumbles up to them, scared out of his mind. I honestly thought that maybe the man had traveled through time, but as nothing of the sort is ever implied again, I can only assume that dressing a 1930's character in a plaid shirt and jeans was done by the director as a test of Christian faith, just like so-called dinosaur bones. The man starts screaming about bells and warns the kid to run, because his Indian costume is so convincing that the white mob would just kill him anyway. As the kid runs off, the mobs catches up with the grandfather and kills him, while the man in the plaid shirt is struck by lighting for no apparent reason. Luckily, watching a man be turned into a human fulgurite distracts the mob, and the child manages to escape to safety when he comes upon a man on horseback whose stilted, lifeless dialog sounds suspiciously like that of Chuck Norris.

The movie cuts to the present day, where a pastor addresses his church congregation, explaining how three of its members are going to be delivering bibles to a small Mexican town. The fact that a Protestant church delivering Protestant bibles to a Catholic community makes no sense seems not to faze anyone, which I can only attribute to the assumption that the bibles are simply a cover story for a massive heroin ring. Unfortunately, as this is a Christian movie, that remains only a theory. The pastor introduces two of the three: "Conrad," a square-jawed, heavy-browed model Christian soldier, and "Oren," a fat, pasty whining idiot, casted to cater to the fat whiny Christian demographic.

The third man going on the trip, "Jux" or possibly "Jax" or "Jox" depending on which character is pronouncing his bizarre name at any given time, is not such a great Christian because instead of attending church, he is at home sprawled out on his bed. As he stares at the ceiling, dramatic music plays and there's a sepia-toned flashback showing Jux in happier times, out playing in a park with his young daughter. "Playing" apparently means something a little different in a Christian movie because there's a quick shot of his daughter hugging him before Jux shoves her bike towards a busy street, where she is immediately creamed by a passing car. Maybe all Christians teach their children to ride a bike by forcing them to react to a certain death, I don't know. It would make sense considering the very first thing a newly baptized child has to do is avoid drowning. 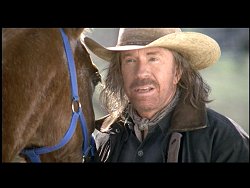 Chuck Norris plays a quiet, spiritually driven Texas cowboy in his greatest acting stretch yet.As the three survey their surroundings they see nothing but vast stretches of dirt, so they do the sensible thing and start walking in random directions. They hike for hours, the silence occasionally interrupted by Oren's whines that he is tired, or thirsty, or hungry, or that his feet hurt. As they wander the wasteland, the camera pans to show Chuck Norris on horseback, watching them from behind a rock. He doesn't reveal himself or offer any sort of assistance to the stranded men, because he is an asshole. Eventually the three lost souls hear bells ringing and make their way to a small town which looks suspiciously like an "Experience the Old West" tourist destination. A sign says "Ceres, Texas," telling us that this is the same place where 60 years before, an angry mob chased a guy who got struck by lightning. There was probably supposed to be some more ominous message intended, but it got obscured by the fact that the movie sucks.