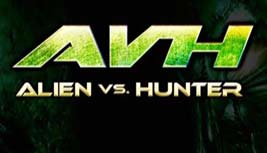 Overview: A group of inept humans are caught game of really-slow-cat-and-mouse when two aliens crash land on Earth.

The Case For: Makes Alien vs. Predator seem thoughtful and fresh.

The Case Against: When a movie makes me think fondly of Alien vs. Predator, something is very, very wrong.

I don't begrudge the Global Asylum production company for its bizarre function in society. They make low-budget versions of big-budget blockbusters, films like Snakes on a Train, Pirates of Treasure Island, The Da Vinci Treasure, and the upcoming 100 Million BC. I don't understand what motivates them myself - it seems like anybody who would be interested in seeing one of those movies could probably get their hands on the real thing with greater ease - but Asylum's numerous films have provided the occasional thrill, and they seem to enjoy their work. Sadly, in the last couple years, Asylum's films have taken a turn from low-budget but fun to just plain awful. Alien vs. Hunter falls into the latter category.

I have a love/hate relationship with the real Alien series, which I think is precisely what its creators intended. I love those movies - well, the first two, anyway - for their astounding combination of suspense, action, black comedy, and shit-your-pants horror. I remember seeing Aliens for the first time as a young child and then contracting a stomach flu a few days later. Naturally, I thought that the pains in my stomach were the first scratches and gnaws of a growing baby alien that would soon burst out of my abdomen and eat my family. Even more naturally, I was right, and my alien gut-baby and I are now the best of friends, although I do occasionally miss my family. As for the Predator series, well, let's just say that if you were to tell me to get to the choppah, I'd be more than happy to respond with a knowing wink and a half-sincere chuckle.

So, like most fans of those two iconic series, I felt incredibly betrayed by the bubbling cauldron of suck that was Alien vs. Predator. Maybe there was no way that movie could have lived up to its mammoth potential, given the impossibly high expectations of fans who had been clamoring for these two unforgettable movie monsters to rip each other to pieces for years, but AVP didn't even try. Considering AVP's universally frosty reception by critics and fans alike, one would think that there would be nothing to gain from making a movie that approaches the same basic premise, only with a much smaller budget. The only way to make it a worthwhile endeavor would be to set up a story so pulse-pounding, filled with action so face-rocking, and starring monsters so testicle-shrinking that it would satisfy the legions of sci-fi and horror fans everywhere who have been mulling about in a state of greasy irritation for the last four years. That's a pretty lofty goal. Does Alien vs. Hunter achieve it?

How do you take a more as bad as Alien vs. Predator and make it worse? It's easy! Just follow these steps: 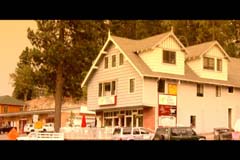 This is literally the entire town. And the building on the left is never seen again.Step One: pick a bad location. Instead of an space station or, God help me, an intergalactic jail, Alien vs. Hunter takes place in a tiny American town. When I say "tiny," I'm talking a total population of eleven. Which brings me the next point.

Step Two: fill it with characters nobody cares about. There's no Ripley here, no Kane, no Ash, no Dutch or Dillon, hell, not even a loveable cat. Instead, we have the staff of the town's newspaper, The Daily Acorn. This includes, star reporter Lee (played by William Katt), random Latino dude Javier, stoner Figgus, blonde ball-buster Hillary (Dedee Pfeiffer, ill-fated sister of Michelle), and head honcho Marcy. Then, of course, there are the cops who make the news - Sheriff Joel Armstrong and Deputy Garrison. And we need some people to read the news, so let's have irritating black chick Tammy and her mother Elaine. And to round things out, we need a lone gun nut for when the cops just aren't man enough for the job, so we have angry redneck Valentine and his miserable daughter Freckles. That's right, Freckles. And that's it. That's the whole town. Nothing, not a word, deed, or image, gives any indication that there is anyone else in the town other than these eleven yokels. 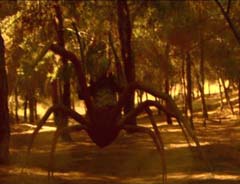 It's the stuff of nightmares. Or, it would be, if it could see, but it can't.Step Three: ruin the monsters. Okay, so the humans suck, but they're mostly there to be killed by the main attraction, our two monsters. So at least the monsters will be cool, right? Eh, not so much. The alien takes everything that's cool about the aliens from the Alien movies and everything that's bad about the monsters from Power Rangers and then throws out the cool stuff. It has an upper torso made of gray putty that vaguely resembles the Geiger Xenomorphs if they were made out of wet rags. The creature's lower body is spider-like and only seen in long shots, when director Scott Harper hopes we'll be able to ignore the crappy CG. It also doesn't help that we frequently see through the alien's eyes, and I have to say, how this creature doesn't render itself extinct by wandering into space traffic is beyond me. The thing can't see worth shit. It's like a myopic fly on bad acid. 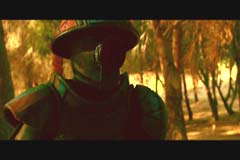 So the alien gets its own CG, but the hunter is a giant cycloptic metal dildo?The only reason that the alien survives long enough for there to even be a movie is that as bad as it may be, the hunter is a thousand times worse. The alien has a vague resemblance to the monsters from the Alien films. The hunter is obviously a Predator ripoff in terms of his role, but in appearance, well& picture the robot from Lost in Space with an extra dash of gay. The hunter has a sophisticated cloaking device, which is good because he moves like a jar of molasses with arthritis. Despite his laser rifle, the only time the hunter poses a threat to anyone is when they basically throw themselves in front of him, which, being as this is a shitty movie, happens pretty much all the time.