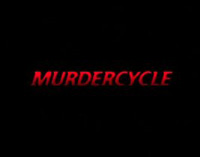 The Case For: "Murdercycle" clears up once and for all what is really in Area 51: rotting wooden shacks and miles and miles of empty tunnels.

The Case Against: The murdercycle doesn't really "murder" people, it kills armed soldiers in the heat of battle. You lied to me, "Murdercycle"! I can never trust again! 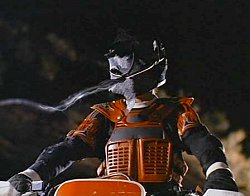 The story of the murdercyclist is a parable for all time."Murdercycle" opens in a hyper-secret government installation nestled deep in the boonies of the great American southwest. Inside this ultra-secure facility, a single watchman is sitting around twiddling his thumbs, glancing at monitors and occasionally taking notes on how completely noneventful his shift is. Amazingly, this super-classified outpost is disguised to look exactly like a rotting, worthless shack, down to the shoddy construction and layers of dirt. It's possible that the facility is there to guard the scummy pond nearby, at the bottom of which lie the corpses of Jimmy Hoffa and the original Paul McCartney, or maybe it's an actual barely-standing shack that the director managed to chase the meth addicts out of for a day or two while he shot his horrible movie.

As the night watchman tries to stave off the boredom inherent in running such a complex and essential black-ops installation, suddenly warning signals go off as one monitor picks up a lost dirt biker approaching a barbed-wire fence. The poor dirt biker dismounts and looks around helplessly. "I CAN'T BELIEVE I AM LOST AGAIN," he explains to no one in particular. Before the watchman can call in the men in black to take care of the imminent threat, another warning sounds and the watchman turns to another monitor just in time to see a low-flying meteor streak past his screen. The dirt biker also sees the meteor fly overhead and land nearby, and he soon finds the coconut-sized object lying in a shallow divot, surrounded by wisps of dry-ice smoke. The biker doesn't even have a chance to get off his bike before the meteor suddenly sheds its outer layer to reveal some sort of alien object, which shoots out tendrils that infect the biker with its essence, like many Japanese cartoons. Soon the biker is encased in a special suit of armor and the wimpy-sounding dirtbike has transmuted into a big evil-looking motorcycle. Wait, did I say motorcycle? I meant MURDERCYCLE.

Meanwhile, the security guard decides to investigate the rogue meteor strike, and sets out in his giant government-issue Ryder truck. He drives around, shining his flashlight at things and occasionally speaking into a collar-clipped walkie talkie that doesn't actually appear to have anyone on the other end, before driving up to the stretch of fence the motorcyclist was loitering at before. Everything looks perfectly normal, except for a stretch of fence with a large circular section somehow removed and the ragged edges glowing red-hot. The security guard has obviously seen Terminator 2 and knows how this will play out, and as he gets out of his truck and begins scanning for T-1000s, suddenly a engine revs behind him and he turns to confront the murdercycle, which has appeared out of nowhere a scant twenty feet away. The security guard draws his sidearm and fires, but the bullets bounce harmlessly off the murdercycle's hard-plastic exterior, and it retaliates by firing a horribly rotoscoped laser beam at the guard's truck, blowing it to hell. The guard runs off, briefly hiding in a nearby ghost town, before the murdercycle again catches his scent and chases him through an open field, hitting him with a barrage of laser beams and eventually running him over.

The scene shifts to a run-down unit of low-income housing where a shirtless man is sitting at his kitchen table, toying with a handgun and gazing wistfully at a set of dog tags. Before he can do anything drastic like shoot himself and abort this horrible movie, a MP knocks on the door and tells him to report to General Hubert immediately. Sergeant Kirby cleans up and reports to the general, who fulfills every "slimy military man" stereotype up to and including constantly gnawing on a ratty cigar, where Kirby is informed that he will be leading a special mission about which no one can know. The general hints that if all goes well he may be able to get Kirby "reinstated", which makes me wonder why a man who is no longer an active-duty soldier is apparently living on a military base. Unfortunately, before this mystery can be resolved, the movie moves on. 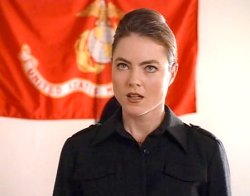 Mind reader Dr. Lee practices the ventriloquist dummy expression she will wear for 95% of the movie.Later, the team is assembling in a meeting room where two idiot privates are reading comic books and trading stupid quips. I should mention that apparently the creators of "Murdercycle" are big comic book fans since all the characters are named after comic book artists, and their expository dialogue shows their inability to relate to the world through any other medium, like in the following exchange:

It goes on like that but I had to stop transcribing before my brain started throwing itself against my skull in an attempt to knock me unconscious. The "Invisible Woman" to whom the privates were referring is introduced as "Dr. Lee", on loan from the "Second Sight program," which conducts "telepathic and psionic research." Despite the fact that this movie is apparently supposed to take place in the "real world", as it were, no one bats an eye at the bona fide ice-queen psychic in their midst. Also introduced are "Dr. Adams", some sort of forensic specialist, and "Mr. Wood", the CIA spook who is leading the mission. The mission is apparently to infiltrate the deserted town of "Prairie Dog, Colorado" and figure out what happened to their run down hovel of a secret government facility. Despite the fact that they will be operating entirely within United States borders, they are told that this is a "radio-silent" mission and if they are not back at the rendezvous point in 36 hours, planes will fly over and bomb the place to hell. Sometimes I think the Marines take things a little too seriously.

Soon the team is out in the field, wandering through the brush and gawking at all the trees and rocks and dirt. "Christ, I hate nature," one of the marines says, which means he must be awfully miserable for about 95% of his life. Upon reaching the old shack, the CIA agent Mr. Wood tells the rest to stay back, as he's the only one authorized to gaze upon the treasures that lie within. As Wood shuffles towards the installation, the scene cuts to the murdercycle lurking nearby, watching Mr. Wood enter the cabin with its patented color-shifted Murder-Vision. Wood enters the cabin, which is literally secured with a screen door, and searches the place for any hostiles hiding behind the collection of Apple IIEs and Amigas that line the walls like in any good top-secret government base. As Wood continues scouring the cabin for VHS tapes and notepads, Dr. Lee explains that her telepathy is actually called "psychometry," which allows her to feel the "inner life" of inanimate objects. This idea was taken from the 1988 Jeff Goldblum comedy "Vibes," which is to say that it is stupid.