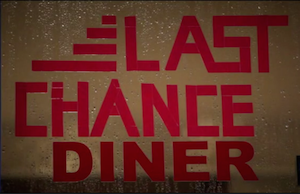 What it lacks in plot, writing, style, charm, direction, and taste, The Encounter makes up for with a rich and engaging cast of characters. Characters like "Cop who stands out in the rain all night just to stop people by dramatically turning around and looking at them like he's about to say 'You got a purdy mouth, boy' and brutally rape them on the hood of his patrol car":

We have to think that most directors, in response to that guy's performance, would say things like "no, Jesus Christ no" or "this is a traffic stop, maybe tone down the homicidal mania a little?" or even "there is no fucking reason for your character to have akimbo shotguns, put those away god dammit." (We honestly didn't think the phrase "akimbo shotguns" was going to come up in this one, but here we are.)

By the way, we lied, that guy and his shotguns are the only rich and engaging character. Most of the other assholes trapped in the diner are too boring to even describe, although we did thoroughly enjoy Jesus trying to convince the one girl to dump her boyfriend for not being pious enough. He actually says, and we quote, "He should love ME more than he loves you!" Yep, Jesus Christ: once the savior of all mankind, now a jealous side-piece.

Coming in at the very, very bottom of the parade of assholes are the brow-beaten husband and his ice queen wife, who get special mention for not even being interesting enough to warrant flashbacks like everyone else. In a dramatic conclusion worthy of their amazing character arcs, their marriage is saved by Jesus just going "come onnnn, you guys, stay married or I'll be sooo mad" for 90 minutes until they give in and call off the divorce.

The Encounter is complete drivel, and incredibly boring to boot. The only reason we can imagine anyone ever wanting to watch this movie is if they have a deep and irrational hatred of smug guys with soul patches, and will take any opportunity to watch a movie in which one of them is killed. Or if not killed, at least lured into hell by Satan himself:

We hope he comes back for us before we have to watch The Encounter 2: Paradise Lost.