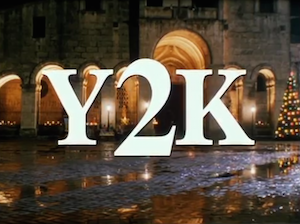 Overview: There are about a thousand ways to make a crappy movie about Y2K, but this one skips right past all of the computers and technology stuff and just goes straight to the aftermath where people are living in the jungle and setting elaborate wooden traps everywhere. Okay, so there's no global computer apocalypse and they're living in the jungle because they're farming cocaine, but close enough for us.

The Case For: If by some outside chance you're an interior decorator working for the Pentagon, you hate your job, and you really want to make other people miserable, there are lots of great ideas to be found in Y2K, including "multipurpose NORAD command center/supply closet/big pile of rusty shit", and "the war room from Dr. Strangelove converted to a roller rink and set up for couples' skate."

The Case Against: Used up the title "Y2K", which could have easily gone to a much stupider movie about computers and the Internet, but instead we get this rehashed jungle commando bullshit. 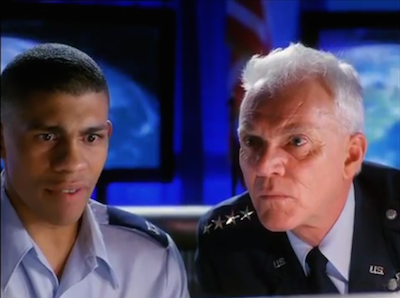 We'll be honest, we were pretty excited to stumble across a movie called Y2K. There are few phenomena in this world dumber than a) Y2K paranoia and b) Hollywood treatments of anything involving computers circa the 1990s, and a low-budget attempt at a melodramatic doomsday thriller based on the fucking Y2K bug and a nuclear missile silo starring Louis Gossett Jr. sounded like a recipe for world-class cinematic failure. You'll probably be both relieved and disappointed to find out that Y2K (aka Terminal Countdown) has almost nothing to do with Y2K, or computers, and in fact 95% of the movie takes place in a South American jungle and revolves mainly around Ewok-style wooden death traps, Gulf War syndrome, and Russian accents that would be too cartoonish for an episode of Rocky and Bullwinkle.

There is one expected stereotype that Y2K delivers in spades, and that's the socially retarded, comically inept whacker hacker, who seems to have missed his true calling in life as a court jester:

Now, we don't doubt that his character was 100% written to be totally insufferable in every way, but we still have to give actor Jaimz Woolvett credit for really going above and beyond in making every moment he's on screen into pure soul-rending agony. A little tip on the house, though: we know having a memorable name is very important to actors, but "Jaimz Woolvett" - who some of you might recognize as some sad, fallen version of the "Schofield Kid" from Unforgiven[1] - is memorable for all of the wrong reasons, especially if you're playing characters like this one.

Speaking of acting, we were doubly excited to see two titans of the D-movie world getting top billing in Y2K: Malcolm McDowell (who shockingly - and disastrously - actually tries to sound like not-a-British person in this movie) and Louie Gossett Jr. (who will always be JERRY from Enemy Mine in our hearts.) As expected, those two provide the only watchable moments of the movie, and of course they're only on screen for 10%. Although as much as we love Malcolm, we can't think of a worse casting choice for a hardass American army general, because he's more all-consumingly British than high tea and crumpets in the Queen's rose garden. He's worse at doing an American accent in this than the guys from Monty Python, and those were intentionally bad.

On the other hand, Lou Gossett Jr. as a slightly unhinged retired army colonel/grizzled VA escapee is an amazing fit. There's a brief scene in the movie where LGJ just melts into the shadows of the ancient missile silo he designed, and starts to go all Solid Snake on the hostile commandos trying to commandeer it. But never mind that, because as soon as he gets going, he changes his mind and just walks out the goddamn back door to whine to his best coke-lord buddy to please come and shoot them for him instead.

This brings us to the main theme of Y2K: total, pervasive disappointment. On top of the complete letdown of a premise, there's a long list of potentially interesting setpieces throughout the movie, which are ruined every single time:

Actually, that last one was ruined before Jaimz could spaz out all over it, because the rope and harness are so triply-redundant secure that a zipline ride at Walt Disney World would be significantly more dangerous.

[1] Jaimz somehow managed to find his way into this movie after Oscar-sweeping masterpiece Unforgiven, in case you were wondering.