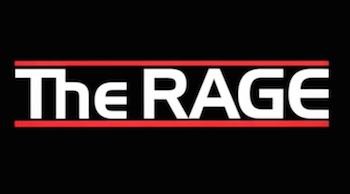 Overview: All we know about The Rage is that it's a weird combination of lukewarm crime drama, fetish film about completely absurd and massively pointless car chases, and a documentary about Gary Busey squatting in some backwoods mud shack in full camo gear making rape faces into a wide angle lens. If only the third part was the entire movie, it might have been art.

The Case For: The first-person Gary Busey crazed psycho killer rapist victim point-of-view cam would be a great addition to the psychological Ironman event at the Nano-Augmented Dystopian Cybertronic Future Transhumanist Mentalist Olympics of 2048.

The Case Against: If you've never dreamed of seeing Gary Busey burst into flames like a Tibetan monk and be launched 100 feet off the back of an exploding speedboat, this might not be the movie for you...and also you might be a joyless inhuman monster. 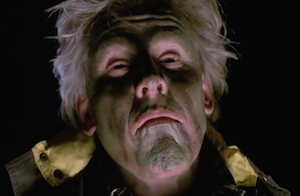 That's our pitch. Don't let any soft-bodied turd ticklers out there give you a line of shitbull about the entire middle hour of the movie being a hollowed-out void so barren that nothing even vaguely resembling a plot or characters could ever survive there. Everything and everyone in this movie exists in one of two states at all times: drifting and/or exploding. Both of these states are of course bookended by copious amounts of (often poorly timed and comically inappropriate) swearing. And we're not talking about the time Danny Kimbleton figured out how to write "80085" on his calculator watch in 3rd period math here, either--our best guess is that the creators were shooting for something a little more between the mile markers of "Quentin Tarantino getting his dick caught in a zipper" and "The Friar's Club Roast of Gunnery Sgt. Hartman, hosted by Andrew Dice Clay".

The swearing is particularly important, because for the most part this movie feels suspiciously like one of those runaway failed TV pilots for yet another crime drama that some asswipe(s) refused to let die on the chopping block of good taste because they got a little too attached to it, and so decided to just start shoveling mountains of cash and cocaine into like some kind of delusional steam engine, hoping it would magically transform into a movie. Naturally this means they had to try to cram in as many 'fucks' and 'shits' and 'holy fucking shits' and 'well I'll be a goddamn son of a shitty mother bitch's shit-fucking shitass' as possible into every scene, and constantly be talking about rape, erectile dysfunction and AIDS, just so we all know that this is a Serious Adult Movie for Serious Adult Grown-Ups and not a savagely recut TV-14 parade of matchbox car explosions and Gary Busey grimaces. You can practically hear the hilariously disastrous/awkward line redubs like "You're nothin' but a [fudge sickler]" or "I'm gonna [hug] the [spit] outta you, you [ugly] [witch]"!" ala Die Hard 2. Although it's pretty hard to take anything seriously when a supposedly high-octane action movie seems to be plucking scenes wholesale straight out of Austin Powers and National Lampoon's Christmas Vacation:

OK, wait a minute, let's backtrack for a second here to something we missed that might not be coming across from these videos, since we only kept the good parts. One word: boring. Boringness is another state through which all beings and things move and operate in the rich, complex universe of The Rage. For every two minutes of action scene, there seems to be about 20 minutes of pointless bullshit about FBI internal politics, or the worst male-female police team since Condor showcasing their non-existent chemistry, sexual and otherwise. The Rage even manages to make combination gun battle/car chases interminably dull by the end. Eventually we resorted to killing time by coming up with a list of things that are almost as boring as The Rage, things like: 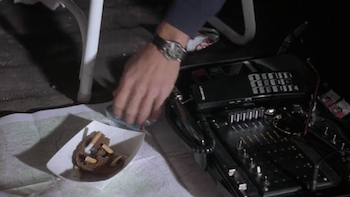 A cigarette butt sandwich - the breakfast of champions

Somewhere between all of the flying, vaguely car-shaped explosions, there are some vaguely people-shaped silhouettes who could loosely be called "actors" wandering around and shooting all kinds of pointless words out of their dumb, weirdly-shaped face holes. Lorenzo Lameass broodily phones in his very best angsty Point Break-era Keanu Reeves impression as FBI special agent Nick "The Mind Hunter" Travis - we can't really tell you how he came by that nickname, since the only things he actually seems to be hunting in this movie are gonorrhea, throat cancer, and firebombing intramural soccer teams, but we can tell you that they refer to him as "The Mind Hunter" this one time to make him seem really cool and deep and stuff. His bacon-mouthed off-brand Sandra Bullock partner in Law-Crime and uncomfortably inorganic sexual tension-building joins in to help make Let's Be Cops 2: Loosey Busey the thoroughly depressing experience that it is.

When we weren't nodding off, we managed to piece together something vague about the FBI hunting down a serial killer. So just what do the very best of our nation's crack forensic psychology minds from Quantico have to do to lure out the nation's deadliest and most wildly unpredictable mass murderer and bring him to justice? Well, we have no fucking clue, and neither do the writers apparently, because they just decided to have her genius plan be getting on the local TV news to talk about Gary Busey's dick for five minutes to bait him. And it works, of course. Of course, it works. It works! Of course, it does, why wouldn't it work?

As you've probably guessed since we've been name-dropping him in every other sentence, Gary Busey provides the only watchable parts of this whole movie. He steals the show as an utterly insane backwoods militia leader, which is of course the role he was born to play and has clearly been preparing for via method acting every day of his weird psychotic imploding-gopher-faced life. The only person in this movie who ever attracts even a tiny amount of attention away from Gary Busey is his girlfriend/homicidal life partner, who is the embodiment of manic pixie girl, but taken to its horrifying logical conclusion (cutesy indiscriminate manslaughter cosplay). As a parting gift, here's one more heaping dose of Busey on the house: