The most obvious clue that Jon Turteltaub and co. really, really wanted to hit the mainstream with this one is that they actually tried to get the Barbarian Bros to tone it down. Sure, they're still twin retards who argue about pissing, wear stupid hats, and pop off their shirts and flex at the slightest provocation. But the antics in Think Big fall well short of the brain-damaged moose calls and giddy severed-head puppetry of The Barbarians. That movie was a goddamn train wreck, but at least as a train wreck it was slightly interesting to watch. Think Big is more like a model train wreck; restrained, carefully orchestrated, and above all terminally boring.

Speaking of which, let's turn to the plot, such as it is. Think Big is pretty much a high-concept movie, with the pitch being "what if my grandma's clunky TV remote could control pacemakers, tanks, and laser guns that also exist for some reason?" Alright, it's not a good pitch, but it still rates a solid C-, well above, say, the premise of Click. Throw in the Barbarian Brothers as incompetent truck drivers, a child genius sidekick, and the requisite evil faceless corporation, and you've got yourself a movie! If there's one thing we've learned about big evil faceless corporations from watching these dumb movies over the years, it's that they're literally run almost entirely by middle school-aged children. Wait, what?

Yes, here at TechnoConglomoSyndiCorpoDyne, we care about the little people. The really little people. Just take little Billy Swanson here: before we found him, Billy was a wreck - totally unemployed; no wife, no house, no car; no speedboat, no kids; no Roth IRA or 401k; hell, depending on what he wore to school that day, he might not have two pennies to rub together by the time he hit Mrs. Brumgarten's 4th period Social Studies class. We took Billy and gave him the "opportunity" to take a "voluntary" one-way bootstraps ride all the way to the top of mount capitalism courtesy of the Applied Sciences & Slave Labor Fungineering division, and today he's one of the world's foremost designers of super invasive spore-deployed neuromanipulating Holo-Shriekers(tm).

Alright, so the all-powerful super device that can control every circuit on earth, and indeed the entire applied sciences division at TechnoGloboCongloSyndiCorpoDyniCrappoDomo, is hamster-wheeled almost entirely on slave labor power of a back room full of geeky 90s wunderkinds and chunky Fred Savage lookalikes held hostage by sinister men with ponytails and threats as hilarious as "BILLY, IF YOU DON'T FINISH THOSE WEATHER MACHINE SPECS BY LUNCH TIME I'M CALLING YOUR PARENTS TO TELL THEM YOU WET THE BED." 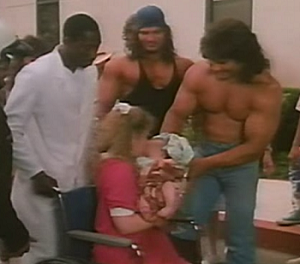 Mommy, why does that baby have two shirtless, retarded daddies?That's all just from the first 30 seconds of the video, too. We haven't even covered the Austro-Hungarian Mafia guys who like to loudly announce their assassination targets to anyone within earshot, or that the UI of the universal remote involves mashing random buttons and praying that it works on the device you're standing in front of. Starting to actually think for more than two seconds about the proceedings brings us to more basic questions, like "who the hell would hire two guys to drive the same truck, especially when they both weigh as much as a pregnant hippopotamus and one of them doesn't actually do anything except put on silly costumes and chant gibberish like a drooling lobotomy patient?"

You've probably gotten the point that this movie has a list of offenses against logic, sanity, and human morality a mile long. And yet somehow, mystifyingly, the worst part is when all of the above comes to a screeching halt about halfway through, giving way to one long, tedious car/truck chase across the country, which culminates in...exactly jack shit. The evil Dr. Gary Old Man catches up to the elusive two-retard convoy, they snap his magic remote in two, and he just says "oh well" and leaves.

Then David Carradine, the mischievous rapscallion who's been repeatedly hijacking their truck over and over in like every other scene for the entire movie only to find out that he doesn't actually know how to drive it (djhaww shunks, bonk, tink!) amazes everyone by&hijacking their goddamn truck again. Only this time he does actually know how to drive it (somehow), and he rides off into the sunset. Of radiation poisoning. The sunset of radiation poisoning you can only ride off into if you're driving a stolen truck full of irradiated shit to death for no good reason. Because then the movie fades back in to reveal the nuclear waste in the back has been spilling all over the place and he's already losing fistfuls of hair by about mile marker 20. By the way, did we mention that David Carradine is the "Einstein of Repo?" Because he sure did.

And then we're pretty sure there's something about the Bros and their new spunky teen sidekick selling their own version of those insanely dangerous doomsday remotes that can be used to hack into bank vaults and stop peoples' pacemakers and crash passenger aircraft at will to consumers at comfortably sub-Radioshack prices just to buy a new truck to dick around playing dressup and making stupid noises in, but we might have blacked out by then and just imagined that last part. God we hope so. This movie was so tedious it made us long for the heady, sweaty adventure of The Barbarians. What kind of monster are you, Jon Turteltaub?