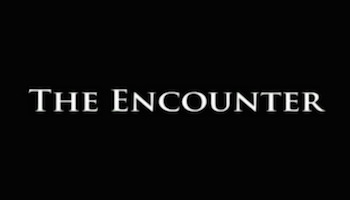 Overview: Five idiots driving around in a thunderstorm are herded into a magical roadside diner, where they get free magic bread and a really long, stupid sermon from Jesus Christ himself. One of them gets sick of the bullshit and drives away, where he is personally led into hell by Satan himself. We still think he made the right call.

The Case For: We're really glad the Jesus-movie cabal tapped David A.R. White to direct this picture, mainly because sitting in the director's chair keeps him too busy to step in front of the camera for his usual sickening Sunday school rodeo clown antics.

The Case Against: At 7.1/10 on IMDB, this is probably the highest-rated movie we'll ever review by a comfortable margin. This isn't really a case against the movie itself, more of a case against IMDB's stupid rating system and its susceptibility to born-again sock puppets. 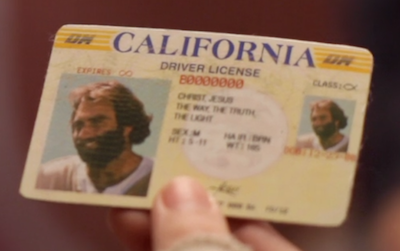 Wouldn't it be great if someone took The Man From Earth and replaced all of the actors with crash test dummies, made the main character so literally and obviously Jesus that it says so on his fucking shirt, and evaded all of the mildly interesting questions with a spiritual smokescreen worthy of a procrastinating minister who finished writing the Sunday sermon on the bus ride in? Well good news, an answer to our prayers has arrived, and it's directed by omnipresent holy-movie spirit David A.R. White! Halle-fucking-lujah.

And lo, the premise of The Encounter was spake unto us thusly: five strangers show up at a roadside diner waiting out a storm, where the proprietor reveals that he is Jesus and he's sick of their shit sinning ways. Well, maybe "reveals" is a little strong, since he likes to punctuate his 2,000-year-old rehashed magic tricks by saying "I'm Jesus" over and over and over:

We're not omniscient or anything, but in our humble opinion Jesus maybe should have spent a little time updating some of his classics, instead of continuing to do them in a way that Criss Angel could easily make look 10 times better and more miraculous. Then again, neither his captive audience of diner-trapped sinners nor the actual target viewing audience of The Encounter are known for being particularly quick-witted or observant, which is probably why he's also wearing a name tag that says "JESUS" in big block letters.

Anyway, JESUS is the sole owner and proprietor of the Divine Intervention and Free Will Crushing Roadside Diner (open 24/7), which is a great place to learn such deep, spiritual lessons as:

We're having a hard time seeing how the Ten Commandments and classic "love thy neighbor, judge not lest ye be judged" stuff from the Bible leads to those particular moral guidelines, but admittedly that book hasn't had a new edition for a few centuries, so maybe this is just the hip, new, in-your-face Y2K version of Christianity[1].

In fact, the only thing stupider than those half-assed attempts at moral platitudes is...actually, pretty much anything else that comes out of neo-Jesus's glory-and-light-hole, come to think of it. His limitless supply of all-knowing wisdom includes such nuggets of truth as "the most popular section of any newspaper is the obituaries" and "sure, there was a bit of light genocide in the Old Testament, but they were probably all sinners, and anyway forget all that, LOVE AND PEACE UNTO YOU!" Our personal favorite is a long, rambling diatribe about how much worse the world is today than back in his day, Jesus apparently having somehow forgotten about all those Roman guys going around nailing people to 2x4s and leaving them for dead.

[1]The Voice of God has been updated slightly too; instead of burning bushes and tablets, He is now literally nothing but a voice that whispers in your ear, completely indistinguishable from a bout of schizophrenia.