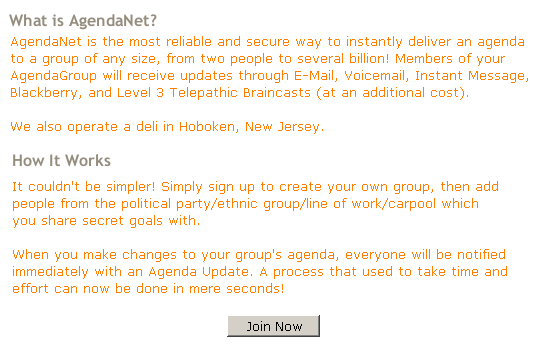 2. Sign up for accounts on IMDB, vote Short Circuit into its rightful place as the greatest film of all time

3. Aid greasy Counter-Strike players by sitting in their laps and headshotting their online opponents with mechanical precision

1. Raise taxes for "social programs" across the country, secretly funding Air America for another six months

2. Oppose spending money on space program because, seriously, who ever gained anything from exploration?

3. Keep up the good work with the Daily Show and Colbert Report

2. Charles, are you there? Come help grammy use the pc computer please.

3. I have some hard candies for you in my purse. They've melted and rehardened so many times over the years that I have no idea what they originally were, but I think they're peach flavored.

2. Keep our strategy of winning the Iraq war secret until presidential race begins, reap the rewards when Corbomite Manuever prevails

3. Meet with powerful businessmen, Osama Bin Laden, and the men who faked the moon landing in a secret underground location and just cackle with glee as money rains from the money vents in the ceiling

2. Locate the third ancient relic, completing the ageless ritual to summon Alga'Ythora from the murky depths of the Broward County public swimming pool

3. Bring back the Arsenio Hall show at any cost

2. He's tailing me, I'm going to hit the brakes on this bird and watch him sail past me right into my sights!

1. Relax, maybe catch a movie or play some video games

2. Keep in touch with friends and family

3. Get caught up on household chores

1. Wear coats straight out of the pages of Dick Tracy and/or overly elaborate hats

2. Chime in to tell the guys in the booth that you had deep conversations all of the coaches, players, and refs earlier and clumsily paraphrase what they said, starting with "Hey," or "Listen,"

3. Conduct interviews during the game that go on forever, asking a backup field goal placeholder to recite each state's capital while on the field someone is returning a kickoff for a 104 yard touchdown while on fire