An Evening Stroll with Friends 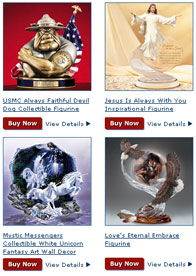 One day the Lord and Savior Jesus Christ was out frolicking amid a herd of unicorns while majestic eagles soared overhead. Jesus was enjoying one of his weekly conversations with the USMC Always Faithful Devil Dog, a brutal drill sergeant with a knack for dehumanizing recruits, turning them into mindless killing drones.

"I love the way the Stars and Stripes unfurl dramatically behind you," Jesus said.

"Thank you, my child," spoke Jesus appreciatively. "But now I must visit others in this wondrous land Father has given us!"

The Son of God quickly climbed on the back of a beautiful white unicorn, shimmering in the evening light. The sky was a miasma of pastel colors, and they made it seem as though the mythical steed had a rainbow for a coat.

"Ride, my Mystic Messenger! We have friends waiting for us!"

Less than a mile away there was a beautiful sea, itself a reflection of the dazzling sky above. In this great sea swam a pod of dolphins, darting under the waves and then launching themselves above the water's crest for a little taste of the sky. These dolphins were positively incandescent, though, paradoxically perhaps, they were also translucent. Glimpsing their stunning forms was to take in the whole of the dazzling undersea landscapes, rich in colorful coral, fish, and other sea creatures.

On the nearby shore under the watchful gaze of a lighthouse, Elvis Presley was getting ready to sing to a group of courageous firefighters. They had traveled a long way to see the King, riding thousands of miles aboard the Johnny Cash Express Train from the distant Hawthorne Village. Their journey was wrought with peril, but as one would expect, all obstacles were quickly overcome.

Along the way the Johnny Cash Express collided with the Spider-Man Express, and the heroic firefighters quickly turned from passengers to lifesavers. With Spider-Man's super strength and the determination of the firefighters, a tragic situation was quickly transformed into one of hope. A nearby contingent of United States Marines came and erected a flag, and helped Spider-Man and the firefighters get the trains back on track and heading in the proper directions. No one was hurt, thankfully. It could have been a disaster if not for quick thinking.

Johnny Cash, a little embarrassed for letting the accident happen while he was engineering, apologized to the firefighters. "You guys jump through burning rings of fire every day, and we all owe you a debt of gratitude!"

"I'm going to give a performance that will burn the house down," said Elvis. "So it's a good thing you fellows are here!"

The firefighters chuckled knowing that they were being rewarded for their courage and bravery, and for never leaving anyone behind. In a strange twist of fate, some of the more cosmically aware firefighters were struck with a sudden and strange vision that prompted them to turn toward the New York City skyline. They did so expecting to see something terrible and cruel. Instead they saw the beautiful sight of fireworks exploding around the World Trade Center. The distant booms of the fireworks provided backup percussion to one of the King's chart-topping hits.

In the woods to the west Jesus stopped his steed at a watering hole, hoping to refill his bota bag and refresh his parched lips.

"Drink from this watering hole, mighty unicorn," said the Son of God. Although he felt he was on the clock, he transubstantiated a small amount of water into wine to relax his nerves.

The unicorn greedily gulped up the water, but there was no danger of it ever running dry. It stopped when its keen ears picked up something rustling in the nearby woods, quickly looking upward for any signs of predators.

Jesus narrowed his gaze into the dense forest, ready to draw on his trusty hunting rifle should threat arise. 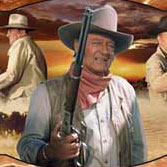 "Whoa there, pilgrim! It's just me, the Duke," said the unmistakable voice of John Wayne.

"John, my son! It is good to see your friendly face."

"That's a mighty fine unicorn ya got there, pardner! I was just on my way back to the cottage to fetch my own. We're riding over to Dale Earnhardt's ranch."

"That makes two of us. Ride with me, and let friendship enhance the beauty of the journey!" 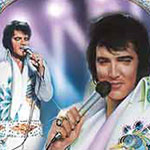 "You know," Elvis spoke, "you guys came a long way to be here. It would be a shame not to give you the best show ever." 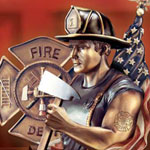 The firefighters cheered enthusiastically, knowing Elvis wasn't going to let them down. Still, they were stunned and delighted when Pope John Paul II rode out from behind the lighthouse on the back of his hand-painted Harley-Davidson motorcycle. The bike was a work of art, emblazoned with stirring images of eagles in flight. The two then knocked it out of the park with a rousing rendition of "Jailhouse Rock."

Miles away and far from the ocean, an historic accord was taking place at the Earnhardt Ranch. Dale, using his tremendous pull with the people of the world, was able to arrange for a meeting between General Robert E. Lee and the leader of the Native American peoples. The two were to smoke the peace pipe and unite as friends.

It was night now, and the land was shrouded in darkness. A heavy moon hung over the sky, iridescent and full. Wolves gathered on nearby rocks to howl and survey the land for prey. The wolves gathered on this night would see two riders approach, though they would know better than to strike. These riders were John Wayne and Jesus Christ, men far too noble and skilled to be hunted. 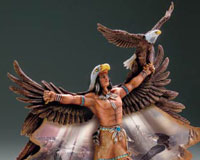 The riders entered the ranch and were greeted by Dale Earnhardt and General Robert E. Lee. The two were quickly introduced to the guest of honor, the noble and wise Indian Chief, representing the native peoples of the land.

"My tribe has longed to become one with spirit of wolf and eagle," spoke the Indian Chief.

"And your tribe has longed to become one with God. Perhaps if God made all things, then he made wolf and eagle."

"You are wise beyond your years, Chief."

"I'll say! The Chief and his people are all right!" trumpeted a delighted Dale Earnhardt.

General Robert E. Lee, sensing it was time to do his part, cleared his throat. "Your people are great and wise, and I wish for peace and prosperity to flourish between our tribes. I offer you this gift, the beautiful Bichon Frise."

"You honor me with gift, Chief Lee," said the Indian Chief. "Bichon Frise has left paw prints all over heart!" The incorrigible dog lapped at the Indian Chief's face, showering him with love and affection.

The friends then shared puffs from an ornate, handcrafted Native American peace pipe, signaling their intention to never again wage war. With each puff the friendship grew stronger, and so too did the prospects of peace.

Everyone was an agreement. Tonight would be the perfect night for an evening stroll with friends.