Can We Get Through One Thanksgiving Without Hearing the Word "Nazi"? 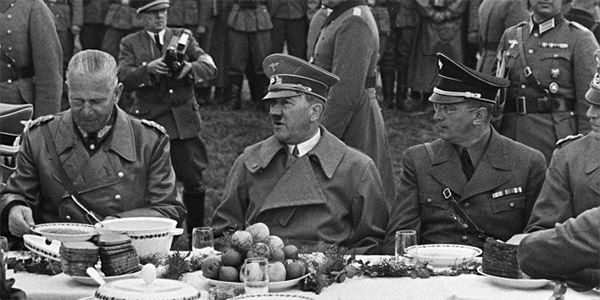 I swear, you two boys fight like cats and dogs. Especially you, Brian. Your brother Alex has been away at college for months, and this is how you treat him? "Nazi." What an awful thing to call someone! Honestly, I'd prefer if you'd use any other insult at this dinner table. I'd hate to see what your great-grandfather would do if he was still alive and heard you throw around that word so casually. I mean, he'd probably clam up and start drinking more heavily than normal, like he did whenever someone mentioned The War. But you can bet he wouldn't be happy about it the next day!

Now Brian, you know your brother Alex has always had problems making friends. Back in high school, he'd shut himself up in his room and do god knows what on that Internet all day and night. You know how happy I was when he told me he found a group he could relate to? Just the other night, he and his little gang went to an inner-city church to do some much-needed repairs in the dead of night. I know for a fact because I'm the one who picked up eight cans of spray paint for them at the hardware store. And I can only imagine what those parishioners thought when they woke up and saw Alex and his group's handiwork. I bet they were absolutely shocked by what that group of like-minded boys did under the cover of night!

Now, if I recall, it wasn't so long ago that a certain son of mine named Brian fell in with a certain crowd at college. What were they again? Occupy whatever? I'm not sure what you accomplished, Brian, but I sure remember a lot of pointless marches and blocking streets so hardworking moms like me couldn't get to their jobs. Alex is out there making a difference, and making headlines--at least I only assume he is. That Facebook is so informative I've up and cancelled our newspaper subscription as of two months ago. I was skeptical about that Internet, but without it I would've never heard that President Obama nearly made it illegal for people to pray at NFL games while the ball was in play. It's the kind of story the mainstream media is too afraid to touch!

Besides, Brian, I've never seen Alex just so engaged with his studies. As a former straight C student, he's finally found his calling. Just the other day he was telling me he challenged his professor! I mean, can you believe that? This from the boy who wet his bed until his 17th birthday, when I formally stopped checking to see if he wet his bed. Some English class of his was trying to make him read a book he did NOT agree with--Uncle Tom's So and So, I think. Well, I've always taught you boys to fight for what you believe in, and Brian did just that. He got that professor and his "dangerous agenda" right out of that college of his, and instead of being forced into a literature class, he gets to learn to code! That sounds much more practical than trying to learn something from a dusty old book.

And Alex has come back from college with such a flair for the arts! Just look at this clever little pattern he etched into the mashed potatoes. He says it's an ancient Buddhist symbol that's become very popular lately. Now, can you believe that? Our little Alex... I'll tell you, he's picking up a lot more from life than you do hanging around those soup kitchens. You tell me those people need to eat, but something tells me they've never heard of double coupon day down at the Kroger's.

Now, I think we all need to put aside our differences and finish Thanksgiving dinner as a loving family. And, Alex, honey: I'm very excited in your newfound interest in calisthenics, but you'll have to lower that downturned palm if you want me to pass you the yams.