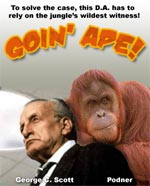 Tagline: To solve the case, this D.A. has to rely on the jungle's wildest witness!

Plot Outline: A veteran Texas D.A. (George C. Scott) has to bring an orangutan cross-country to testify in a murder trial against a sinister man working for the Soviet consulate in Dallas (more)

Red Cobra: Full immunity.
Hanson Murtaugh: Immune? When I'm done I'll drink your blood from a wooden bowl. I'll take your children and make them mine.

Red Cobra: Desperation is a stinking fog on you.

Hanson Murtaugh: Your neck is pretty. I can't wait to see you swing by it.

Cassandra Hemperfen: You can't take him. This is his home.

Hanson Murtaugh: He's a witness to a crime. I decide where his home is.

Hanson Murtaugh: Great. (looks to Cassandra) Undo your pants and lie down in the straw there for me.

Hanson Murtaugh: You were born of hell, Podner. You stink like a toilet mat lit on fire.
Podner: (hooting noises)

Sam Peckinpah: You sent it wrong again, you son of a bitch. I'm coming down there and I'm gonna flatten your fucking pug-ugly nose you piece of shit!

Hanson Murtaugh: I sent your driver back to hell in a burning box.

Red Cobra: No! Tell your beast to pull me back up. A trial! I deserve a trial! What justice is this?

Hanson Murtaugh: What justice? My justice. THE justice.
(Murtaugh nods to Podner and the orangutan lets go of Red Cobra)
Hanson Murtaugh: This court finds you guilty, comrade.

I rented this movie thinking it would be good for the kids and I walk in and the guy is pulling the man's eye out with the knitting needle! There were more scenes of that nature. Two rapes! One is too much and this movie has two rapes! NOT FOR KIDS. NOT FOR FAMILIES! Why put a monkey in a movie like this? To TRICK CHILDREN AND MOMS?! This is the worst movie ever and the people who made it should be in jail. It's filthy pornography and violance! ZERO STARS! Worst movie ever! Try Dustin Checks In for better!