My Fling with Criss Angel: Mindfreak

I see him pull into the driveway, and then he sits in his car for five or six minutes doing incantations or something, and it looks like he's doing wizard moves with his hands, like, making the prince symbol, or like, executing small-scale karate moves or something. Finally he comes up to the door and knocks, but when I open it, he just runs back to his car really fast, checking over his shoulder every few strides to make sure I'm still following him. I climb in the passenger side and he starts explaining how he just influenced me to go to the car with him, even though he hasn't yet asked me to directly. He won't drive to the restaurant until I've admitted that he's freaked my mind. 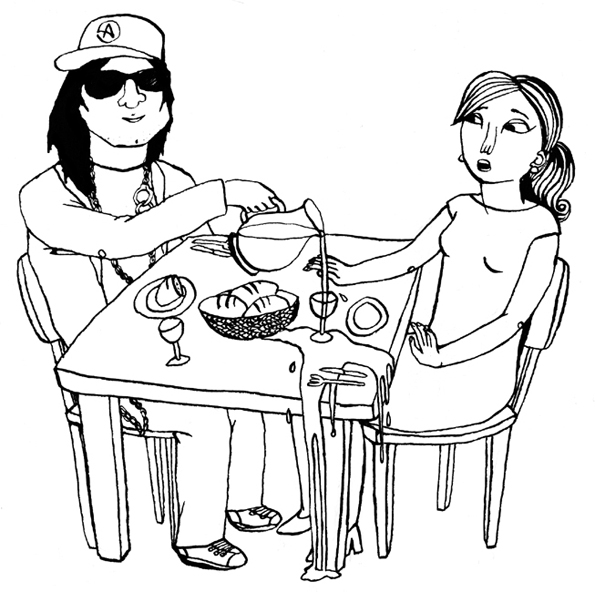 The whole ride he's talking up the restaurant. He tells me we're going to a pretty crazy place with kind of a nontraditional atmosphere, and that I might get a little freaked out. When we get there I realize that he has been talking about Outback Steakhouse. We are seated at the table, and all of a sudden he won't stop asking the waiter for pitchers of water to do magic tricks with. For the first one, he offers me a glass of water. I'm actually pretty thirsty so I say yes. He starts pouring the water but the glass never gets filled, it's all coming out the bottom. He pours the entire pitcher, just straight up onto the table and the floor. Another trick is just him pouring water onto the complimentary bread. He says there's more to it than meets the eye, but it doesn't really seem like there is.

So we leave the restaurant after sharing two big helpings each of water and bread, and we start the exciting ride home. I am in fear for my life for almost the entire trip. We're taking an exit off the interstate when he tells me to take the wheel. I kinda start to reach over but then he rips the whole assembly off of the steering column and hands it to me. I cut a sharp right but we hit the guard rail pretty hard and the ambulance doesn't get there for something like 45 minutes. I'm more or less uninjured but I think Criss has a really severe concussion from the way the EMTs are swarming around him and gesturing worriedly. He tries to sneak playing cards into their pockets to set them up for a future trick at the hospital, but they notice right away and give him back the cards.