Ashley Todd was about to head out the door to go for a late night food run when it suddenly struck her that she might forget what she was setting out to buy.

"My memory's usually so good," she said to her kitchen table, "but maybe I should make a list."

She searched and searched, but couldn't find a scrap of paper anywhere.

"Now what am I going to do?" she said to the microwave.

Then an idea struck her. It was a great idea. The perfect idea.

"The only thing I really need right now is bread. I'll just scratch a B on my face with the edge of my credit card."

And she did. She admired the fading pink B lightly etched in her cheek.

Then she kissed the giant poster of McCain that covered like half her bedroom wall, and she left. Except as she was going she also said: "It would basically be impossible for me to carve a B in my face and then forget doing it. That's the best part of this idea.

"No way in hell I would forget this. Nope. Not gonna happen." 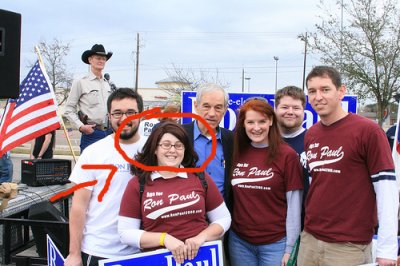 "But I'm telling the truth," said Ashley. "I don't know what else you want to hear."

"It doesn't matter what we want to hear," said Police Chief Nate Harper. He leaned back, and unbuttoned his shirt halfway. Sweat glistened from the landscape of curly hair and bronzed skin that was his chest. "Honey, we're only keeping you here until we can reasonably say you cracked and admitted it was all fake."

Ashley felt herself flush with frustration, especially her cheek, which definitely had a real wound shaped like a backwards B.

"I don't believe it. I thought you people were here to help," she cried.

Assistant Police Chief Maurita Bryant threw down her styrofoam coffee cup in disgust and strode across the room.

"Don't waste our time, little girl!" Bryant sneered. "This has wasted so much time. ... It's just a lot of wasted man hours."

"I guess she still doesn't get it," said Harper. He took one thick meaty hand and dug into the flesh at the base of his broad neck. The skin began to warp and stretch like warm play-doh. His entire face peeled back revealing Barack Obama.

Bryant grabbed her pony tail and yanked up like she was taking off a hat. Her mask popped off instantly. It was also Barack Obama.

"Soon, little girl, your pitiful human race will belong to us," said the two in unison. They began to laugh. Cold, cruel, inhuman laughter.

Ashley looked back and forth at the two Obamas, their faces wet and slimy, like newborns. The backwards B was hard red against the soft white of her cheek. Then she grabbed her ears and pulled sideways.

"Oh, my bad. I didn't realize," the third Obama said, shaking off the last of the Ashley mask. "It can be hard to keep track of all of us. Whew, we almost tried to conspiracy each other!"

"Classic," said the first Obama. "Ok, let's get these disguises back on and go bullshit the press."